A Little Night Music goes right to the source 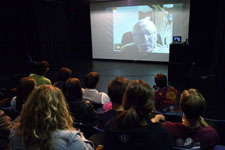 Stephen Sondheim’s A Little Night Music was waltzing across the stage at Brock University this past November. To prepare this gem of lyric theatre the director and company of actors and singers recently took their questions right to the source.

Using a video conference link-up from the famed Friars Club in Manhattan, the Canadian actor and director Len Cariou answered our students probing questions about the development of A Little Night Music for the 1973 Broadway premiere. Cariou won a Tony nomination for the role of Frederic Egerman in the original production. He recreated the role for the 1977 Harold Prince-directed screen adaptation with Elizabeth Taylor. Six years later he won both the Tony and a Drama Desk Award for his portrayal of Sweeney Todd: The Demon Barber Of Fleet Street. His recent credits include the 2002 casting in the award-winning drama Proof. Cariou’s film credits include Flags of Our Fathers, About Schmidt, Thirteen Days, and The Four Seasons. He played the father in the 2007 film 1408. On television, Cariou has appeared in The West Wing, Law & Order, Star Trek: Voyager, The Practice, Ed, The Outer Limits, and multiple episodes of Murder, She Wrote. He had a continuing role in 2006-2007 as power broker Judd Fitzgerald in the Showtime series Brotherhood.

Cariou spoke with candour and humour about the creation of the musical and his challenges as a young actor. For almost an hour he regaled the students of the Departments of Dramatic Arts and Music with personal stories and professional insight. After saying their goodbyes and making a promise to report back to Cariou about their experience, Brock student Trevor Rotenberg – who plays the role of Frederic Egerman in this production – exclaimed, “I was really moved by his enthusiasm and generosity. Cariou made the challenge of bringing the role to life so much more real for me – he helped me understand how through music and lyrics we can talk about very real and important human things. He helped me see my future: this was the real deal.” After the meeting with Cariou the company rehearsed for three hours, energized by his infectious enthusiasm.

A fresh young approach to a whirl of intoxicating music, dance and witty lyrics, the production of A Little Night Music ran in the Sean O’Sullivan Theatre November 12-14, 2009. The show was directed by Virginia Reh and designed by David Vivian, both of the Department of Dramatic Arts. Harris Loewen of the Department of Music lead a cast of 17 talented young performers through this musical based on Ingmar Bergman’s Smiles of a Summer Night.