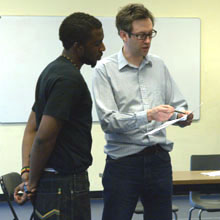 Hailed by the New York Times as “one of the most innovative and essential theatre artists to emerge from American experimental theatre in the past decade,” Obie-award-winning New York City playwright and director Richard Maxwell and members of the New York City Players visited Toronto and the Brock University campus for the first time April 18th and 19th, 2009.

Students, faculty, and members of the theatre community engaged in a discussion with Richard and members of the New York City Players in an informal workshop that included a mini-retrospective of their productions to date and exercises demonstrating principles that are central to their work. The evening concluded with a site-specific show entitled Showcase that takes place in a hotel room. Showcase plumbs the thoughts of a businessman absorbed in the world of his private, hotel room as he and his shadow examine his past.