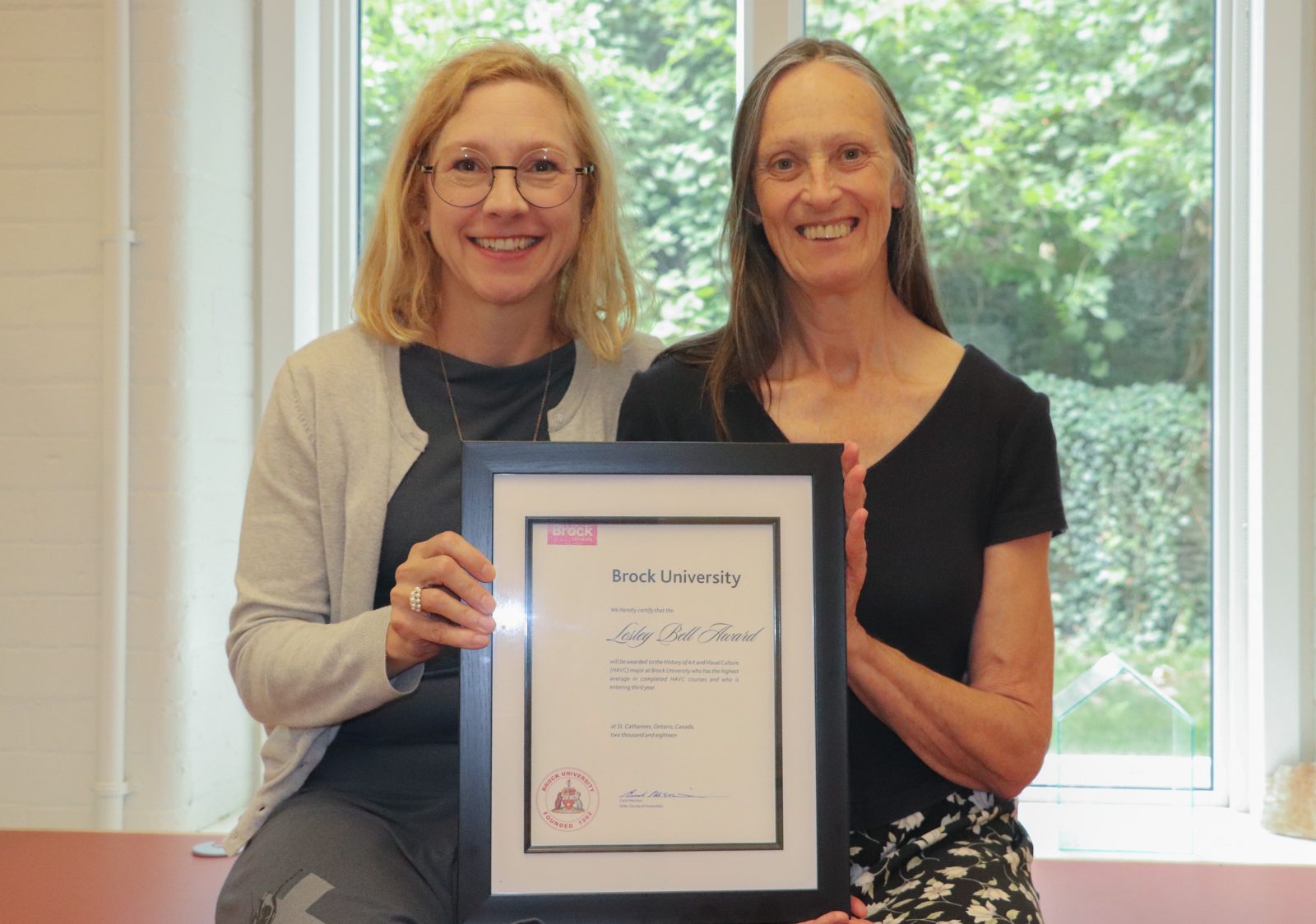 Lesley Bell, right, sits with Visual Arts Chair Donna Szőke, one final time in the Learning Commons at the Marilyn I. Walker School of Fine and Performing Arts before Bell’s retirement. The department marked her retirement with the creation of the Lesley Bell Award, to be presented to the Art History student entering third year with the highest average.

(From The Brock News, Friday, Aug. 31, 2018 | by Sarah Moore)
When you walk into the Learning Commons at the Marilyn I. Walker School of Fine and Performing Arts (MIWSFPA), you are greeted by the always-smiling face of Lesley Bell.

The long-time Co-ordinator enthusiastically helps students, staff and faculty alike on their quests for knowledge, is always eager to explain how a piece of software works and has no shortage of stories to share about art, the University or life in general.

It is her passion for the work that she does, and for the people she works with, that inspired the Visual Arts Department to pay tribute to Bell’s legacy with a student award named in her honour.

Created in recognition of her retirement at the end of August, the new Lesley Bell Award will be presented annually to the third-year History of Art and Visual Culture major with the highest average.

Donna Szőke, Chair of the Visual Arts Department, said the award is a fitting way to recognize student accomplishment as well as Bell’s time with Brock, both academically and professionally.

“Lesley has been an invaluable resource to our department,” she said.  “Her constant generosity of spirit, curiosity and kindness has touched the lives of the many students, instructors and staff of Visual Arts, as well as Brock as a whole. We celebrate Lesley with this award.”

Bell, who has been employed with Brock for 34 years, is the longest-serving staff member in the Visual Arts Department.

She remembers her journey through the ranks at Brock fondly, starting from her decision to enrol as a student in 1983.

While working part time as a waitress, Bell would always share her love of the arts with her coworkers. As a mature student in her 30s, however, she was skeptical about going back to school.

After some prodding from coworkers — and realizing there was a night class at Brock that she could attend which wouldn’t interfere with her work schedule — she decided to enrol.

“I started an art history class with Sylvia Osterbind, a fine arts librarian who also taught the Art History course for a fledgling program in History and Studio Arts at Brock,” Bell recalled. “Sylvia was a formidable teacher. I sat at the back of the class and watched her stride in front of two projected images of ancient art in her sensible shoes, waving her pointer and lecturing with her succinct German accent.”

From that point on, Bell was “hooked.” She would close down the bar, working until the wee hours of the morning, and then wake up for early morning seminars.

“I suddenly noticed ‘classical’ architectural elements on the buildings on St. Paul Street when riding the bus home from Brock, and I met some people who are still important friends,” she recalls fondly. “I started Brock thinking I was not smart enough for university, but that course showed me that I had a mind that could ask questions, and I had eyes that could see the creative world around me.”

After graduating with an Honours B.A. in Visual Arts from Brock University in 1988, Bell then continued her studies and earned a Master of Library Science degree from Western University in 1993.

From there, she returned to the place where it all started and began working at Brock as a Visual Arts resource co-ordinator.

Over time, her job would evolve to include oversight of the Brock University Art Collection and the former Sean O’Sullivan Art Gallery on the main campus.

Bell would eventually conceive and help design the Learning Commons in the new MIWSFPA building in downtown St. Catharines, where her duties expanded to include managing the equipment kiosk and supervising student monitors. She constantly worked to develop opportunities for the space to further benefit students and the community, and never stopped striving to make it a more inclusive place to study and congregate.

Bell is not one to boast about her accomplishments or bask in the spotlight, however. Especially, she says, when she was simply “doing her job.”

But when it comes to the student award in her honour, she is proud that her legacy will serve to inspire future students to also pursue their passions.

“I don’t know if I can say this emphatically enough: this award means more to me than the decades of service to Brock and is a legacy that actually stuns me,” she said. “We are all here because of the students that we train, nurture and mentor.  However, we seldom get a chance to know that we ‘make a difference.’ So, it is deeply significant to me to be given this gift from the department.”