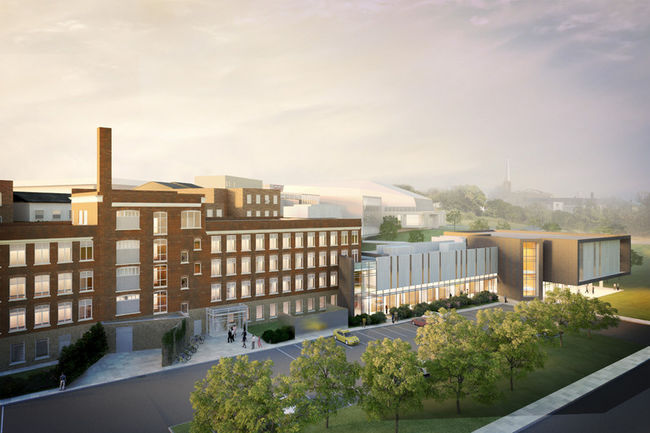 Brock University will shell out a little more cash in a new deal to build its downtown arts school.

The university announced it’s reached a deal with Bird Construction Group to build the Marilyn I. Walker School of Fine and Performing Arts. Bird was the low bidder in October when Brock received a raft of over-budget bids for the school, to be built at the old Canada Hair Cloth building.

Bids came in about $6 million over budget, but Brock vice president of finance Brian Hutchings said the school negotiated a lower cost with the company. He said figures still have to be finalized but the school will likely end up paying around $30 million, rather than the $26 million budgeted.

“We’ve been able to do some value engineering on the project. We’re approximately two to three million dollars less,” he said.

Scott Walker, the school’s campus planning, design and construction director, said Bird’s bid came in around $32.2 million. He figured the school is saving around $2.1 million.

Most of the design changes, he said, involve using cheaper materials. They’ll use cheaper bricks, cheaper roof materials and even cheaper toilets.

Curved walls will be straighten out to save money, he said, and the foundation design will be simplified.

Hutchings said the changes include scratching the use of suspension ceilings and leaving a formerly covered walkway uncovered.

Most of what was cut, he said, was “some nice-to-haves, but nothing that was necessary.”

Walker said the school cut everything it feasibly could without compromising space. It was by and large “a whole bunch of mostly small things” that have added up.

“If we take any more out of it, we’d have to make it a smaller building.”

Hutchings said Brock is prepared to go over its initial budget to build the school.

“At this point, we’re obviously going to look for any other donors for the building. The building’s looking for a name,” he said.

He said the school would also free up 45,000 square feet of space on campus. That means more space for tuition and programs.

The early work would mostly entail fencing and work on the foundation.

The deal follows bids on the school coming in well over budget in October.

It also follows bids on the city’s nearby performing arts centre coming in over budget in August.