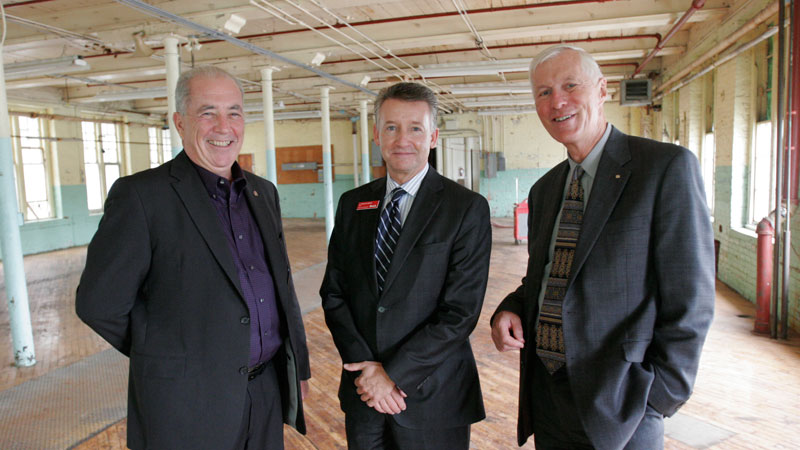 The Rotary Club of St. Catharines has donated the largest single gift in its 91-year history to Brock University.

The $100,000 donation will benefit the effort to move the Marilyn I. Walker School of Fine and Performing Arts to downtown St. Catharines. The announcement came at a ceremony in the vacant textile mill that will be extensively renovated and expanded to house the new school.

Gifts like this are possible because of the support Rotary receives for fundraising efforts such as Ribfest or the annual Rotary TV Auction, which takes place this year Nov. 24 to 26, Crossingham said.

The donation is “a historic one, and an emotional one,” said Douglas Kneale, Dean of Humanities and a member of the team overseeing the project.

“I can tell you that Brock is ecstatic today,” he said. “This shows the power of partnership. We recognize that this is a huge commitment for Rotary to make, and we are thrilled they are helping to make this project come true for the benefit of the entire community.”

Due to open in 2014, the Brock project will relocate more than 500 students and faculty to the city centre. It is half of a major collaboration that will see the Walker School situated adjacent to a public Performing Arts Centre being built by the City of St. Catharines.