Who is the Internet’s Own Boy? 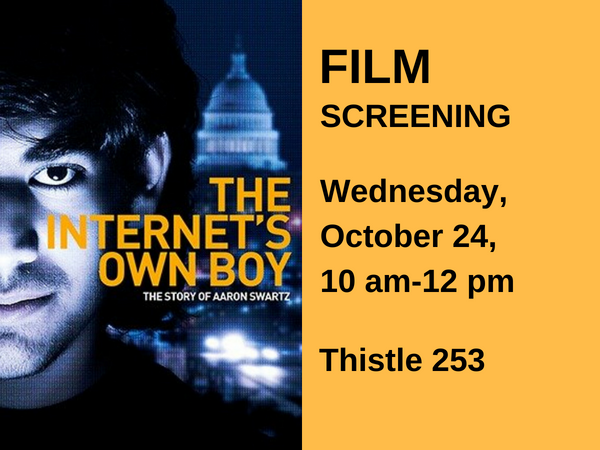 Aaron Swartz was a young man who, in his own words, wanted to save the world. Instead, and unfortunately, on January 11, 2013, at the age of twenty-six, Aaron Swartz hung himself. News of his death travelled quickly and for many people, his death was a step back in the movement towards open information.

Swartz was an extremely intelligent individual. He was reading novels by the time he was in kindergarten and by 14 he was working as a computer programmer / software developer.  Swartz was instrumental in developing licensing for freely sharing material and was a developer of the popular social-networking news site “Reddit”.  As Swartz’s career progressed, he grew to hate corporations and working in corporate life surrounded by rules. Swartz eventually decided that he no longer wanted to work with computers and became passionate about advocating for freedom of information rights.  Swartz did not believe people should have to pay to use software or access information. He became famous for using his internet account at MIT to hack JSTOR and download millions of academic journal articles. Swartz believed there was no wrong in his actions, nor did he see his actions as criminal and therefore declined a plea bargain. Instead he faced charges of wire fraud, and 11 violations of the Computer Fraud and Abuse Act. Swartz was strongly opposed to the idea of accessing information as “stealing”:

“Stealing is wrong. But downloading isn’t stealing. If I shoplift an album from my local record store, no one else can buy it. But when I download a song, no one loses it and another person gets it. There’s no ethical problem. The evidence that downloading hurts sales is weak, but even if downloading did hurt sales, that doesn’t make it unethical. Libraries, video rental places, and used book stores
(none of which pay the artist) hurt sales too. Is it unethical to use them? (2004)”

In 2008, Swartz co-authored and posted an article titled “Guerilla Open Access Manifesto”, which was to be used as evidence at his trial to prove his intention of distributing all of the articles he downloaded from JSTOR:

“Information is power. But like all power, there are those who want to keep it for themselves. The world’s entire scientific and cultural heritage, published over centuries in books and journals, is increasingly being digitized and locked up by a handful of private corporations… Providing scientific articles to those at elite universities in the First World, but not to children in the Global South? It’s outrageous and unacceptable…We can fight back. Those with access to these resources—students, librarians, scientists—you have been given a privilege. You get to feed at this banquet of knowledge while the rest of the world is locked out. But you need not—indeed, morally, you cannot—keep this privilege for yourselves. You have a duty to share it with the world.”

Swartz died before his trial began. His life as a genius who stood up for freedom and fairness has been immortalized in the film The Internet’s Own Boy. Please join us for a free screening of the Internet’s Own Boy on Wednesday, October 24th from 10am-12pm in TH253.  Tim Ribaric, Acting Head, Map Data GIS Library / Digital Scholarship Lab, will discuss the importance of the work Aaron Swartz was doing and how his activism is relevant for today’s libraries in the context of open source data.