Paywall: The Business of Scholarship 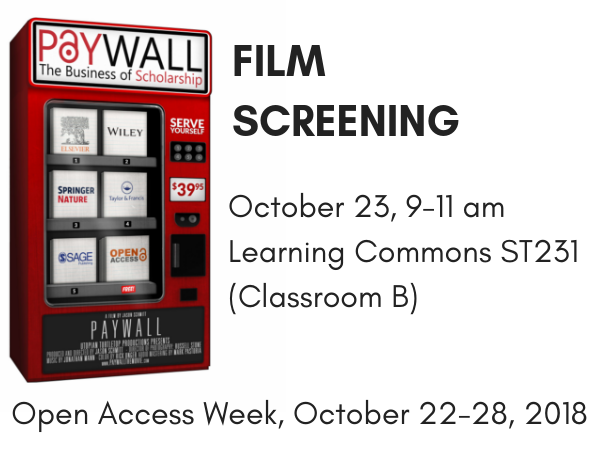 On September 5th, 2018 the documentary film Paywall: The Business of Scholarship made its global premiere. For those who are not entirely familiar with the world of academic publishing, this film provides an enlightening background on the process researchers take to publish articles and how members of the public then access that information. The film draws attention to restricted access to knowledge, specifically scientific journal publications.  Many students, researchers, and industry professionals cannot afford to pay the exorbitant prices charged by subscription journal publishers. This has been described as “holding scientific knowledge to ransom”.

The movie educates viewers on the 35-40% profit margins made by publishing giants. These profits are significantly higher than corporate giants such as Google, Facebook, Apple and Walmart. Further, the fact that much of the research owned by publishing giants has been publicly funded is also brought to light. Governments are funding research that is then held by companies such as Elsevier who charge tax payers to access that same information that their tax dollars originally paid for.

The practice of charging individuals to access journal articles is especially detrimental to health professionals, doctors, researchers, and even patients who cannot access information that could have a significant impact on medicine. The practice of charging for information also leads to a prejudicial dissemination of knowledge. For universities and medical professionals in countries where the funds are not as readily available as they may be in the United States, their studies and more importantly, their treatment of patients is critically impacted by their inability to access paywalled medical information. Often times, individuals are paying for articles that prove not to contain the information they were looking for to begin with and in countries where there are no budgets for such expenditures, it is not possible for them to waste money on articles that they can’t be certain contain beneficial information.

Paywall: The Business of Scholarship clearly highlights the negative effects of article paywalls and provides a background on how the lack of access to knowledge has sprung the OA movement to “democratize information.” Open access promotes inclusivity and efficiency and the ideas that “scholarship must be open in order for scholarship to happen” and “scholarship is a conversation and the only way to have a conversation is to know what everyone is saying.”

To learn more about Paywall’s and Open Access, the James A. Gibson Library will be screening the documentary on October 23rd, 9-11 am, Library Classroom B.