Thesis:Weighting Time: The Emergence of Western Mensural Notation as a Case Study in Meaning Making

Abstract: My research is informed by research in cognition, linguistics, musicology, acoustics, philosophy, aesthetics, theology and architecture, to delineate the bi-partite character of combinatorial meaning-making systems. I will demonstrate that meaning-making systems, such as music and language, consist of a biologically determined element, stemming from embodied cognition, and socially constructed elements which are culturally specific, but also culture-shaping. Further, I contend that the bi-partite condition of meaning-making systems is both permanent and essential. By this I mean that the biological and the cultural elements are not sequential steps in an evolutionary process, but concurrent and necessary parts of the combinatorial meaning-making system. I plan to use the emergence of mensural (measured) notation in the late Medieval to Renaissance periods as a kind of case to study to demonstrate how this meaning making process unfolds. 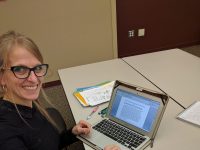