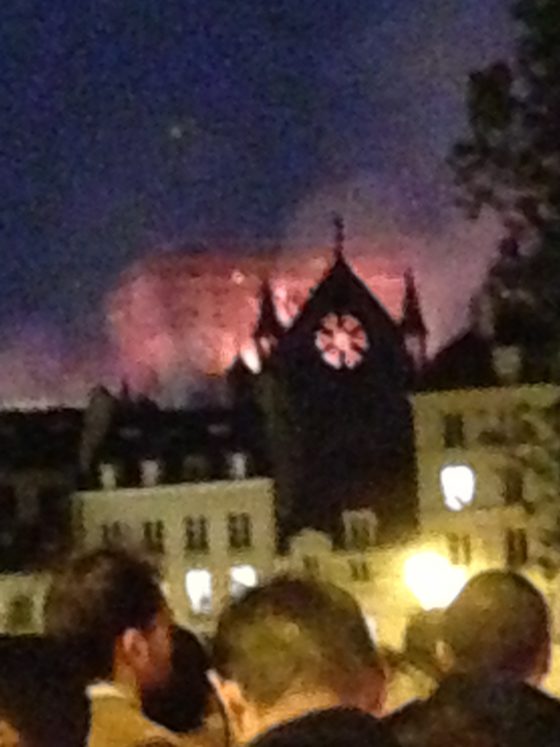 After graduating with a BA in French and Spanish, I began working at Franczak Enterprises as a translator and administrative assistant. I was part of various projects in the automotive field. My responsibilities included communicating with clients nationwide and translating material for events. I am grateful to have received this opportunity through my connection to Brock.

Brock has also given me the foundation necessary to continue my studies abroad. As of October 2018, I am pursuing a Master’s in Translation at the École Supérieure d’Interprètes et de Traducteurs (College of Interpreters and Translators), a faculty of the Université Sorbonne Nouvelle in Paris. Students with a trilingual combination, especially English-French-Spanish, are encouraged by the ESIT to apply. Entrance examinations are hosted around the world, including in Canada.

The Notre-Dame de Paris fire has shocked Parisians, who viewed the 850-year-old cathedral as a tangible link to France’s origins. I first learned of the fire while on campus. After class had ended, a peer and I decided to go see for ourselves what had happened. The fire had grown out of control by then and the surrounding streets were inundated with thousands of onlookers. Bridges leading to the small island where the cathedral stands were barricaded. We looked on from across the Seine. Many people are mourning what has been lost — none had expected harm to come to this ancient structure that had lived through so much.

The French section’s unique learning environment has provided myself and other students with interactive classes, dynamic research and work opportunities as well as engaging and thought provoking content. The Department of Modern Languages, Literatures and Cultures at Brock has high expectations of its students whom they help to realize and reach their full potential.

Before going to university I held the preconception that a university was an isolated, machine-like place that allotted no room for my own personal identity. […] After my experience at Brock University, and in particular my experience in the French programme, I wish I could turn back time and tell my younger self that there was really nothing to fear. […] Brock’s French programme is not the cookie-cutter image one would most often imagine when asked to think of a typical higher education programme; rather the professors by which I had the pleasure of being taught opened my eyes not only to French culture, poetry and literature, but to the plethora of universal questions and dilemmas that both faced our world in the past, and prevail today as relevant matters of interest. The study of French literature does not permit an individual to stay within the box; rather, such a programme almost certainly ensures that one will delve into, and further explore life in all of its complexity.

“The more languages you know, the more of a person you are.”  — The European Commission

Coming into the French Studies Program at Brock University as an Anglophone I was extremely intimidated, but I soon realized that through the support of my peers and professors that my undergraduate studies would be both fun and enriching. In my third year of study, I participated in Brock’s exchange program and studied at the Université de Nantes. It was during my studies abroad that I was able to live the language and culture that I had been learning about from my professors in lectures and labs. In my final year of studies, two French professors had an extremely influential role in both my academic and personal life and to them I will always be grateful. It was through their encouragement and guidance that I went on to complete a Masters in Studies in Comparative Literatures and Arts, also from Brock.

Despite being classified as a medium-sized university, Brock, and more specifically, its French Department most definitely has a small-sized feel. The professors have an open door policy that fosters optimum learning and development in their students. As a graduate of the programme, I have gained a wealth of knowledge on both an academic and personal level. The programme catered to my affinity for all aspects of French literature, culture and the arts. It is thanks to the programme, along with their amazing support staff that I have been able to excel within and outside of the classroom; I am more of a person today than I was five years ago when I began my studies. I always feel at home when I round the corner and enter Mackenzie Chown C Block. Venez à Brock, vous ne le regretterez jamais!

Well as a Brock graduate since 2010 I entered the work environment with the hope that I would find a bilingual position. In 2010 I was able to find employment in the medical field and now I have been working for the Ministry of transportation where Bilingualism is not just a requirement but a necessity. Being able to use both languages is a great advantage and I am proud that Brock has such an extensive and thorough French department.