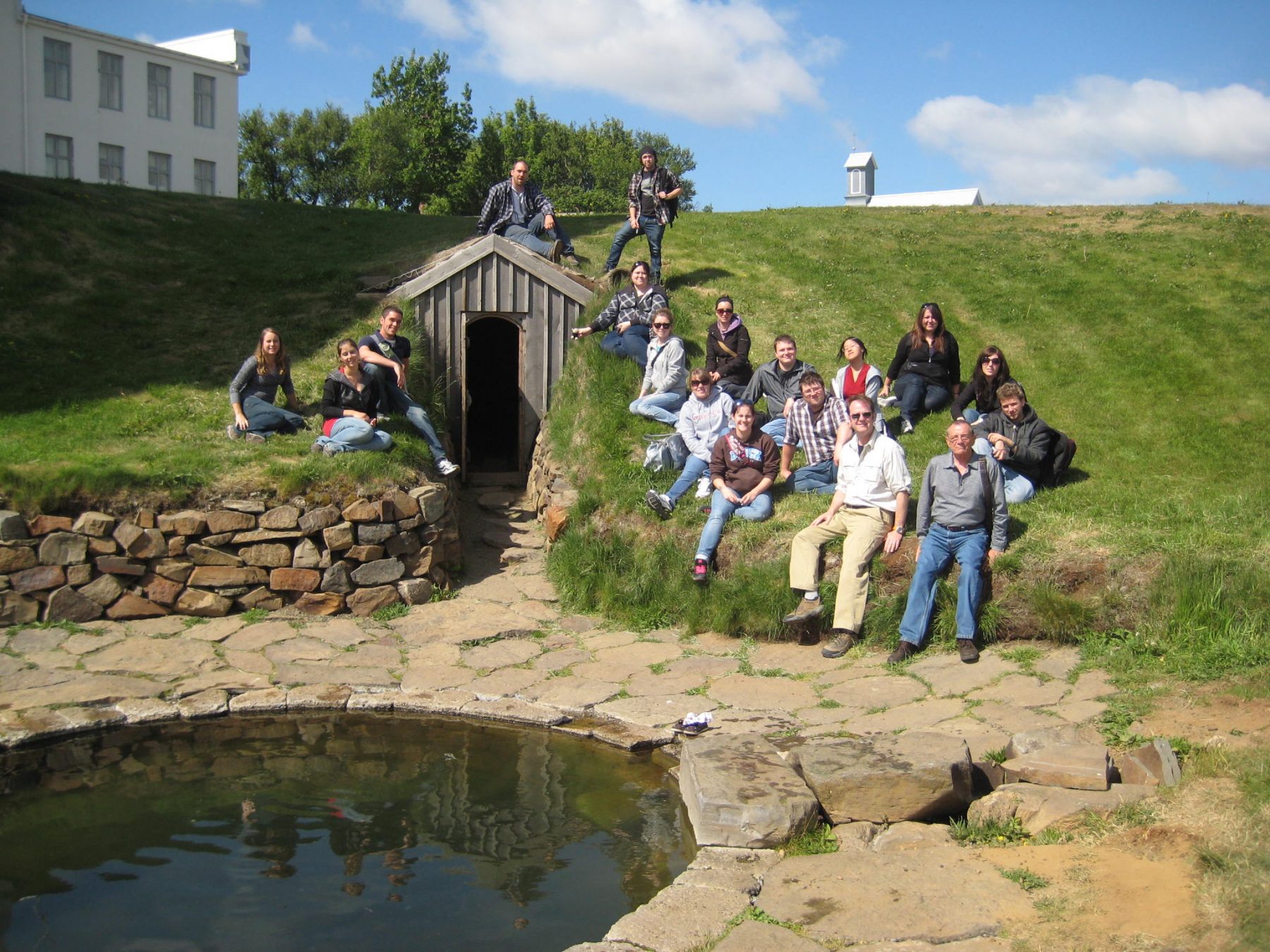 In June of 2010, twenty MARS students, accompanied by Professors Angus Somerville (Dept. of English) and Andrew McDonald (Dept. of History), embarked on a voyage of discovery to Iceland as part of MARS 3F50, the first ever study-abroad course offered in the MARS programme. The topic of the course was Viking Age and Medieval Iceland. Following three weeks of intensive course work at Brock familiarizing themselves with Iceland’s Viking Age origins and Norse culture, students and Professors journeyed to Iceland in search of Viking settlers, ancient settlement sites, and medieval manuscripts that provide vital clues to unlocking much of Viking Age Iceland’s hidden history.  Site and Museum visits were interspersed with free days in which students explored and experienced modern Icelandic culture for themselves. Along the way we met heroes of Icelandic legend like the warrior, poet and chieftain Egil Skallagrimsson, the hero of the classic ‘Egil’s saga,’ visited  the ancient farmstead at Stöng, buried by a volcanic eruption in 1104 and often described as ‘Iceland’s Pompeii’, experienced the natural wonders of glaciers, deserts,  waterfalls, and hot springs, and spent a full day at the famous Árni Magnússon Institute for Icelandic Studies, where students viewed and examined some of Iceland’s most famous medieval manuscripts.  In their free time students sampled local shopping, dining, and nightlife, experienced Icelandic pony riding and whale watching, and some of the more adventurous among them experienced subterranean lava tunnels and hiking on glaciers.

“My knowledge of Icelandic heritage and history has been greatly enhanced from visiting various sites and exhibitions because it is a completely different learning experience to see places and things in person as apposed to looking at images or reading texts in class. Through this trip, I was able to gain a certain respect for Icelandic culture as Icelanders seem to greatly value their past. I was also amazed by the fact that many Icelanders know the sagas and folk tales very well and in comparison to Canadian history and culture, many of us know little of our nation’s past. Visiting Iceland also helped to enhance the idea of its difficult geographic landscape which includes fields of volcanic rock, barren lands, many glaciers, flowing rivers, valleys, multiple small islands in the fjords, and small forested areas. Seeing the geography of the country plays a large role in understanding the settlement period of Iceland as it can help to explain why large areas were uninhabited, why their houses were built the way they were, and how settlers managed to survive both physically and economically.”