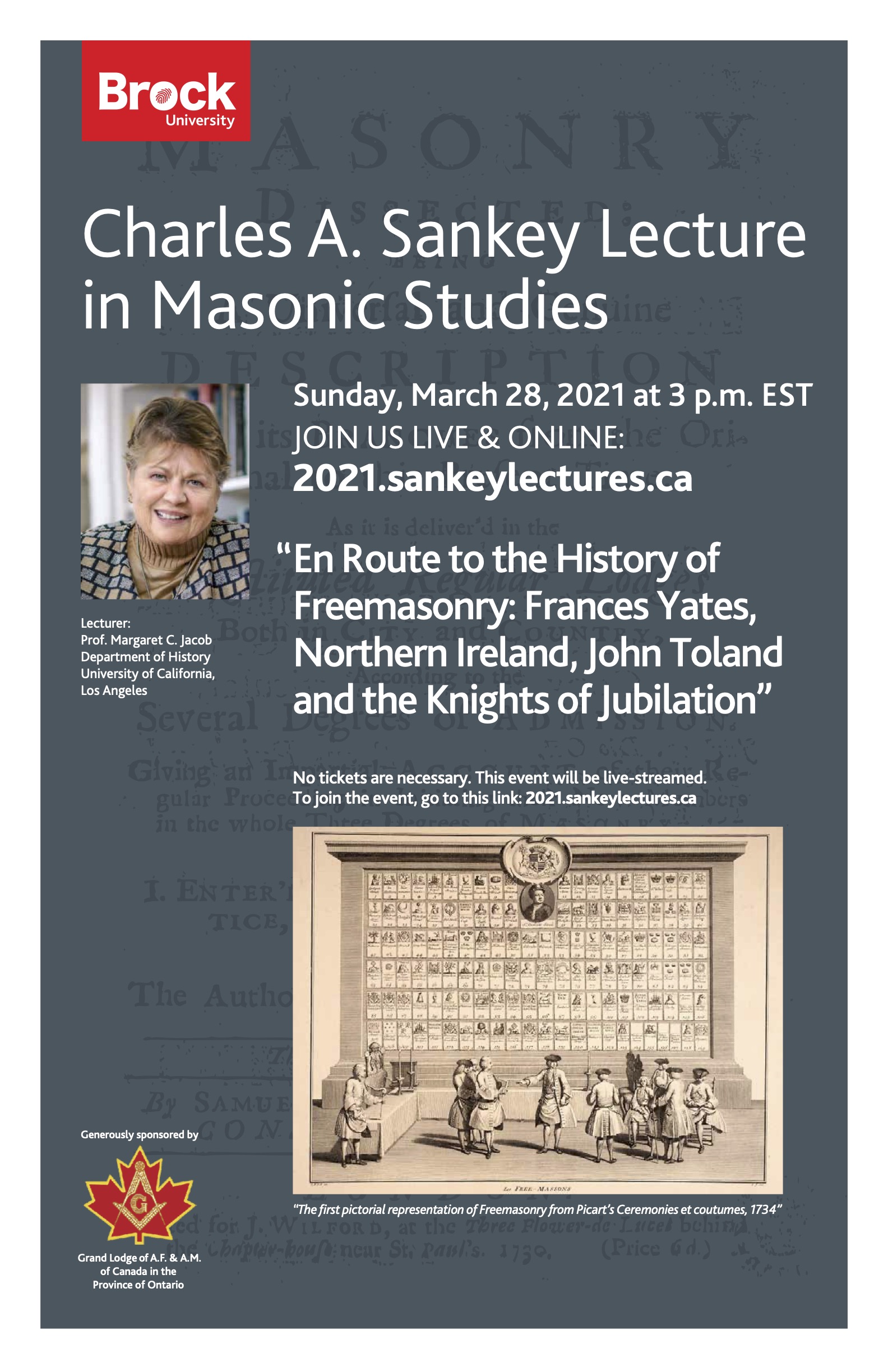 Thank you to Professor Margaret Jacob who presented at this years Charles A. Sankey Lecture on Sunday, March 28th, 2021!!

Lecture Preview
Professor Jacob will speak on “En Route to the History of Freemasonry: Frances Yates, Northern Ireland, John Toland and the Knights of Jubilation”. Margaret Jacob will examine her own historical development as she, as it were, ‘backed into’ the history of Freemasonry. She will present original eighteenth-century documents, as well as personal reminiscences, to illuminate how she went from studying the transmission on to the Continent of Newton’s science, winding up in the Dutch Republic, the early Enlightenment and a coterie of freethinkers, pantheists, political radicals, and not least, Freemasons.

The Lecturer
Margaret Jacob is an award-winning historian of European science whose many books and essays have shaped scholarly research, university education, and Masonic discussion over several decades. Her books address a wide range of important topics: from The Cultural Meaning of the Scientific Revolution (1988), to Telling the Truth about History (co-authored with Lynn Hunt and Joyce Appleby, 1994), to The First Knowledge Economy: Human Capital and the European Economy, 1750-1850 (2014) – just to name three of many possible examples. Her several important contributions to the history of Freemasonry include: The Radical Enlightenment: Pantheists, Freemasons, and Republicans (1981, 2nd edn 2005); Living the Enlightenment: Freemasonry and Politics in Eighteenth-Century Europe (1991); The Origins of Freemasonry: Facts and Fictions (2005); and Strangers Nowhere in the World: The Rise of Cosmopolitanism in Early Modern Europe (2006). Her most recent book (The Secular Enlightenment, 2019) also addresses Masonic subjects, while (yet again) putting them in the larger contexts of European political, intellectual, and cultural history. She has taught at several universities and is currently a Distinguished Professor of Research at the University of California, Los Angeles. She grew up in New York and has many Canadian cousins with whom she spent childhood summers on a farm in Georgetown, Ontario.