The Brock University Archaeological Society was begun in 1989 under the leadership of Dr. David Rupp and founding president Kevin Fisher. Their inspiration and dedication originally helped the group to thrive and it has continued to be an important part of life in the department ever since.

As a group, BUAS seeks to promote Classics to the Brock campus and the community at large. We continue to spend much of our time fundraising to help support students participating in archaeological excavations and study tours to Greece, Italy, and Turkey. We also seek to create a fun and welcoming social space for all Brock undergraduate students through our many events during the year including the annual student and scholarly symposia, as well as potlucks, BBQs, and movie nights.

Coming soon… In the meantime, interested students can contact Dr Adam Rappold, the BUAS Liaison officer in the Department of Classics: arappold@brocku.ca

Every year, BUAS organizes a student symposium in the fall, providing an opportunity for undergraduates to present academic papers and fieldwork experiences. In the winter we host our annual scholarly symposium, featuring faculty speakers from the Niagara region and beyond. Previous topics have included explorations of the borders of the ancient world, classical warfare, the body, dreams and oracles, and more.

2019 marked the 30th Annual BUAS Scholarly Symposium. The topic was “Sailing the High Seas: Seafaring in the Ancient Mediterranean.” The Symposium took place on Saturday, March 9th, from 11 a.m. to 6:30 p.m. in Academic South 215. The banquet took place at George’s Greek Village. 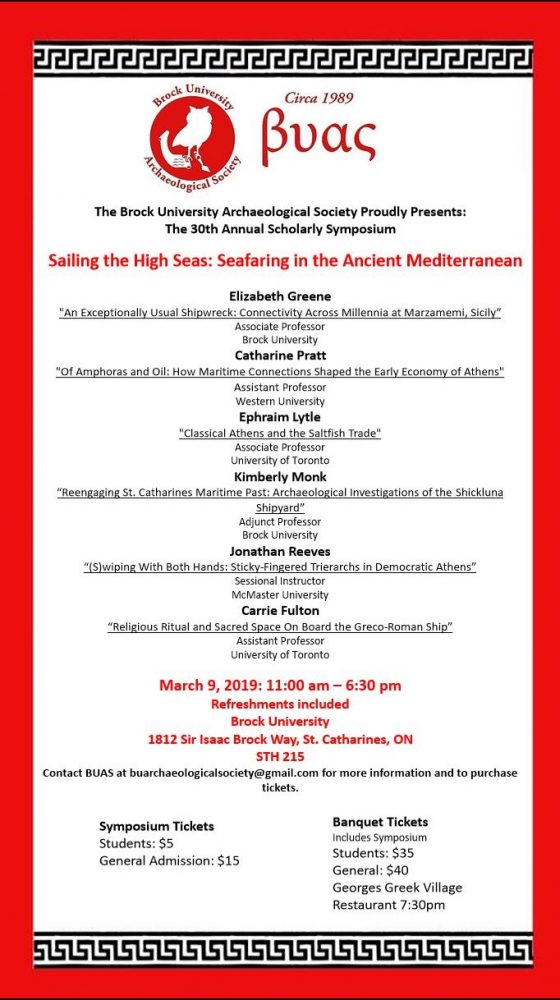 All students are welcome to join. Please write to buas@busu.net for more information.