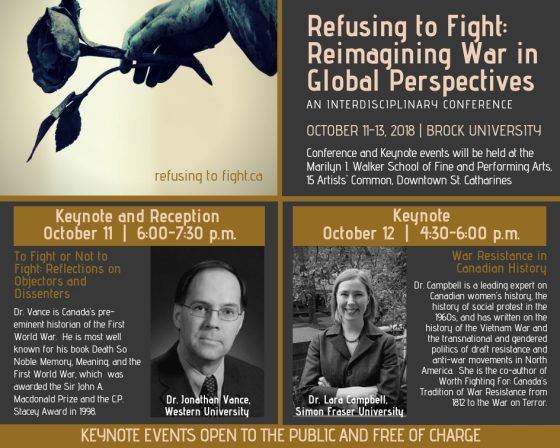 Brock University will host the Refusing to Fight: Reimagining War in Global Perspectives interdisciplinary Conference from October 11 to 13 at the Marilyn I. Walker School of Fine and Performing Arts, 15 Artists’ Common, Downtown St. Catharines.

The following keynotes are open to the public and free of charge:

October 11  |  6:00-7:30  p.m.
To Fight or Not to Fight: Reflections on Objectors and Dissenters by Dr. Jonathan Vance, Western University

Dr. Vance is Canada’s pre-eminent historian of the First World War.  He is most well known for his book Death So Noble: Memory, Meaning and the First World War, which was awarded the Sir John A. Macdonald Prize and the CP. Stacey Award in 1998.

Dr. Campbell is a leading expert on Canadian women’s history, the history of social protest in the 1960s, and has written on the history of the Vietnam War and the transnational and gendered politics of draft resistance and anti-war movements in North America.  She is the co-author of Worth Fighting For: Canada’s Tradition of War Resistance from 1812 to the War on Terror.