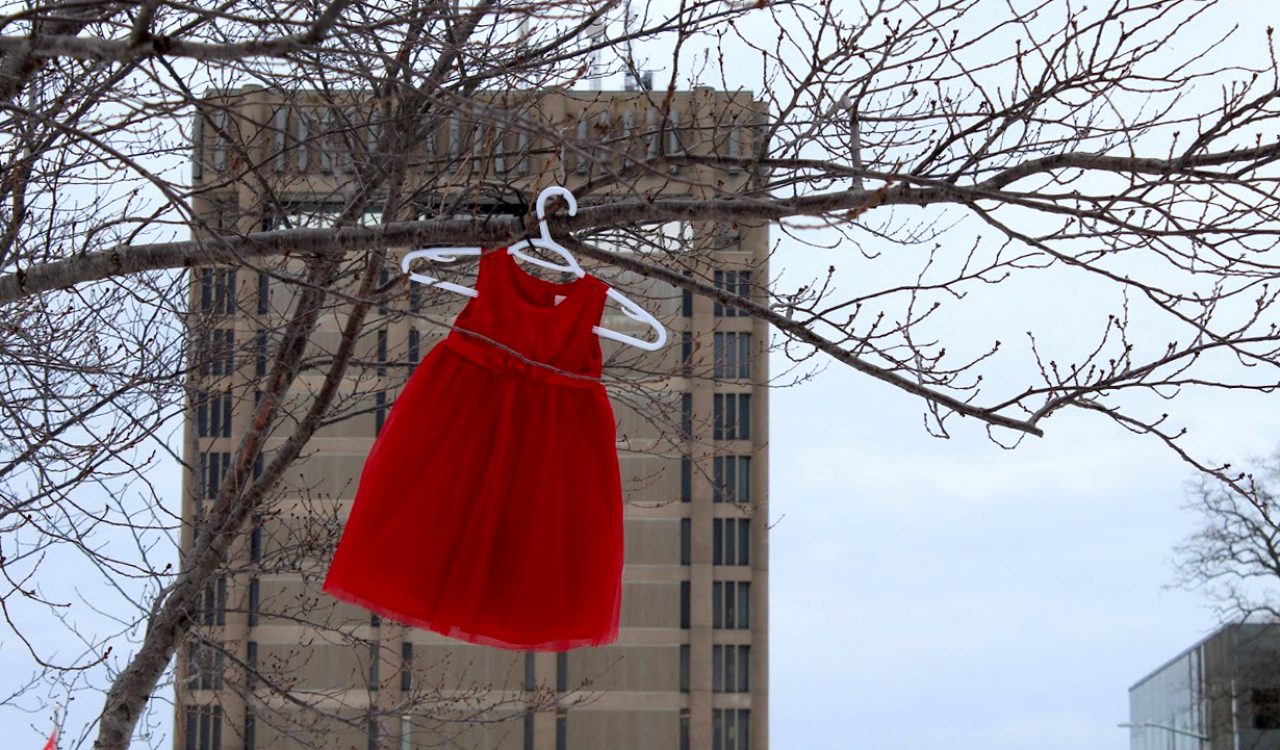 The annual REDress project raising awareness about missing and murdered Indigenous women, girls, and 2SLGTBQQIA (Two-Sprit, Lesbian, Gay, Trans, Bisexual, Queer, Questioning, Intersex and Asexual) people is going virtual this year with a week of online events from February 8th to 12th, organized through a collaboration between Brock University and Niagara College.

This year, Brock University has partnered with Niagara College to offer a series of virtual events organized around ReDress and MMIWG2S+.

While we are unable to hang dresses at Brock this year due to COVID 19 provisions, we are lending our red dress collection to Niagara College who is able to hang them on campus. We also want to encourage people to hang a red dress where they are (for example, in a window or outside) for the week. We also invite folks to take a picture of their red dress and submit to REDressBrock@gmail.com to be part of a virtual REDress exhibit.

To launch REDress week, we are centering the stories of families of MMIWG. Community member Linda John will be sharing her family’s experiences.

Linda John is a Haundenosaunee, Mohawk Nation Woman of the Turtle Clan, from Six Nations. A mother of five, she raises four of her grandchildren whom are the “Children Of” MMIW(Missing and Murdered Indigenous Women). Linda is a strong advocate for MMIW, MMIWG, MMIM, MMIMB, MMIWLGBTQ2S, who has had many positive impacts on our indigenous woman, then and now. Linda continues to promote healing and over all Indigenous well-being by embracing our Stolen Sisters with Prayer and Love.

To register for this event, please go to: https://www.eventbrite.ca/e/redress-families-of-murdered-missing-indigenous-women-and-girls-mmiwg-tickets-140294621991

This session highlights the experiences of 2SLGTBQQIA+ and features Nenookaasi Ogichidaa

Neno: Nenookaasi Ogichidaa, or “hummingbird warrior” in Ojibwe, is a two-spirit powwow dancer who is Black, Ukranian and Ojibwe, a First Nation based in Canada and the U.S.

To register for this event, please go to: https://www.eventbrite.ca/e/redress-2slgbtqqia-and-mmiwg-tickets-140295390289

Brock’s DRC will be hosting author Helen Knott to discuss her memoir In My Own Moccasins: A Memoir of Resilience. The DRC was initiated in 2019 by Dr. Robyn Bourgeois, Acting Vice Provost, Indigenous Engagement to take up the final report of the national inquiry, but has since expanded to include a second monthly sharing circle where participants take up writing and film by Indigenous peoples.

For more information about In My Own Moccasins, please see https://uofrpress.ca/Books/I/In-My-Own-Moccasins

JR LaRose is a 2011 Grey Cup champion. A proud member of One Arrow First Nation, he is an ambassador for Aboriginal peoples. He is an accomplished speaker speaking and facilitating over 400 presentations throughout Canada and the United States since 2008. A proud family man JR’s path to success has been a long and hard fought journey. Growing up in low incoming housing in Edmonton’s inner city didn’t exactly set JR up for success but it did give him the drive to succeed.

Sean Vanderklis is Mississauga from Curve Lake First Nation. However, he was born and raised in Niagara. He is currently the co-host of the radio station One Dish One Mic, a reporter for the Niagara Review and the 2020 Recipient of the Canadian Journalism Foundation CBC Indigenous Journalism Fellowship. He is the former President of the NRNC Board of Directorsand former Board of Directors member for the Ontario Federation of Indigenous Friendship Centres as well as the National Association of Friendship Centres.

Nick Printup: Nick Printup is Onondaga beaver clan from Six Nations of the Grand River and he is also Algonquin from Kitigan Zibi Anishinabeg First Nation.   Nick will be graduate with an Honours degree in Media & Communication from Brock University this spring.

To register this event, please go to: https://www.eventbrite.ca/e/redress-jr-larose-men-masculinity-and-mmiwg-tickets-140296531703

To conclude ReDress week, we are hosting a gala film screening of Nick Printup’s film Our Sisters in Spirit, followed by a discussion with the director. The event will be opened by Fallon Farinacci, a Métis woman who is a survivor of this violence and served as a member of the National Family Advisory Council for the National Inquiry into MMIWG2S+

Nick Printup: Nick Printup is Onondaga beaver clan from Six Nations of the Grand River and he is also Algonquin from Kitigan Zibi Anishinabeg First Nation.   Nick will be graduate with an Honours degree in Media & Communication from Brock University this spring.

To register for this event, please go to: https://www.eventbrite.ca/e/our-sisters-in-spirit-gala-film-screening-tickets-139550682849

BONUS EVENT: ReDress on One Dish, One Mic

On Sunday February 14th  Brock student organizer Kelyn Best and Robyn Bourgeois, Acting Vice-Provost Indigenous Engagement, will be co-hosting the popular AM 610 CKTB radio show One Dish, One Mic with hosts Karl Dockstader and Sean Vanderklis. The entire show will be devoted to the issue of MMIWG2S+.

Thank you to our event supporters and sponsors!

For more about the National Inquiry, please see https://www.mmiwg-ffada.ca

The REDress project, which involves the hanging of red dresses in spaces, began as an art installation by Métis artist Jamie Black on the campus of the University in Winnipeg in 2011 and has since been replicated, with the encouragement of Black in communities across Canada. The empty red dresses are meant to signify the losses of Indigenous women, girls, and 2SLGTBQQIA people to colonial violence. For more information about Jamie Black and the origins of the ReDress, please see https://www.jaimeblackartist.com/exhibitions/

Since 2019, Brock University has hosted an installation of red dresses around campus and a public event raising awareness about missing and murdered Indigenous, organized around February 14th in solidarity with the annual Women’s Memorial March held in Vancouver since 1991. For more information about the Women’s Memorial March, please see https://womensmemorialmarch.wordpress.com/

Indigenous women, girls, and 2SLGBTQ+ persons are not statistics, they are the hearts of communities and Nations and deserve far more support and resources than they have and are receiving in the wake of the Missing and Murdered Women, Girls, and Two-Spirit epidemic and genocide. The MMIWG Report, which was formally released on June 3rd, 2019, works to hold those in power accountable, but also offers insight on Indigenous culture, values, language, and traditions and the importance of preserving and honouring Indigenous spaces and values. The Nations Inquiry’s Final Report, Reclaiming Power and Place, exposes the vast human rights violations that are the foundation for the systemic violence occurring in Canada against Indigenous women, girls, and 2SLGBTQ+ people. The Report calls for transformative justice and shares the truth of family and community members as well as incorporates Calls for Justice directed toward Canada’s government, legal system, social services, and all colonial institutions. What can we do as students, staff, or faculty? As settlers or newcomers on this land? Read more on the report, available for anyone to read and download for free.

We acknowledge the land on which Brock University was built is the traditional territory of the Haudenosaunee and Anishinaabe peoples, many of whom continue to live and work here today. This territory is covered by the Upper Canada Treaties and is within the land protected by the Dish with One Spoon Wampum agreement. Today this gathering place is home to many First Nations, Métis, and Inuit peoples and acknowledging reminds us that our great standard of living is directly related to the resources and friendship of Indigenous people.