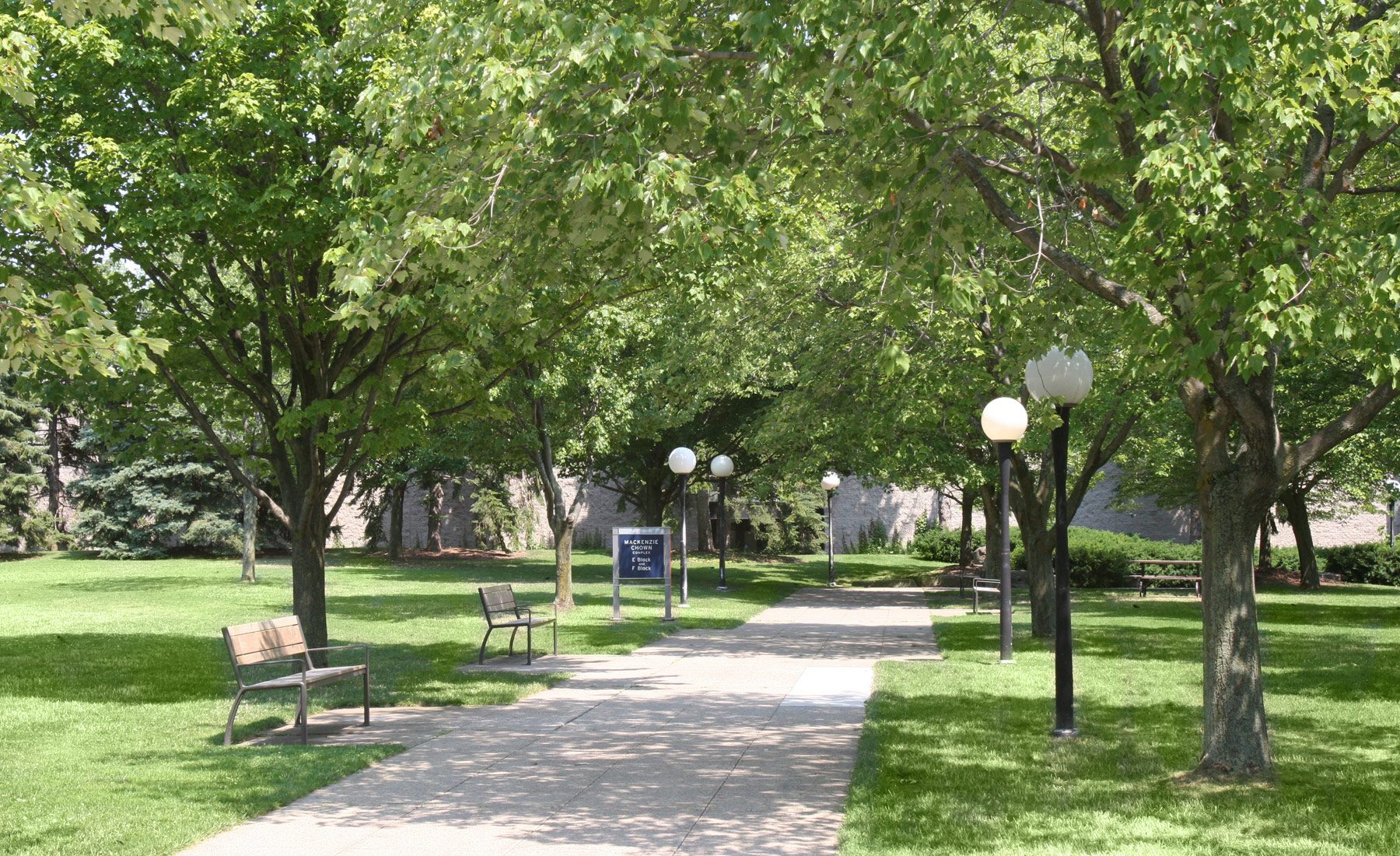 The Brock University Campus includes over 162 hectares (400 acres) of property to be maintained. The natural beauty of the Niagara Escarpment on the north end of the campus is maintained in a natural state. There are several other nodes of natural areas throughout the campus as well. Most of the campus is maintained in a manicured way. There are many interior courtyards, along with the perimeters of the buildings and the sports fields which require intensive maintenance.

The Grounds Crew is made-up of a staff of ten full-time employees which is augmented with Brock students to help maintain the entire grounds of the campus.

Use of the Campus

The campus is used extensively throughout the year, both during the academic year by the students and during the summer by many groups brought to the campus by Conference Services, Recreation Services, The Centre for the Arts, etc. This amount of intensive use creates huge numbers of people on the campus daily and our goal is to provide them with a safe, clean and aesthetically pleasing place to enrich their lives.

In 1856 Thomas Rodman Merritt, the son of the famous canal builder William Hamilton Merritt built a stone house on twenty acres of picturesque land on the edge of downtown St. Catharines. In 1863 the house underwent renovations and a major addition was added. It came to be known as Rodman Hall.

To develop the landscape surrounding the manor, Merritt hired an English gardener by the name of Samuel Richardson. Richardson developed a wonderful garden featuring well kept lawns, exotic trees, fountains, borders and a terraced garden on the hillside leading down to the Twelve Mile Creek. He also built a display green house, an extensive kitchen garden and orchard. The Merritts and Richardson were able to see the garden mature into magnificence over a period of five decades.

By the late 1950’s, the house had become to much too keep for the last Merritt to live in the house. It had been divided into apartments and 12 acres of land had been sold off. Rather than sell the property to developers, the property was acquired by the St. Catharines and District Arts Council and on September 17, 1960 became Rodman Hall Arts Centre. For the next quarter of a century, the garden became smaller as successive gallery additions were developed.

In 1984, Jim Wells, the Executive Director of the John Howard Society, approached Rodman Hall Director Peter Harris with a proposal to use the labour force from the Community Service Programs of the John Howard Society to develop an arboretum on the overgrown embankment adjacent to Rodman Hall.  An Arboretum Committee was formed and a relationship between the John Howard Society and Rodman Hall was established.  Walker Brothers Quarries was approached for their support as a civic minded company.  They agreed to the proposal and gave a very generous donation towards the garden project as part of their 100th  Anniversary Celebration that was matched by a grant from the Ministry of Citizenship and Culture.
Roland Barnsley, landscape consultant and the Arboretum Committee project leader, directed the initial activities. He conceived the general layout of the pathways and was there to oversee their installation. Also a fence, donated and installed by Ontario Hydro, runs along the property line at the bottom of the embankment. The John Howard Society cleared weeds and undesirable plants and spread large quantities of wood chip mulch.

In April of 1987, Darren Schmahl, a recent graduate of the Niagara Parks School of Horticulture, was hired to supervise the initial planting phase of the project. The plants were ordered the previous season by Rudy Behring, a rhododendron hybridizer who donated several of his hybrids to the garden. With an additional donation from the generous Walker family, the hillside was further developed. On June 23, 1988, the garden was officially named The Walker Botanical Garden and opened to the public by Lily Munroe, Minister of Citizenship and Culture, Mayor Joe McCaffery and the Walker family.

Amongst others making significant contributions were the John Howard Society, the Rotary Club of St. Catharines, the Trillium Foundation, Ontario Hydro, the Quebec and Ontario Paper Company, Employment and Immigration Canada and General Motors of Canada and the Government of Ontario.

Much of the planting during this phase of development took advantage of the garden’s microclimate which has enabled many unusual species of plants from around the world to overwinter.  Specimens include Blue Atlas Cedar from North Africa, Cryptomeria and Magnolia from Japan, Dawn Redwood, Dogwood and Blue Fir from China, Parrotia from Asia, Southern Magnolia and Cypress from America’s deep south and Coastal Redwoods from California and Washington.

A variety of financial pressures in the late 1990’s and in the early 2000s placed Rodman Hall and the Walker Botanical Garden in jeopardy.  In September 2003, Brock University took over responsibility for the property with a commitment to continue to operate Rodman Hall as an art gallery.  In recent years volunteers from the Rodman Hall’s Gallery Association, West St. Catharines Community Action Network and the St. Catharines Horticultural Society performed heroic volunteer service in the garden.  As a result of their initiative, a Walker Botanical Garden Steering Committee was struck in the fall of 2005 to address long term maintenance issues, financial concerns and a twenty year master plan.

In response to the committee’s work, Brock University has committed itself to the management and the revival of the grounds of Rodman Hall through the addition of new staff positions in its department of Facilities Management.  Brock has also developed a working relationship with Niagara College to employee its Horticultural Co-op students in the garden.  All of the members of the WGB Steering committee are excited to report that the spring of 2006 will see the beginnings of a revival of the Walker Botanical Garden. Darren Schmahl with contributions from Gordon Hatt, April 2006