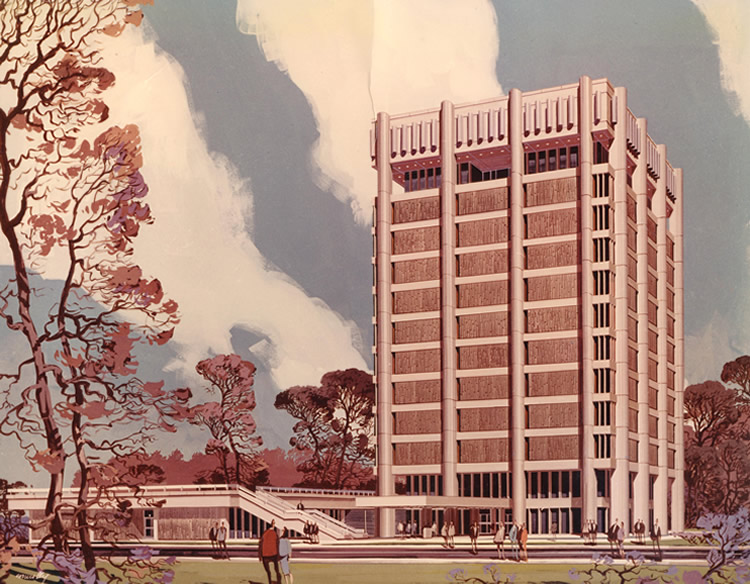 As early as 1797, John Graves Simcoe, Lieutenant-Governor of Upper Canada proposed “a college of the higher sort” for Niagara-on-the-Lake which was then the capital of Upper Canada. However, the idea lapsed with the removal of the capital to Toronto. William Lyon MacKenzie had also advocated for a university in the Niagara region in the 1820’s.

It wasn’t until the 1950’s and 1960’s, with the expansion of the provincial university system in Ontario that the idea of a Niagara university began to capture the public imagination. Strong community and local political support eventually led to the establishment of a Founders Committee in 1962. Although the Founders Committee worked closely with the Provincial Advisory Committee on University Affairs, retaining staff and planning, it wasn’t until March 25, 1964 that Bill PR10 “An Act to Incorporate Brock University” was passed by the provincial parliament.

The site selection process reviewed 29 community proposals and seriously examined 5 potential sites, eventually selecting the “Decew Falls site” at the top of the Niagara escarpment on the southern boundary of the city of St. Catharines.

September 1964 saw the first assembly of faculty and students temporarily housed in the St. Paul Street United Church in downtown St. Catharines . In November of that same year classes moved to the “Glenridge Campus” which was a converted industrial facility located on Brock property at the bottom of the escarpment. That facility remained in use until it was replaced by the new Science Complex, and was sold and developed for residential use in 1984.

In 1963 and 1964 UPACE, a consortium of architects, engineers and planners were retained to develop a master plan for the new university. In June 1965 a groundbreaking ceremony was held on the Decew Campus and construction of Brock University officially began as we now know it. The Schmon Tower was the first building constructed on the campus and it was occupied in stages from the fall of 1966 to the summer of 1967.

The master plan called for a network of underground service tunnels which were constructed in conjunction with the Schmon Tower . Originally the university was an all electric powered campus, but in 1994 a natural gas powered co-generation facility was constructed providing heating, cooling and the generation of electricity for the entire campus.

After completion of the Schmon Tower , the period 1966 to 1973 saw the rapid development of the main Decew campus including the completion of the Thistle Complex, Robert S.K. Welch Hall (formerly the St. Catharines Teacher’s College), Decew Residence, the University Club, the MacKenzie Chown Complex, and phase 1 of the Physical Education Centre.

The pace of development then slowed considerably. At the end the 1970’s the second phase of the Physical Education Centre (the Aquatic Centre) was completed, and the only significant academic development of the 1980’s was H-Block (the Science Complex) completed in 1983.

The 1990’s was a period of incremental development. In 1990 the Alumni Student Centre and Taro Hall were completed, followed by J-Block in 1993. The Village Residence was constructed in three phases from 1988 to 1999, and the Vallee Residence was built in 1995. The decade ended with the completion of Inniskillin Hall in 1999.

The expansion of the University

The new century brings the most significant expansion of the university since its development. Recent new residence construction includes the Alan Earp Residence, the Arnie Lowenberger Residence and dining hall, and the Quarry View Residence. The Brock 2000 project, consisting of a Student/Community Health and Fitness Centre, two academic buildings, renovations to the Physical Education Centre and Welch Hall was completed in 2002. Other major construction includes the addition to D Block of the MacKenzie Chown Complex, and a major expansion of the parking lot system in 2003. A new campus store/academic building and a social sciences research building complex was complete during the summer 2007 located east of the Student’s – Alumni Centre.

See a photographic history of the campus construction.