Congratulations to the Spring Class of 2021! 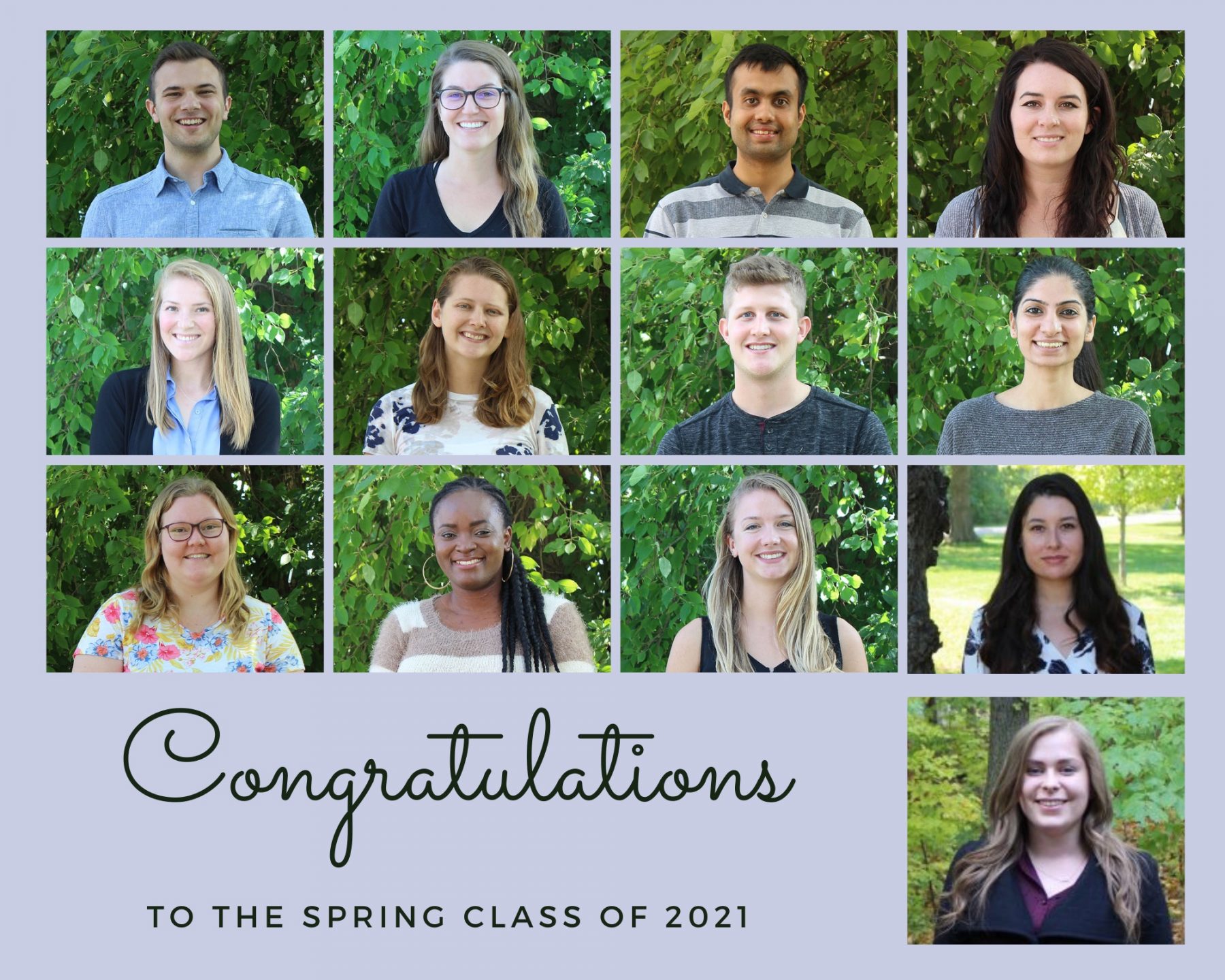 While public health guidelines continue to prevent us from celebrating in person, convocation remains one of the most exciting times for the Brock community, including the ESRC. We are particularly excited this spring, as the ESRC celebrates the largest graduating class of Master of Sustainability students to date!

On June 18th, 2021, 13 of our students will receive their Master of Sustainability (MS) degrees and move on to the next phase of their careers, whether it be the pursuit of another degree, or beginning a new job in the field. We are incredibly proud of these students, and it’s been an honour to be a part of their academic journeys!

Nic Bruno joined the program in 2019. His previous degree in Political Science from the University of Toronto – Mississauga provided a solid foundation for his major research paper (MRP). The MRP, titled “Sustainable municipal policy, green transportation, climate adaptation and climate resiliency of built and natural environments” was supervised by Dr. Jessica Blythe. In addition to this research, Nic also completed a co-op placement with Dr. Diane Dupont at Brock University as a flood aversion research assistant.

Abbey Faris joined the program in 2019 after graduating from Brock University with a Major in Public Health and a Minor in Environmental Sustainability. Her educational background played a significant role in her MRP, titled “Impact of the built environment on human health” and supervised by Dr. Jessica Blythe. Abbey secured a co-op position working as an assistant logistics coordinator for NASCAR.

Pulkit Garg travelled to St. Catharines from Allahabad, India to join the program in 2019. His research was supervised by Dr. Liette Vasseur and examined opportunities for adaptation to climate change in the agricultural system in Lincoln, Ontario. Pulkit’s research proposal earned him a FOSS Student Research Award and in December 2020, he presented his completed research project at the FOSS Research Colloquium. Pulkit also presented his research at the International Conference on Sustainable Development held virtually in New York City in September of 2020. In addition to his research, Pulkit completed a co-op position as a project manager with Royal Bank of Canada and was later offered a full-time position.

Sam Gauthier joined the program in 2019 after graduating from Nipissing University with a degree in Biology and a certificate in Forest Resource Management and Conservation. Her research was supervised by Dr. Liette Vasseur and looked at how climate change affects conservation and biodiversity. Sam secured an exciting co-op position and worked as a student inspector with Canada’s Food Inspection Agency. She is now working full time for the Ministry of Transportation as an Environmental Planning Assistant.

Erica Harper graduated from St. Francis Xavier University with a Bachelor’s in Business Administration in Marketing, making her research interests compatible with those of Dr. Todd Green. Dr. Green supervised Erica’s MRP, titled “Corporate social responsibility and consumer behaviour”. Erica’s co-op position was with the ESRC, where she worked as a communications assistant in Spring/Summer 2020. Erica is currently working as a research assistant in the ESRC, and we are thrilled that she has chosen to be a member of our team!

Michaela Jennings has a Bachelor of Arts and Humanities in International Development Studies from Trent University, and brought this knowledge to the Sustainability Science and Society (SSAS) program in 2019. Michaela’s research in environmental education and community development was supervised by Dr. Xavier Fazio. Michaela completed her co-op placement as a research assistant in the Cool Climate Oenology Viticulture Institute at Brock University, and later worked with Dr. Jessica Blythe as a research assistant with the ESRC’s Niagara Adapts partnership.

Nolan Kelly joined the SSAS program in 2019 after graduating from Brock University where he majored in Sport Management and completed a Minor in Environmental Sustainability. Nolan’s interest in sports influenced his MRP, which was supervised by Dr. Jessica Blythe and titled “The impact of sports on the environment and how sports can make the transition to become environmentally sustainable”. Nolan completed his co-op position as a sales and marketing account manager with LightenCo and worked with fellow graduate Erica Harper as a research assistant with Amanda Smits in the ESRC’s Charter with Facilities Management partnership.

Bani Maini travelled to St. Catharines from Rajasthan, India to join the SSAS program in 2019. Bani completed an independent research study about Marine OECMs that was supervised by Dr. Jessica Blythe. This independent research project influenced Bani’s final Major Research Paper, titled “Advancing marine conservation through other effective area-based conservation measures”. Bani also secured a co-op placement as the climate change coordinator with the Town of Pelham, and is currently working full-time in this role.

Shelby McFadden joined the program after completing a Bachelor of Arts and Science degree at Trent University. Shelby worked with Dr. Ryan Plummer, who supervised Shelby’s MRP titled “Influential factors and interventions to increase recycling behaviours: a program evaluation of the Niagara Region’s residential curbside recycling program”. Shelby worked as a research assistant with the ESRC’s Charter with Facilities Management partnership and completed a co-op placement as a special projects assistant with Brock University.

Doren Otung joined the SSAS Program in 2019 and travelled from Nigeria to begin her studies. Doren joined the Water Resilience Lab under the supervision of Dr. Julia Baird. Dr. Baird supervised Doren’s MRP titled “Can farmer networks foster a resilient agriculture?”. In addition to her research, Doren completed a co-op position as a technical content developer for the Faculty of Social Science at Brock University and worked as a research assistant with Dr. Baird in the ESRC’s partnership for Freshwater Resilience.

April Sorenson travelled from Reno, Nevada to join the SSAS program in 2019. April’s Bachelor of Science degree in Landscape Architecture from Colorado State University influenced many aspects of her research work in the SSAS program. Her research, supervised by Dr. Marilyne Jollineau was titled “What are the qualities of a sustainable city? An analysis of current sustainable urban scale rating systems”, and she completed her co-op placement as an urban forestry and green infrastructure intern with the City of Reno. April also worked as a research assistant with Dr. Jollineau in the ESRC’s Brock-Lincoln Living Lab partnership.

Samantha Witkowski joined the SSAS program in 2018 after earning an Honours Bachelor of Arts degree in Environmental Studies from Laurentian University. Her research interests aligned with those of Dr. Ryan Plummer, who supervised Samantha’s thesis research. Samantha successfully defended her thesis, titled “An examination of stakeholder perceptions in conventional and participatory monitoring and evaluation of environmental management” on November 24th, 2020, and we are happy that Samantha is currently working as a research assistant with the ESRC.

Jessica Zugic joined the SSAS program in 2018 after graduating from Brock University’s Concurrent Education program with a Bachelor of Science in Biology. Jessica’s undergraduate and graduate thesis research was supervised by Dr. Michael Pisaric. Jessica presented her research at several conferences throughout her time in the SSAS program, with her most recent presentation taking place virtually at the European Geosciences Union General Assembly on April 27th, 2021. She successfully defended her thesis, titled “Assessing the impacts of variable retention harvesting (VRH) and climate change on carbon sequestration and growth in a red pine (Pinus resinosa) plantation, southern Ontario, Canada” on April 12th, 2021. Jessica was also named as the recipient of the Distinguished Graduate Student Award-Sustainability. This award is given to the student who achieves the highest average in their program.

In addition to these 13 SSAS graduates, we would also like to extend our sincere congratulations to the 17 undergraduate students who will be graduating with a Minor in Environmental Sustainability. We are incredibly proud of these students and look forward to seeing where they go and what they do next!

We created a special video message for our graduates from their supervisors, Graduate Program Director, and ESRC Director. You can watch this message on our Youtube channel here.