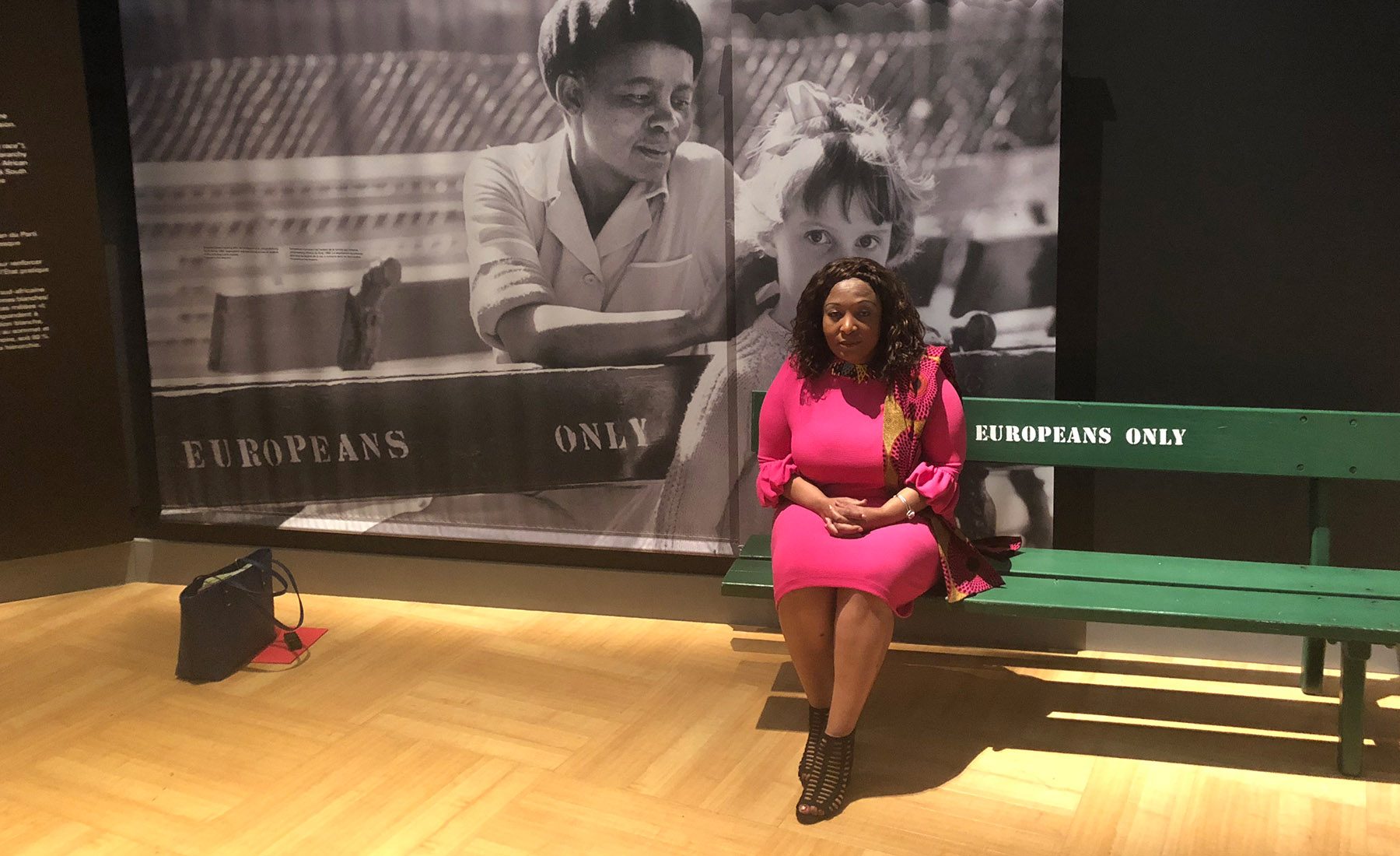 Her mother was a teacher and her father a doctor. In other places at other times, their careers would have provided a comfortable life for their children. In Apartheid-era South Africa, their race made them targets of systemic discrimination.

From 1948 to 1994, black South Africans, along with people of other races, were oppressed by a series of laws privileging white South Africans.

Mogadime, an associate professor in Brock’s Faculty of Education, recently shared some of her family’s experience at the opening of Mandela: Struggle for Freedom at the Canadian Museum for Human Rights (CMHR) in Winnipeg. The exhibition explores the fight against Apartheid, from the legacy of Nelson Mandela to the efforts of human rights activists in Canada.

Seeing the exhibition was particularly poignant for Mogadime as it features the contributions of her mother, Caroline Goodie Mogadime, as a human rights defender.

“I felt a tremendous connection to why my parents made Canada their home,” she said after sharing their story during the opening’s keynote address.

“They wanted a better future for their children through education. The impact of the Bantu Education Act of 1953 was one of the push factors that drove their decision to leave South Africa for Botswana in 1961. My mother returned briefly after that to give birth to me during the ’60s in Pretoria, South Africa.”

From Botswana, the family moved first to Zambia and then to Canada in the 1970s.

“My family arrived from Zambia with UN passports as refugees. We immigrated to Canada through the protection of the 1951 UN Convention on the Rights of Refugees. Even if we were all born in South Africa, we were stateless and not citizens of our own country due to Apartheid. ”

“My father was a physician. We’re very fortunate that he was the first class of medical students at the University of Durban that was able to be let in as African people, as a black man,” explained Mogadime.

“We were lucky to be able to come to Canada via the fact that a hospital was looking for someone like him.”

In Canada, her mother worked full time as an Ontario teacher but still made time to volunteer at the African National Congress (ANC) office in Toronto sharing the reality of Apartheid with Canadians. Mogadime learned about what was happening in South Africa through her mother’s talks at local churches and women’s organizations.

As an adult, Mogadime explored her mother’s activism for her master’s research through a series of oral history interviews.

She shared her mother’s story with the CMHR after reading about an oral history project on the anti-Apartheid struggle in Canada.

“I felt the work that women did, and especially African women did, their contributions should also be featured in that oral history,” Mogadime said.

“It does give me so much happiness to see that the role of African women is acknowledged. We were people of agency. We were fighting there along with men to make a difference and to make change,” she said.

Mogadime’s family has a long history of participation in the anti-Apartheid struggle.

Her great-grandfather, Henry Selby Msimang, was one of the founders of the South African Native National Congress, which later became the ANC. He and other African intellectuals at the time challenged the human rights violations of the 1913 Land Act, which gave most of the country’s land to a white minority and forced most of the black population out to ‘Native reserves’ in isolated areas with poor agricultural land.

Mogadime addressed the injustices of the Land Act and the human rights violations committed under Apartheid when she spoke at the exhibition opening.

“I felt the need to speak about the agency African people had in fighting for their rights and that resistance was part of what Nelson Mandela inherited when he himself joined the struggle,” Mogadime explained. “I felt it was important for my talk to honour the presence of these African Intellectuals in the historical memory of the struggle for freedom.”

Mogadime’s grandmother was a teacher and successful entrepreneur, a remarkable feat at the time given her race and sex. Both she and Mogadime’s mother instilled in their families the importance of giving back to the community when one has been fortunate enough to receive an education.

Seeing her mother’s contributions recognized at the exhibit was rewarding for the Brock professor.

“I do think she’s a great role model for young women today, for black women to know there were teachers that were out there years ago doing this kind of human rights work,” Mogadime said.

“Her message is really about the notion of self-empowerment and voice; Not being overtaken by challenges, but actually learning things like having the resilience to think that you can actually act. Do things. Change things.”

Her family’s experience has shaped who Mogadime is today as an individual and an educator.

“I just have a sense that whatever I do, it should be connected to my colleagues somehow,” she says. “I think to some extent the idea that I’m part of a community, and that whatever I do is part of that community. It’s not just myself as an individual.”

Mogadime initiated the institutional agreement between North West University in South Africa and Brock University in 2005 that has been renewed several times. It has enjoyed many successes including graduate student internships and faculty exchanges between the two universities.

She feels the partnership is about Ubuntu and being a community across borders, and expressed thanks to Professor Kobus Mentz of North West University, who worked with her for many years.

Mogadime’s work with the CMHR is ongoing. She has been asked to develop curriculum materials for teachers to use for the exhibition based on an approach she created called Teaching Nelson Mandela, and to provide workshops to school boards in Ontario and other provinces.