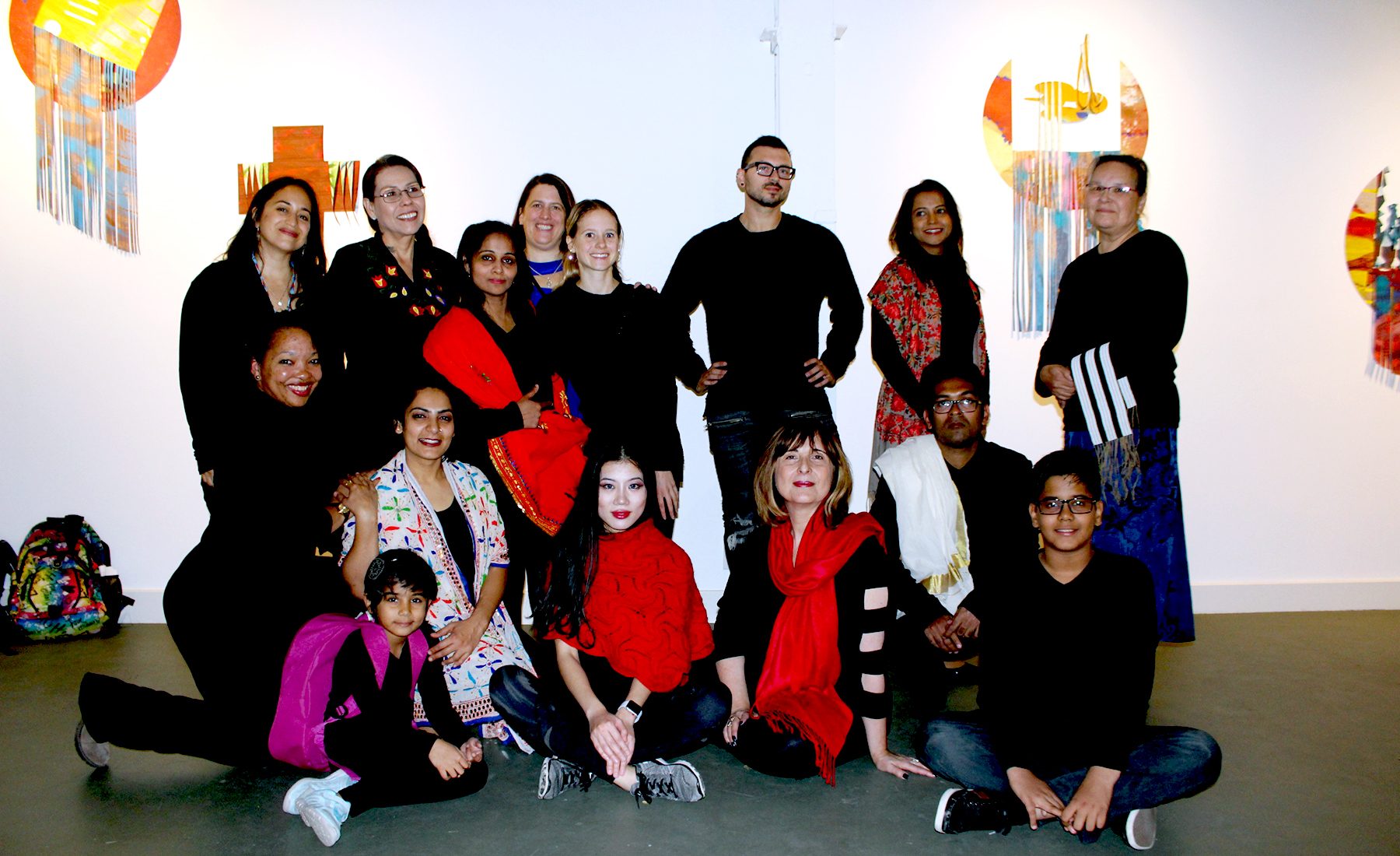 It took nine years for Snezana Ratkovic to feel fully at home in Canada. Having settled here as a refugee from the former Yugoslavia, she understands the challenge of creating a new life in an unfamiliar country.

Ratkovic, now a research officer and instructor in the Faculty of Education, heard similar stories from other refugee women while doing her PhD research.

Wanting to find new ways to share these stories with a larger audience, Ratkovic has worked with colleagues in the Faculty of Education and other performers to create a short play, We Want to Paint on the Walls of the Cave, that was featured in the Festival of Readers in St. Catharines on Nov. 4, 2017. Kari-Lynn Winters, an associate professor in the Faculty, worked with Ratkovic as a collaborative playwright and director.

Named from a poem Ratkovic wrote, the play’s title reflects how the women she interviewed for her research wanted to express their creativity while trying to learn new languages, rebuild careers, and support their families.

This multimedia performance aims to encourage discussion about the roles and experiences of immigrants, refugees, and Indigenous people in Canada. Using a collaborative playbuilding approach, the performers weave their personal experiences and ideas into the final product. The music was composed by Spy Denomme-Welch, an assistant professor in the Faculty of Education, and performers created the painting featured in the performance.

As well as blending dance, music, drama, and visuals, the play also includes interactive elements that allow the audience to participate in the production.

Since it was first performed at the In the Soil Arts Festival in April 2017, the play has been expanded with new content and performers. The Festival of Reader cast included several Brock University faculty members and students from a range of backgrounds.

Dr. Snežana Ratković (Artistic Director/Producer/Dramaturge/Collaborative Playwright) is a refugee teacher from the former Yugoslavia who immigrated to Canada in 1998. She is the Research Officer in the Faculty of Education at Brock University and a published poet in the former Yugoslavia. Snežana’s research interest lies in migration and indigeneity, transnational and transdisciplinary teacher education, social justice leadership, decolonizing research methodologies, and knowledge mobilization.

Dr. Kari-Lynn Winters (Drama Director/Dramaturge/Collaborative Playwright) is an award-winning children’s author, scholar, playwright, and performer. Since 2007, she has had more than 17 books published with 9 more in pre-press production. She is also an Associate Professor at Brock University, where she teaches drama-in-education and language arts to teacher candidates.

Heryka Miranda (Choreographer/Dance Director) is a social change dance artist and activist-scholar. Her dance creations are guided by working with disability arts, Indigenous dance/theatre and expressive arts healing approaches. She has training in Dance/Movement Therapy and Expressive Arts Therapy from the Antioch Graduate School in Keene, New Hampshire, and the International School for Interdisciplinary Studies, ISIS – Canada. Heryka recently graduated at Brock University with an MA in Health and Physical Education from the Faculty of Applied Health Sciences

Dr. Spy Dénommé-Welch (Composer) is a multidisciplinary scholar and artist (composer/librettist/producer). He completed his PhD in Education at York University, where his research received funding from SSHRC and OGS, and garnered the President Susan Mann Dissertation Award. He has an active research and professional arts practice, working as a composer, writer/librettist, performer and producer.

Catherine Magowan (Bassoonist/Composer) has been principal bassoonist with the Sudbury Symphony Orchestra since 2002. She was nominated for a Dora Mavor Moore award in 2010 for the opera Giiwedin, which she co-composed with her collaborator, Spy Dénommé-Welch, and in 2012 their chamber piece, Bike Rage, took first prize by audience vote in Baroque Idol (Aradia Ensemble).

Brianna Spratt (Dramaturge/Stage Manager/Actor) is a multifaceted academic and instructor. She is involved in numerous foundations and committees that focus on health, fitness, and overall well-being. Her background in applied science, education, research, and fitness provides her with a wealth of knowledge in embodiment and in the collaboration of fields and topics.

Sajitha Vinod (Actor/Dancer) is an M.Ed. Graduate, Leadership and Administration in Education, Brock University and a science teacher from United Arab Emirates. She writes poems.

Bharti Rana (Actor/Dancer) is a student in the Leadership and Administration in Education (ISP) program at Brock University and a computer teacher from India. She won second prize in Rangoli competition and participated in cultural group dance.

Shihui Yang (Actor/Dancer) is a diversely talented and experienced individual in the fields of fine art, music, and sport. Yang achieved a BFA in oil painting from CCNU and she is an experienced sketching and drawing instructor. In addition to being an accomplished pianist, Shihui is a recognized National Second-Level Athlete in China. At present, Yang is a student in the Master of Education program at Brock University.

Aji Vatghese (Actor/Dancer) is a Master of Education Student of Brock University. He is a member of a Christian Catholic religious group called Bethany. Being a social worker and teacher, he tries his best to make this world a better place for everyone.

Neelofar Ahmed (Actor) holds an MA, MBA specializing in Human Resources and Marketing and an MS in Computing Sciences from eminent universities in Pakistan. Currently, she works as a researcher at Brock University, Canada. Her interest lies in war and terrorism affected children’s education and physical and mental well-being in schools and communities.

Shaheer Ahmed (Actor) is a Grade 6 student at Oakridge Public School, St. Catherines, Ontario. Shaheer loves to read books and build lego for hours. He loves to talk, cook, and eat. Walking in the woods is his favorite physical activity, besides ice skating.

Aimal Ahmed (Actor) is a Grade 1 student at Jeanne Sauvé French Immersion Public School, St. Catherines, Ontario. She loves to make friends, to laugh, and to dance. Her favorite color is pink and Elsa is her favorite character. Aimal loves to help her friends, make her teachers happy, and make her parents proud.

Vicki Sault (Actor) is Haudenosaunee/Anishnaabi Kwe from Six Nations and Mississauga of the New Credit First Nation. My Anishnaabi name is Waban Nungoos Kwe (Morning Star Woman). She has a Bachelor of Arts Degree in Sociology and a Bachelor of Education in Aboriginal Adult Education who was determined to strive for an education while raising her children in two worlds of Aboriginal culture and non Native society

Shannon Kitchings’ (Poet) arts-based work in community stems from her outreach experience with youth in Ontario. In addition to arts-based community development animator and playwright, Shannon is a spoken word artist, performing her poems throughout southern Ontario. She is also a trainer, director and singer.