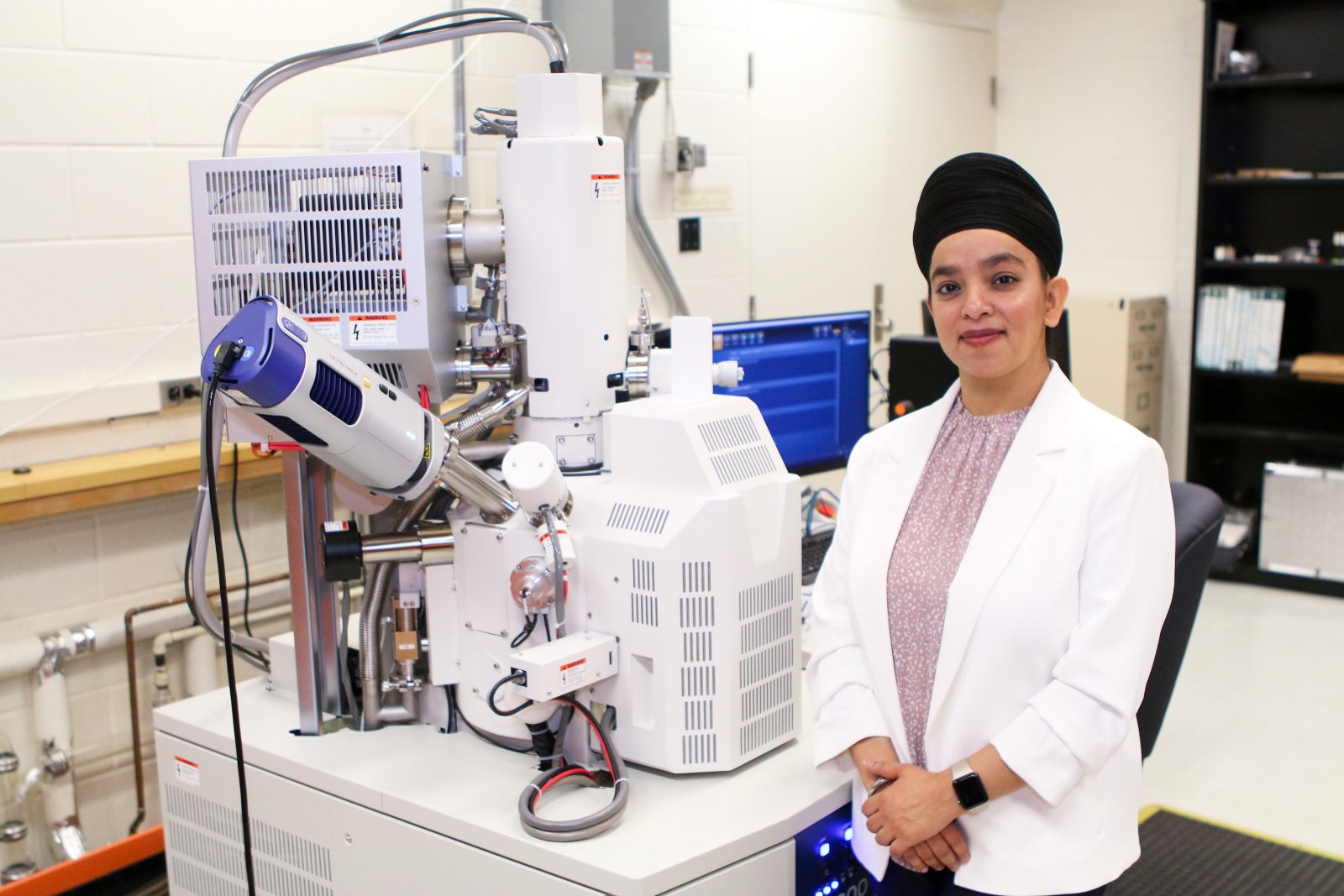 Brock University Assistant Professor of Physics and Engineering Jasneet Kaur stands next to a high-resolution electron microscope she uses to examine the properties of materials.

Note: Faculty Focus is a monthly series that highlights faculty whose compelling passions, innovative ideas and various areas of expertise help weave together the fabric of Brock University’s vibrant community. The full series is available on The Brock News.

Jasneet Kaur joined Brock University’s new Engineering Department 18 months ago, but her excitement to represent women in science and train the next generation of physicists, chemists and engineers stretches back much further.

As a woman of colour and the first person in her family to earn a PhD, Kaur is passionate about inspiring others like her to pursue careers in science, technology, engineering and mathematics (STEM).

“Physics and engineering are male-dominated fields, so I feel a responsibility to women and girls, especially from under-represented groups,” said Kaur, who is an Assistant Professor of Physics cross appointed with Brock’s Department of Physics and the Yousef Haj-Ahmad Department of Engineering.

Growing up in India, Kaur was sometimes hesitant to speak up. But now, as an experienced and successful material scientist and experimental physicist, she encourages women and girls to stay curious, participate in their fields of interest and share their voice.

Through her involvement with various initiatives, such as Ontario Women in Engineering and Mothers in Science, Kaur speaks to groups of women and girls and offers mentorship.

“I tell them to be open-minded and believe in themselves to pursue their passions unapologetically, irrespective of their gender,” she said.

Over the course of her career, Kaur has followed her instinct and designed her own path. Although she has long held an interest in math and science, her passions evolved over time. Her childhood dream of becoming a doctor changed in high school once she realized she enjoyed physics more than biology. She hoped to focus on engineering at the post-secondary level but decided against it when she learned many students in India were following that path. She pursued physics instead, and later incorporated engineering into her research of nanomaterials.

After graduating with a master’s in Physics, Kaur started teaching high school students, which led her to pursue a Bachelor of Education with the intention of teaching long term. But a few years later, she felt a desire to explore and research, so she applied for a PhD in Physics.

During her doctoral studies, Kaur focused on the physical and chemical attributes of a family of materials, known as diluted magnetic semiconductors, and instructed undergraduate physics courses. As a testament to her excellence in research and teaching, she was offered an assistant professor position at the same university.

A year into her work, Kaur once again felt the urge to do more with research. She wanted to move from experimental physics to real-world applications of materials. She left India and spent the next six years as a post-doctoral fellow — three years in Italy exploring the properties and applications of advanced materials, and three years in Toronto, where she broadened her skills in nanoengineering of materials and collaborated with industrial partners and international researchers.

It was Kaur’s experiences working with multidisciplinary applications of nanomaterials that attracted her to Brock’s Integrated Engineering program, which combines traditional engineering fields, such as mechanical, software and electrical, with diverse disciplines, including nanotechnology, bioengineering, artificial intelligence-driven technologies and energy sustainability.

Kaur’s research at Brock focuses on nanomaterials synthesis and their surface engineering for multidisciplinary applications ranging from clean energy to environmental remediation.

“When we say clean energy, we are talking about non fossil fuel-based energy — renewable energy, such as solar and wind, which can be stored and reused in an environmentally friendly fashion without any CO2 emissions,” she said.

“Novel materials are in high demand for improving the efficiency, performance and durability of energy storage devices, such as batteries and supercapacitors,” she said.

Smartwatches and hybrid cars are common examples of products that use these technologies.

Kaur is looking forward to working closely with students through her teaching and in her lab.

“I enjoy when students approach learning and research with a positive attitude and a willingness to contribute new ideas,” she said. “We need more young minds to come up with new strategies and collective action to mitigate the climate crisis, which is happening at a much faster pace than we thought.”