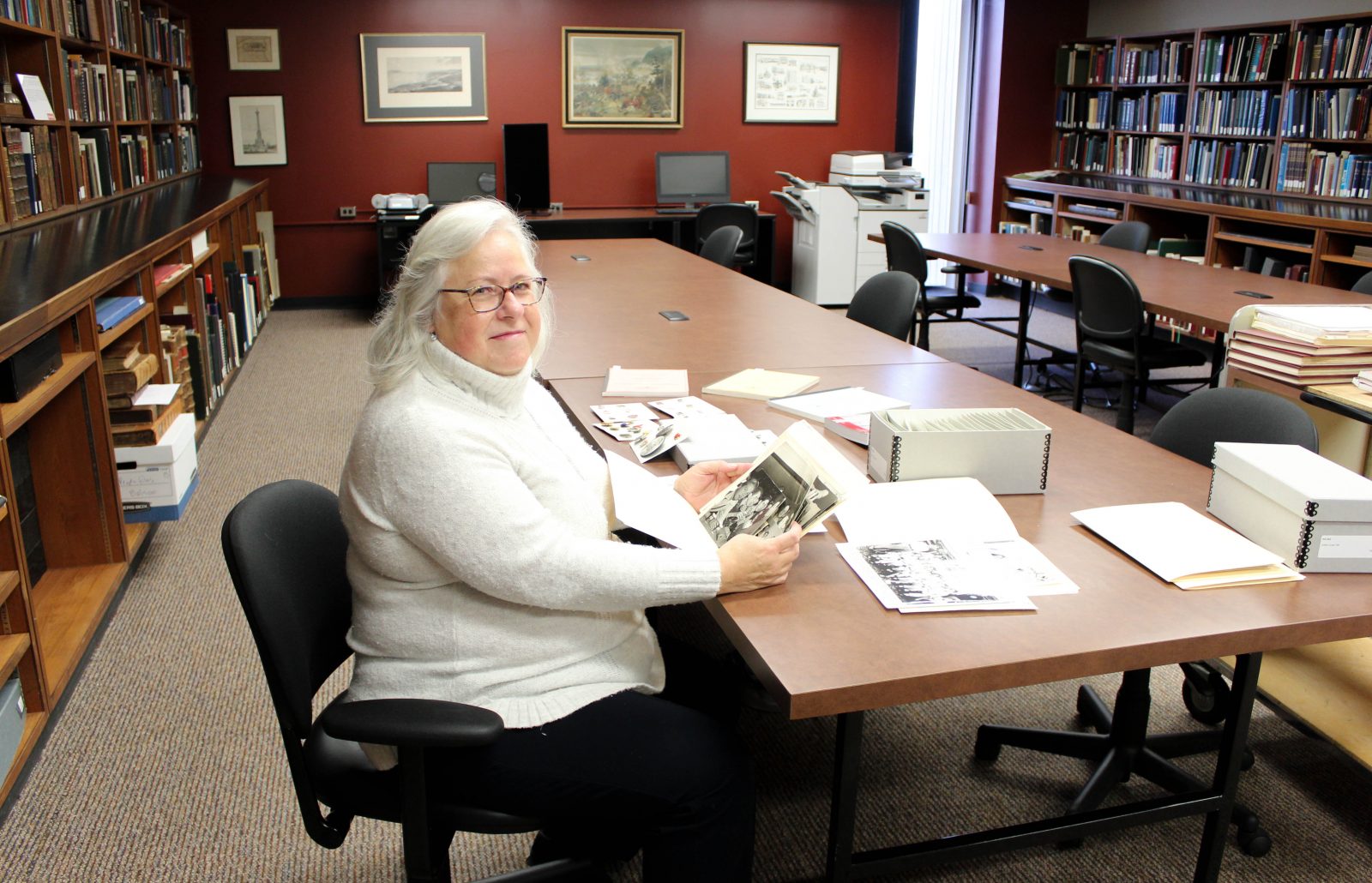 Archives and Special Collections Assistant Edie Williams shows part of the Unifor Local 199 fonds, including bound documents, photographs and enamel pins and buttons. The collection, donated in April 2021, is now available for researchers to access.

A donation of historical materials from Unifor Local 199 to Brock’s Archives and Special Collections is now available for students and researchers to explore in the James A. Gibson Library.

From documents and photographs to hockey jerseys and bumper stickers, the collection offers a multi-faceted look at the history of the organization.

Archives and Special Collections Assistant Edie Williams says that in addition to documenting the inner workings of the organization and its role in the labour movement, the collection also gives testament to the role the union played in shaping the history and day-to-day life of those living in Niagara.

“In addition to the bolstering support for Brock’s creation and ongoing support for United Way, the union was one of the first to move toward equal rights for the LGBTQ community,” she says. “They worked for women’s rights and environmental causes, and had a human rights committee involved with Amnesty International that would write letters on behalf of others to advocate for people in suppressed areas.”

Among the collection are pins and buttons dating back to 1937, including this lenticular button that shows either a portrait of historical United Auto Workers president Walter Reuther or the slogan, “I Did It For Walter.”

Williams adds the union was active in volunteering for disaster relief abroad as well as building community housing in St. Catharines, and hosted dances at its union hall for local teens, sponsored men’s and women’s sports teams, raised money for scholarships and lobbied for health care and reduced transit fees for seniors, among many other community efforts.

Professor Larry Savage in the Department of Labour Studies calls the collection “outstanding” and describes it as “a real treasure trove” for local historians and labour studies researchers.

“The Auto Workers union was at the forefront of struggles to secure the creation of the welfare state, labour protections and redistributive public policies for all working-class people,” he says. “They really moved the yard stick on so many issues that workers today take for granted.”

David Sharron, Head of Special Collections and Archives, says the diversity of the collection is one of its strengths.

“This fonds has everything you want in an archive — correspondence, photos, minute books, published works, scrapbooks, videos, ephemera and so much more — and it spans decades of the history of the Local 199,” he says. “This is a great collection of quality materials for any researcher.”

For Williams, who considers herself a caretaker of the prized items that are donated to the archives, preparing the Unifor Local 99 fonds has been particularly meaningful because of the longstanding relationship between Brock and Unifor Local 199.

“Housing the collection is a great way for Brock to give back to the union, because they gave so much support and worked hard to help fund a local university,” she says. “Now it’s our turn to take care of their memories; it has come full circle.”