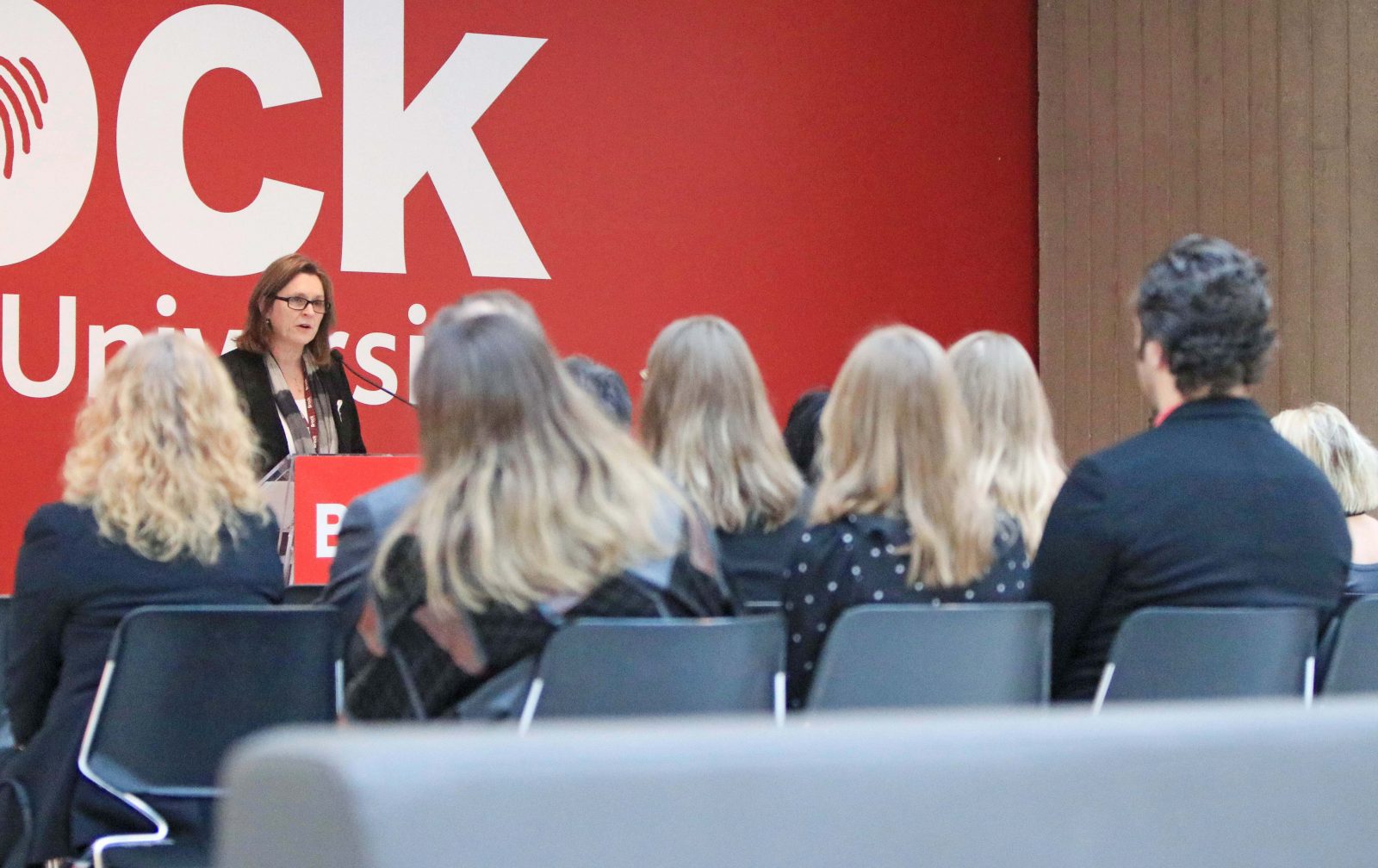 Brock University President and Vice-Chancellor Lesley Rigg speaks at a ceremony held Tuesday, Dec. 6 to mark the National Day of Remembrance and Action on Violence Against Women.

The Brock community came together Tuesday, Dec. 6 to reflect on the National Day of Remembrance and Action on Violence Against Women, highlighting the need for continued commitment towards ending gender-based violence in Canada.

A public ceremony was held in the Rankin Family Pavilion atrium to honour and remember the 14 women lost in the tragic 1989 shooting at Montreal’s École Polytechnique (now called Polytechnique Montreal). The event was part of Brock’s 16 days of activism against gender-based violence, which began Nov. 25 with the International Day for the Elimination of Violence Against Women.

“While we have certainly made advancements in recent years, the truth of the matter is gender-based violence and discrimination continues to be an insidious problem in this country,” Brock President and Vice-Chancellor Lesley Rigg said during her remarks. “Intimate partner violence, sexual harassment, sexual assault, unwanted sexual attention: these are real problems encountered by women and girls in Canada every single day.”

For Indigenous women, members of the 2S&LGBTQ+ community and other vulnerable groups, the issue is even more severe, she said, as these individuals are at even greater risk of experiencing gender-based violence.

“That’s why it continues to be so important not only to gather together today, but also to continue working every single day to create a more equitable and just society; a society in which everyone, regardless of their gender identity, is treated with dignity and respect, and can feel safe going to school to get an education in any discipline they choose,” Rigg said.

Brock has undertaken considerable work in this area, from the ongoing Women in Leadership initiative to student-led events, such as Women in STEM, but there remains much work to be done.

“Initiatives like these need our support to reach even more people and change attitudes and perceptions, in what unfortunately continues to be an ongoing struggle,” Rigg said. “That’s why today, and every day, we remember those lost at École Polytechnique, and commit to ending gender-based violence and discrimination once and for all.”

Also held on Tuesday, as part of the National Day of Remembrance and Action on Violence Against Women, was a panel discussion reflecting on five years of the #MeToo movement.