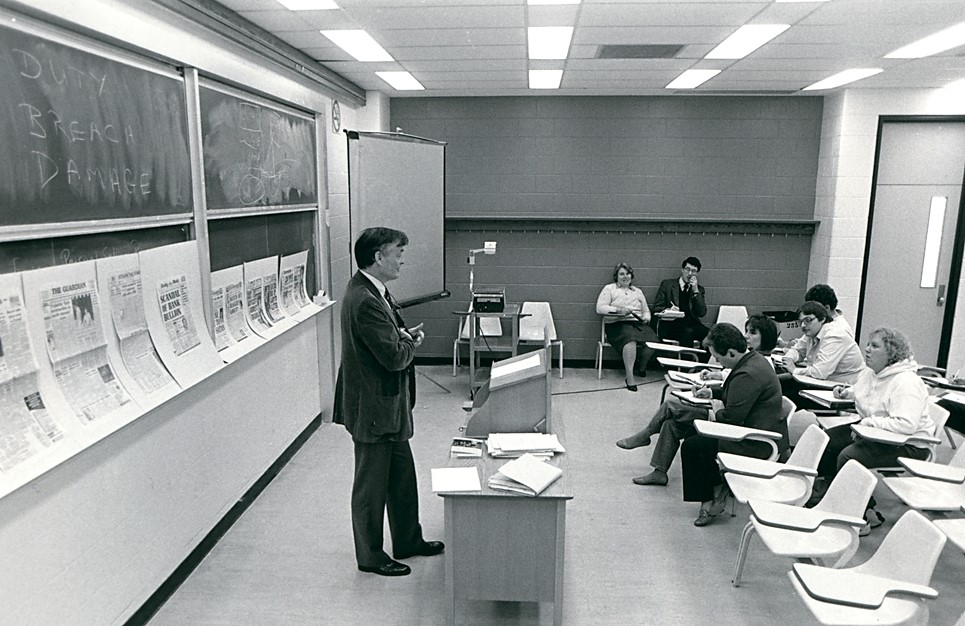 Brock University is mourning the death of Professor Emeritus William “Bill” Henry Nelles Hull of the Department of Political Science, who passed away Wednesday, Nov. 2 at the age of 93.

Hull was a well-respected political scientist who was admired by many.

“Professor Hull was an accomplished scholar, dedicated teacher and generous colleague,” said Ingrid Makus, Dean of the Faculty of Social Sciences, who met Hull when she first joined Brock in 1994. “As a founding Chair of the Department of Political Science, he was widely respected for setting the tone of civility and excellence that continues to resonate in the department and influence students and colleagues in the larger community.”

Paul Hamilton, Associate Professor of Political Science, was a student of Hull’s and worked for him as a teaching assistant from 1989 to 1990. Hamilton remembers first meeting Hull in 1988 in a third-year class on the politics of mass media.

“Dr. Hull was very kind, witty, thoughtful and cared deeply about teaching,” said Hamilton. “He was one of a number of professors who inspired me to go to graduate school. Working for him was a great experience. I’ll never forget his kindness to me.”

Over the past decade, Hull has donated several historical documents and records chronicling the lives of his family to the Brock University Library Archives and Special Collections. The Nelles family dates back to the Niagara area when the United Empire Loyalists came from the United States to settle after the American Revolution in 1783.

Hull was a long-time member and volunteer at St. George’s Anglican Church in St. Catharines and was awarded the Order of Niagara in 2016 in recognition of his service. Additional highlights of Hull’s life are included in his obituary.

In lieu of flowers, Hull’s family requests that he be remembered through donations to St. George’s Anglican Church or the William H.N. Hull Scholarship in Politics Badger Award. To donate to the scholarship, visit brocku.ca/donate and select ‘Make this donation in honour or in memory of an individual.’ Select ‘In Memory’ and write the honoree’s name as ‘Bill Hull.’

Brock University’s flags will be lowered to half-mast Thursday, Nov. 10 in remembrance of Hull and his service to the University.