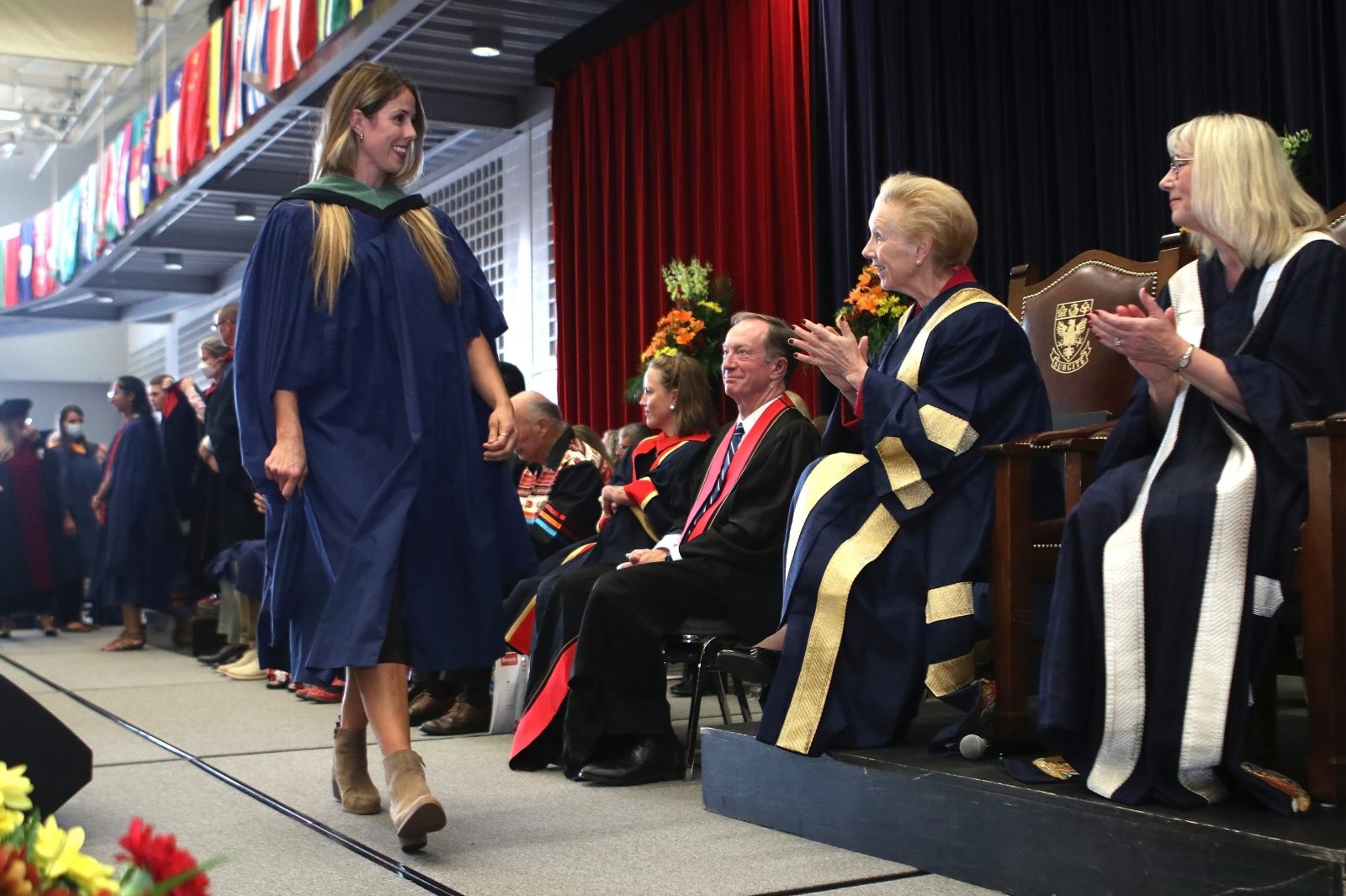 While working as an emergency room nurse, training clients as a personal trainer and rowing for the Brock varsity team, Sarah Slattery still found the time to earn her master’s degree.

Slattery’s busy days begin before the sun rises. Her morning routine begins at 5:30 a.m., when, with a coffee in hand, she writes the day’s to-do list, which typically includes tasks such as work goals, meal preparation or laundry.

On Friday, Oct. 14, Slattery had a unique item on her list: receive a Master of Professional Kinesiology degree during Brock University’s 112th Convocation.

Slattery was one of more than 1,000 graduates who crossed the stage at Ian Beddis Gymnasium Friday. The moment encapsulated all the hard work she put in to achieve the honour.

“Obtaining my master’s degree has been rewarding because I was able to complete it while working full time,” Slattery said. “I’ve achieved different certificates in the past, but I always wanted higher education in the field of fitness.”

In her time at Brock, which began during the COVID-19 pandemic, it wasn’t unusual for the St. Catharines native to work and attend class 12 hours a day, seven days a week.

A registered nurse since 2015, Slattery completed her graduate studies while working at Niagara Health sites and at Dr. Peter Fritz Periodontal Wellness and Implant Surgery in Fonthill. She’s also a personal trainer with Exercise for Cancer to Enhance Living Well (EXCEL) and White Oaks Resort and Spa in Niagara-on-the-Lake.

Despite having an already packed schedule, Slattery was recruited by the Brock Badgers rowing program — a sport she hadn’t competed in since high school — after coaches saw the results of her ergometer times.

Six years before she attended Brock, Slattery was a student-athlete at what is now Toronto Metropolitan University, where she served as captain of the women’s soccer team while earning her Bachelor of Science in Nursing.

In spite of her own athletic success, Slattery’s passion is rooted in training high-risk individuals, such as those managing chronic diseases.

“Training high-risk populations is the most rewarding area of fitness,” she said. “They need guidance more than anyone in how to move their bodies and the benefits they experience from exercise cannot be ignored.”

She added that training someone with an end-stage disease is meant to improve their quality of life.

“It’s so their last days, weeks or months on earth are as independent and empowering as possible,” Slattery said. “There’s a strong contrast when I see healthy people who don’t exercise their bodies and when I train people with end-stage cancer who can’t wait to pump some serious iron.”

Though she’s often the one inspiring those she works with to push a little bit harder, Slattery points to her mother, Kim Hague, as being the greatest influence on who she is as a person, and a nurse.

“My mom is an exceptional human being and I strive to be half the woman she is,” she said. “She went to nursing school when she had two small children to pursue a career where she could directly help people as much as possible, which I think is pretty amazing.”

With her degree finished, Slattery now looks forward to evolving as a nurse and a personal trainer. Most recently, she became a professor at Niagara College in the Health and Fitness Promotion program, where she hopes to inspire students to also pursue a career in the chronic disease sector.