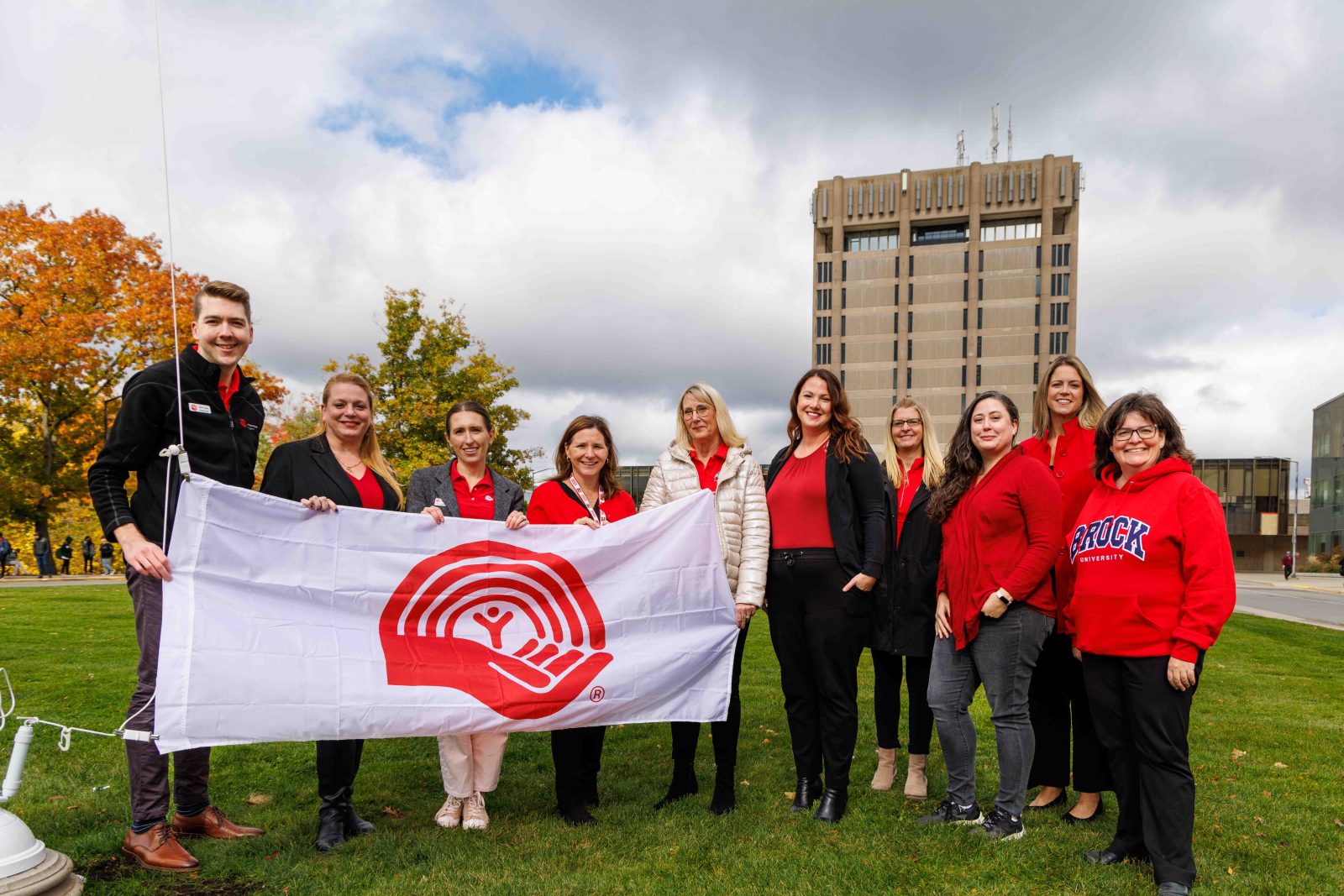 The annual employee workplace fundraising campaign kicked off Wednesday, Oct. 19 with a ceremonial flag raising and aims to raise $160,000 — enough to help about 3,200 individuals locally.

“As we work together towards the University’s strategic priority of enhancing the life and vitality of our local region, it’s important that we take action to address social issues that impact the well-being of our community,” said interim President and Vice-Chancellor Lynn Wells in a campaign launch video.

Poverty affects 14.5 per cent of Niagara’s population, and one in five local children are living below the poverty line. One in four families across the region are at risk of homelessness.

Jocelyn Titone (BBA ’07), Communications Specialist and Brock’s United Way Campaign Staff Co-Chair, experienced food insecurity when she was a child and said it is one of several reasons why she continues to give to United Way.

“My mother came home one day with a box of canned goods from the local food bank. She had to choose between groceries and bills, so she sought help,” said Titone.

“Anyone can find themselves on hard times and I think it’s important we offer support by any means we can,” she said. “We’re all feeling the effects of inflation right now, but imagine what it’s like for someone who is living in poverty or experiencing a crisis.”

Faculty and staff can support the campaign by giving a one-time donation or an ongoing payroll contribution through Workday. Contributions can be designated to a United Way in any city or community in Canada, or to a registered charity of the donor’s choice.

The impact of employee contributions will be increased through matching programs:

This year’s campaign sees the return of more in-person activities, including the annual Souper Star Lunch presented by Aramark on Wednesday, Nov. 9 from 11:30 a.m. to 1 p.m. in Market Hall. Employees will sample and judge seven soups served by Faculty Deans before voting on the winner of the coveted Souper Bowl trophy. Tickets are $10 each and can be purchased on University Tickets. The event is sponsored by Aramark and all proceeds will go to United Way.

“It’s important we continue to demonstrate our collective leadership and dedication to the local community,” said Colleen Whyte (BRLS ’97), Associate Professor with the Recreation and Leisure Department and Brock’s United Way Campaign Faculty Co-Chair. “If everyone at Brock gave what they could, even a small amount, it would add up to a huge impact for our neighbours in need of support. As United Way’s tagline says this year, better is possible.”

Every donation makes a difference:

Questions can be directed to Whyte at cwhyte@brocku.ca or Titone at jtitone@brocku.ca. To volunteer with Brock’s United Way Committee as a department canvasser, email Michelle Leone (BRLS ’05, MA ’08) at mleone@brocku.ca