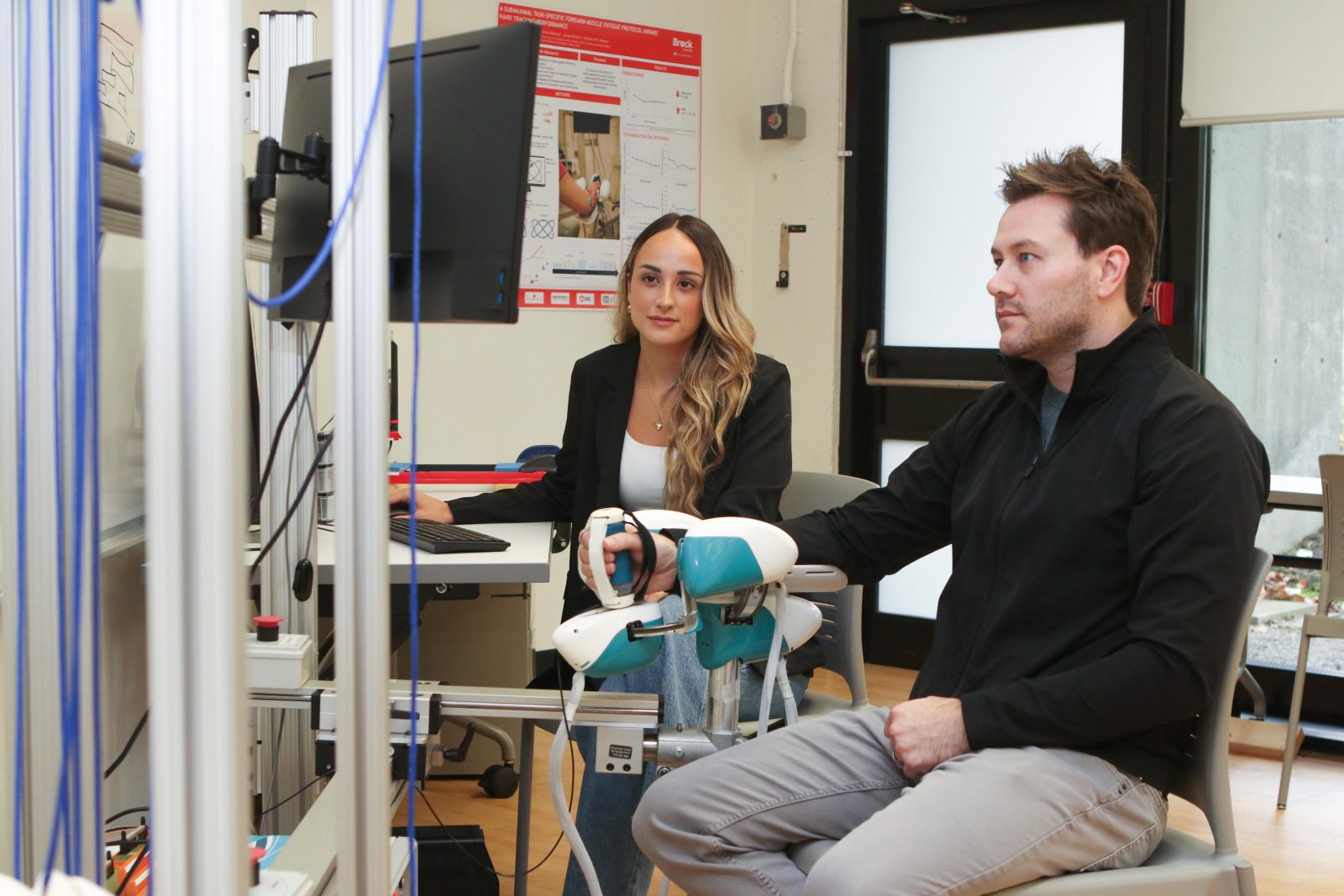 Brock PhD student Kailynn Mannella (left) and her supervisor, Associate Professor of Kinesiology Michael Holmes, demonstrate the 'Wristbot' technology they are using to study how the device can strengthen the arms and wrists of people living with multiple sclerosis.

Can a humble-looking robot that resembles a joystick increase hand function and strength in people living with multiple sclerosis (MS)?

Kailynn Mannella is taking the next step to find out. Two years ago, the then-master’s student was halfway through training a group of 15 people living with MS to use a device called a ‘Wristbot’ when COVID ground the world to a halt.

Early results were encouraging, enough for a ‘proof of concept’ that her and her supervisor, Associate Professor of Kinesiology Michael Holmes, presented to the Multiple Sclerosis Society of Canada.

The Society subsequently awarded the team – headed by Holmes, who is the Canada Research Chair in Neuromuscular Mechanics and Ergonomics and involving researchers at Memorial University, University of Saskatchewan and the Italian Institute of Technology – a two-year Catalyst Research Grant to pick up where they left off.

In this latest study, Mannella and her colleagues are seeking at least 30 research participants living with all types of MS with “some function of their hand or wrist” in at least one limb. Also needed are a similar-sized group of people who don’t have MS for comparison purposes.

Participants need to be able to get to the lab at Brock University multiple times per week. Once on campus, the research team will provide complimentary parking and compensate participants for their time in the study.

“Two years ago, I received overwhelming support from the MS community,” says Mannella, who is now a PhD student in Health Biosciences.

“I just am very grateful to have this grant, which is going to advance research for patients with MS,” she says. “I’m really excited to get this work started.”

At the centre of the research is the Wristbot, a made-to-order haptic device used to study arm and wrist biomechanics and motor control. Housed in Brock University’s Neuromechanics and Ergonomics Lab, the equipment is the only one of its kind in a Canadian university.

In Mannella’s earlier study, when participants grasped the joystick, the machine alternated between helping them to manipulate the stick and providing resistance so that moving the stick was more difficult.

The robot used real-time feedback of the participants’ performance on a hand-tracing task to alter the muscular demands placed on the user, effectively delivering an individualized protocol to maximize performance and adaptation.

Besides expanding the research base to verify earlier results, the team is exploring whether the Wristbot can be used to bring about a phenomenon called ‘cross-education.’

“MS is a bilateral disease but there is often a more affected limb,” explains Holmes. “Manual therapy and exercise for the limb that is more spastic or weak can be challenging to rehabilitate.”

He says that in addition to rehabilitating the stronger limb, the researchers hope their approach can strengthen and increase skill in the weaker (untrained) limb by stimulating neural pathways in the spinal cord and brain, known as cross-education (CE).

“Very little research has focused on the neurophysiology of CE in MS and thus the site of neural adaptation is not known,” says Holmes. “We believe that a deeper investigation into CE using robotics could revolutionize MS therapy.”

The team’s research has three goals: develop an adaptive robotic training program for the hand and wrist; fully understand the adaptations of CE in people living with MS; and link objective data from the robot to participants’ subjective assessments of how they think Wristbot therapy is or isn’t helping them.

The team is aiming to start the research early next year.