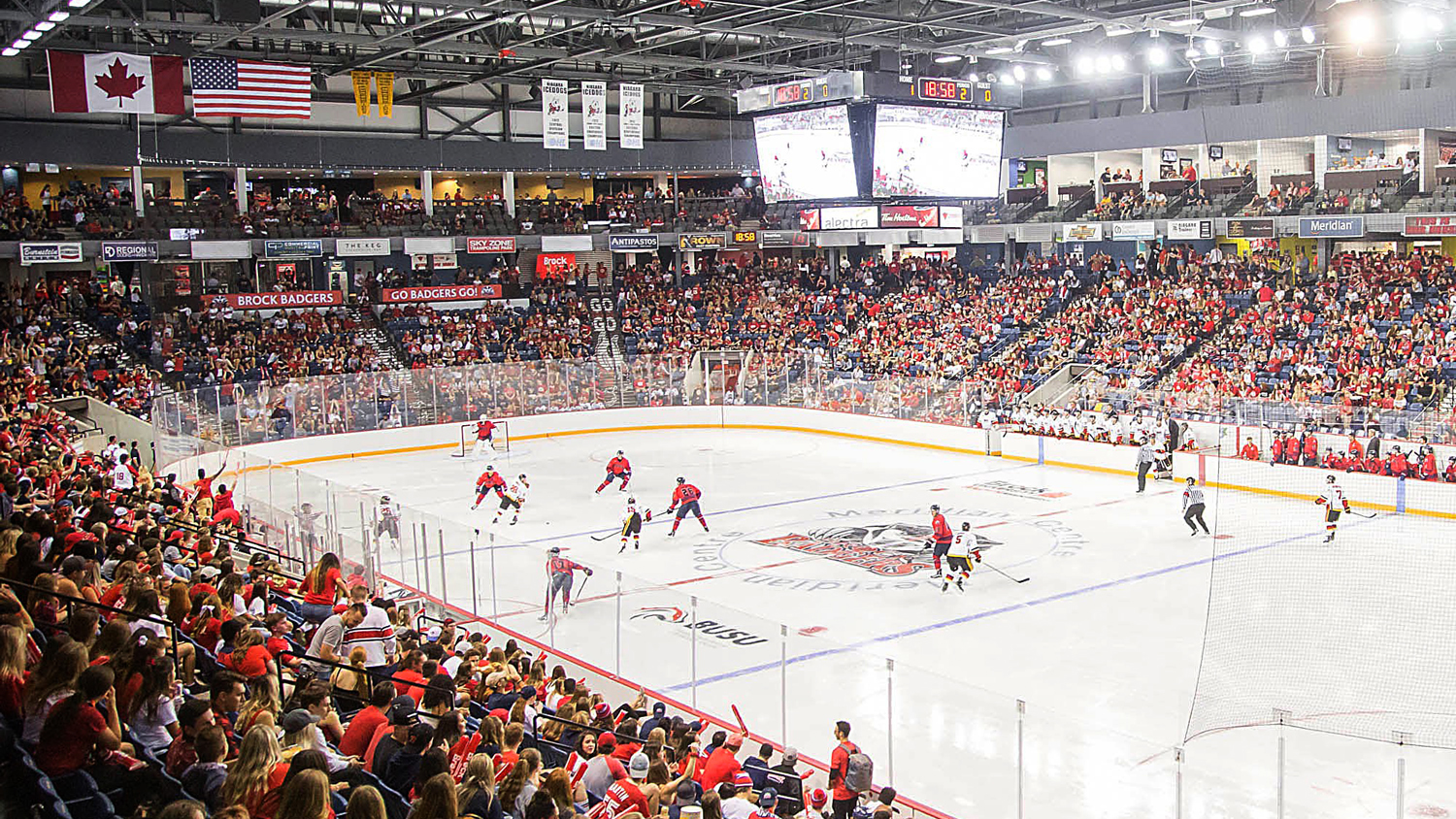 The Brock Badgers men’s hockey team host the Guelph Gryphons at the Meridian Centre in downtown St. Catharines on Friday, Sept. 23 at 7 p.m.

It’s a downtown showdown three years in the making.

On Friday, Sept. 23, the Brock Badgers and Guelph Gryphons men’s hockey teams will face off at the Meridian Centre in St. Catharines, marking the return of the fan-favourite Steel Blade Classic hockey game held last in 2019.

The 22nd instalment of one of Brock’s most celebrated and anticipated events will get underway with a 7 p.m. puck drop.

“Steel Blade is one of the best nights of the year. The adrenaline you feel from your fellow students is like no other,” he said. “It’s an event that everyone who comes to Brock looks forward to being a part of.”

A Master of Accountancy student from Niagara Falls, Marino will lace up for his third Steel Blade game next week.

“I still get that same feeling as if it was my first Steel Blade,” he said. “The cherry on top of the evening will be having my friends and family experience this game. The return of Steel Blade is something we’ve all looked forward to and I’m excited to play in front of them.”

The Badgers and Gryphons are tied 2-2 in Steel Blade action since the event moved to the Meridian Centre in 2016. In its 17-year history, the Badgers have raised the Steel Blade trophy — a sword carried by sergeants of the Upper Canada Artillery Units and Royal Artillery during the War of 1812 — 11 times, including six consecutive years.

Marino and the leadership group of alternate captains Justin Brack, Cole Thiessen and Jonathan Schaefer lead the Badgers into the 2022-23 campaign after a deep playoff run last season.

Brock compiled a record of 7-5-2, including three consecutive playoff victories before hosting its second Queen’s Cup and making its third appearance in the U SPORTS University Cup national tournament.

Tickets for the Steel Blade Classic — part of Brock’s Homecoming celebration — are now on sale at ticketmaster.ca

General admission Lower Bowl tickets are $30 each, with $1 from each ticket donated to the Brock University Students’ Union Food First program.

Community members and alumni also have the opportunity to watch the game from the upper Club Level of the Meridian Centre. Club Level tickets — $40 for adults and $20 for children aged three to 12 — include access to a private bar and complimentary snacks (while supplies last). Children aged two and under are free. Alumni can purchase tickets through the Brock Homecoming website.