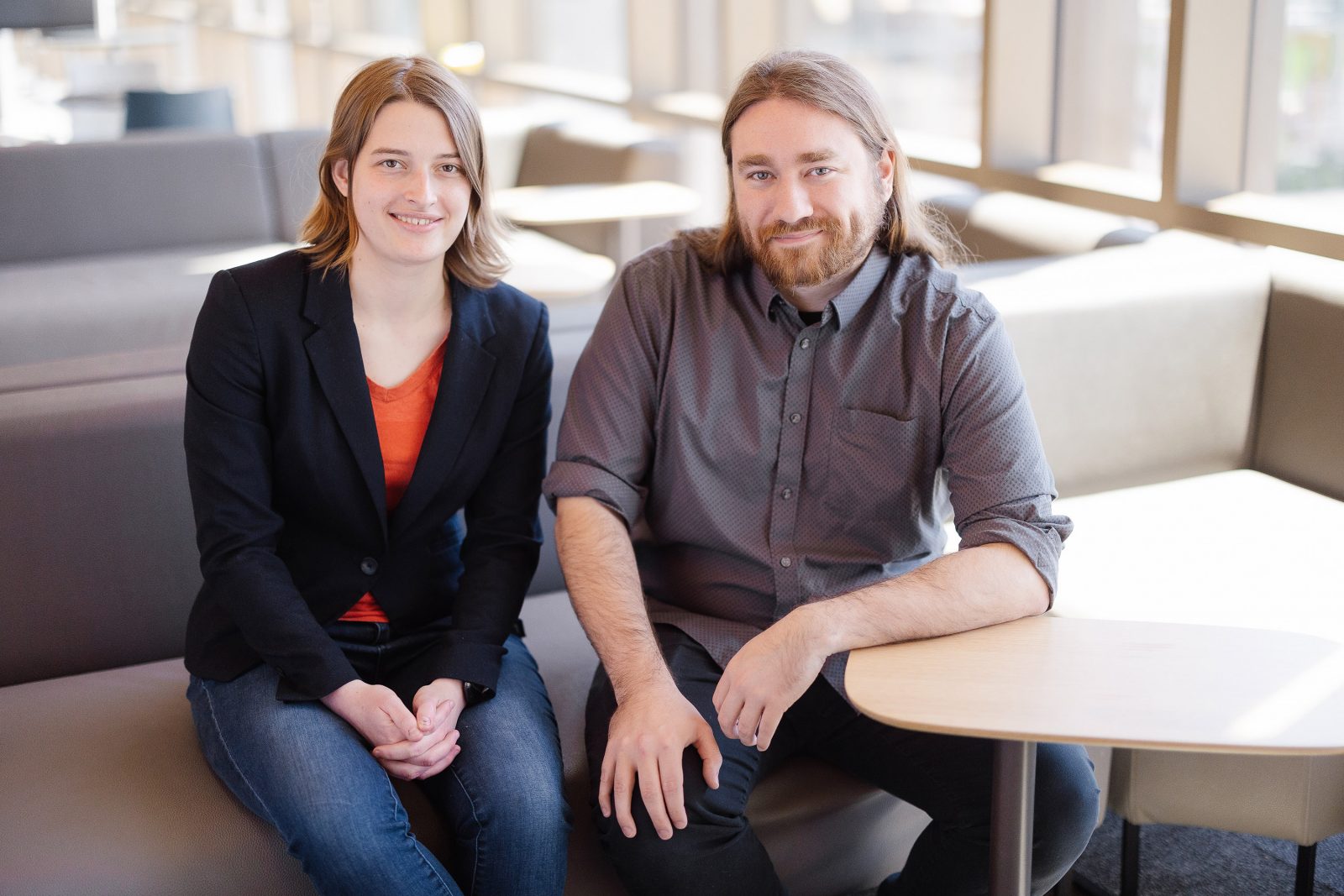 This is one in a series of stories featuring businesses in the Brock LINC’s incubation program, the LINCubator. The LINCubator supports a small cohort of early-stage businesses and helps them reach their next stage of business development. The eight-month program combines workshops, mentorship, networking, business coaching and partnerships with local investor groups. For more information on the LINCubator, visit brocku.ca/linc/lincubator

Agusia Krzywinska (BSc ’20) and Adam Henderson (BA ’20) want to make their mark in the booming gaming industry, but they’re determined to do it their way — for the sake of their employees and gamers alike.

Graduates of Brock’s GAME program, a highly competitive program offered by the University’s Centre of Digital Humanities, the Department of Computer Science and concurrently with Niagara College, the pair launched their mobile game studio, Adjective Noun Studios, following graduation in 2020.

The idea for the company was sparked during a bus ride leaving the University’s main campus in 2019, when Henderson noticed an update to his favourite game on his phone was repeatedly asking him to spend money to continue playing. These ‘microtransactions,’ which request users to pay more to win, had been growing in popularity at the time.

“We had already been discussing the idea of making our own studio, but this experience solidified the exact type of game that we wanted to make,” says Henderson, whose focus at Brock was on game design. “From there on, our main goal was to make great games that didn’t have microtransactions, ads, subscriptions, loot boxes or anything else to get in the way of the fun of the player.”

Krzywinska and Henderson applied to Brock’s Kick-Starting Entrepreneurship program, which helps young entrepreneurs with a business idea to further develop their goals through mentorship, coaching and building community with other participants.

Since its launch, Adjective Noun Studios has released two games: Fisherman and the Sea, and Hotel Hermes — the latter of which was nominated for Best Indie Mobile Game at the 2021 Canadian Game Awards.

Through their new business, Henderson and Krzywinska had creative freedom to develop games they were passionate about, but they quickly learned the typical game studio lifestyle is not sustainable long term. The industry is notorious for long working hours with little to no breaks, which did not align with the values of their new business venture, the pair says.

“The gaming industry is rife with issues that exploit workers, from 80-hour workweeks to exploitive contracts, to unsafe and discriminatory workspaces,” says Krzywinska, whose concentration at Brock was on game programming. “For us, making the game we dream of is important, but never at the expense of our employees’ physical and mental health.”

Now with six full-time employees, Adjective Noun Studios works remotely and has no office hours but relies on set times a week where the team meets to discuss projects and collaboration efforts across the company. This flexibility allows the team to work from all over Canada, hailing talent from Newfoundland, Toronto and St. Catharines, and collaborating with companies from Quebec and British Columbia.

“In a creative industry like game development, you can’t be expected to be creative all the time, every day,” says Henderson. “Sometimes part of the creative process is taking an hour to go to the park, walk the dog or just relax and recharge your creative mojo. Without those chances to relax and reflect, you just have a recipe for burnout.”

Although the business is thriving creatively, its team is struggling to gain visibility in an oversaturated market and has turned to Brock’s LINCubator for help.

“There are hundreds of new games being released daily,” Krzywinska says. “Finding a way to navigate through that noise and get noticed is a huge marketing challenge and has been by far the area we’ve had the most trouble in.”

Through the LINCubator program, Krzywinska and Henderson have had access to mentors who have connected them to professionals in their field, offering insight and tips on marketing efforts. The program has also opened them up to new opportunities to build professional relationships with other young entrepreneurs in tech.

“For us, 2022 has been our year of expansion and reflection,” Henderson says. “Up until now, our focus has been keeping our heads above water. It has only been recently that we’ve been able to catch our breath and reflect on what kind of company we want to be and where our priorities lie.”

Adjective Noun Studios is still growing. This year, they are producing their next game, which will launch them from a mobile game studio to a multi-platform studio for mobile and PC game users.