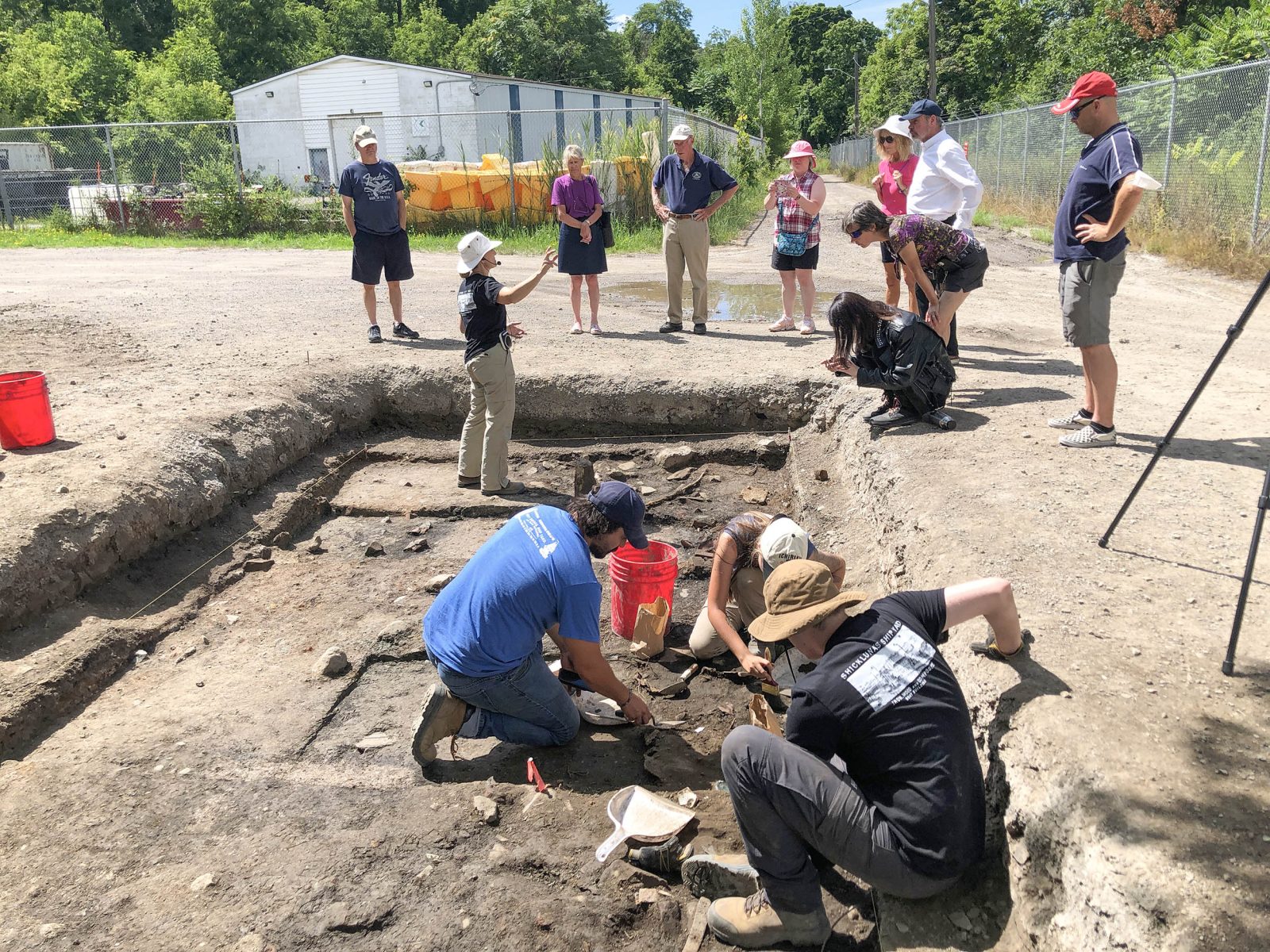 Archaeologist Kimberly Monk (standing at back of trench, with headset) walks visitors through the Shickluna Shipyard site while a group of field school participants (front) continue excavation of a 19th-century boat house.

The Niagara community came ready to see archaeology in action this week at the site of the former Shickluna Shipyard in downtown St. Catharines.

More than 100 people visited the dig site Wednesday, Aug. 10 for the first of three public tours welcoming people to watch the archaeological excavation take place. The remaining tours will be held Saturday, Aug. 13 and Sunday, Aug. 14 from 11 a.m. to 3 p.m.

A team of Brock University field school students and volunteers, led by archaeologist and Adjunct History Professor Kimberly Monk, have been excavating a worker’s cottage and boathouse at the site since July 11.

“We’re so delighted by the local public joining us at the site,” Monk said following Wednesday’s event, which she deemed a “fabulous success.”

“To be able to share with them this history, to talk to them about the archaeology and for them to see it first-hand is so important to telling the narrative of Niagara’s history,” she said.

Visitors learned about the history of the site — once a busy industrial hub — and some of the ships that were built at the Shickluna Shipyard in the 19th century. In addition to viewing all three of the project’s operating areas, they were able to watch students at work and learn about the archaeological process.

Colleen Beard, Brock Librarian Emeritus, and David Sharron, Head of Brock University Library’s Archives and Special Collections, were on hand to explain how historical maps and documents were used alongside modern technology to locate the excavation sites.

Also in attendance was James Lang, who was a field school student in 2019 when the first five-week excavation took place at the site. He has continued to be involved in the project as a volunteer since.

“Open days like this are very important in archaeology in that they give the general public a chance to come in and see what’s going on,” he said. “Being able to see archaeology happen first-hand allows the public to connect with the work and the history.”

One of the highlights of the day for Lang was hearing stories and memories from the public about the types of artifacts the team has been finding. Among the artifacts on display during the open house were two ceramic pieces the team had not been able to identify.

“I’ve had several people look at these pieces and tell me they might be from the old knob and tube wiring systems they had when electricity was first installed in houses,” Lang said. “Now I’m going to do some research on knob and tube to get a better identification.”

Public tours at the Shickluna Shipyard continue Saturday, Aug. 13 and Sunday, Aug. 14. The event is free, but pre-registration is required on Eventbrite.