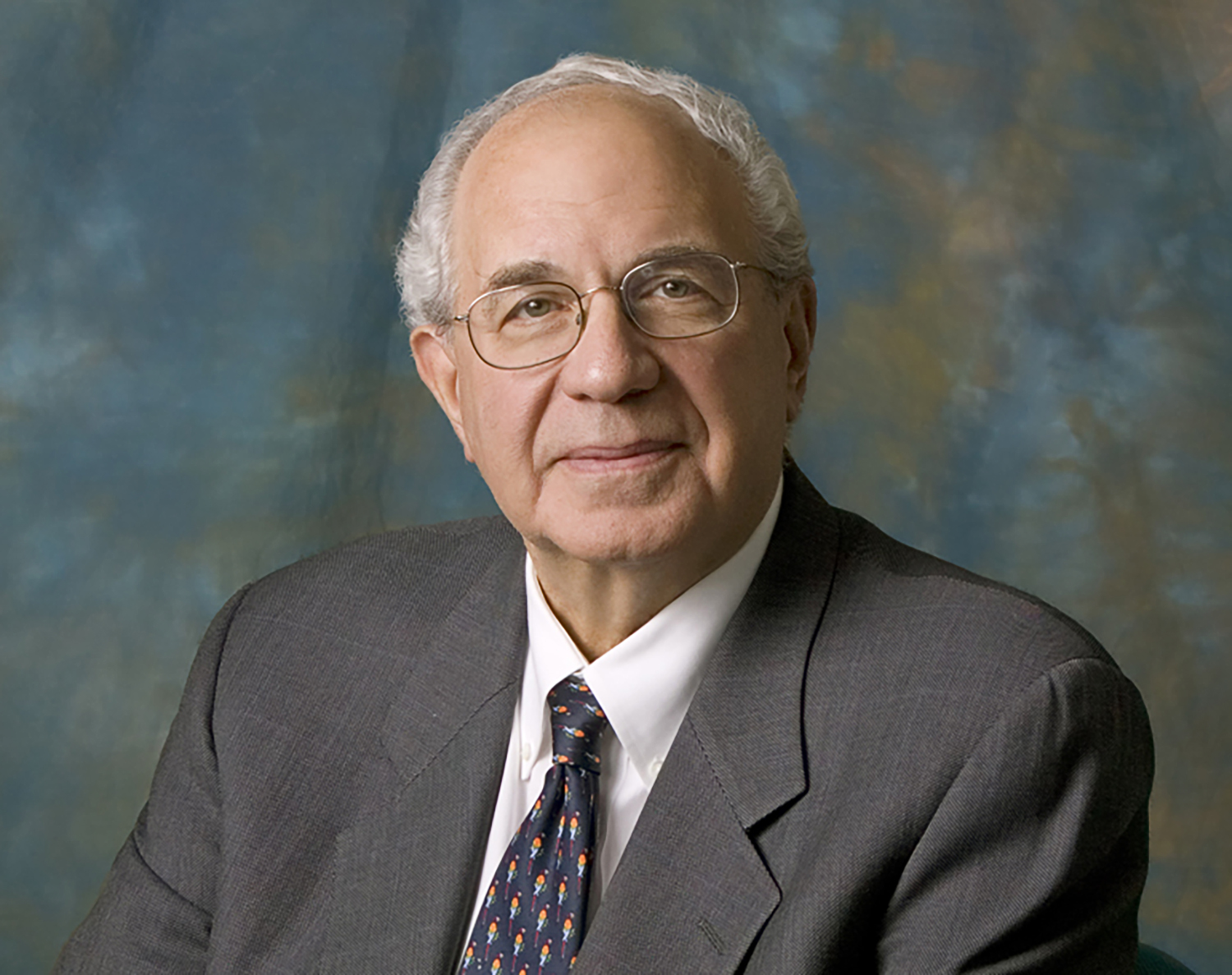 Former Brock University Chancellor Ned Goodman passed away on Sunday, Aug. 7 at the age of 85.

With one stroll through campus, it’s easy to see the significant impact Ned Goodman has had on Brock University.

The respected international businessman and philanthropist, who served two terms as Brock’s seventh Chancellor, passed away Sunday, Aug. 7 at the age of 85.

In 2012, Brock’s business Faculty was renamed the Goodman School of Business in recognition of a transformational gift made to the University by the Goodman Family Foundation. The Goodman family’s generous donation provided key capital for an ambitious $22-million expansion and reconstruction of the Goodman School facility, which officially opened its doors in February 2019. The project also received a $10-million commitment from the Government of Ontario and was supported by many other generous donors.

During his time as Chancellor from 2007 to 2015, Goodman bestowed thousands of degrees upon graduates during years of Convocation ceremonies, also offering words of inspiration as they embarked on the next chapters in their lives. In 2015, during his final Convocation in the role, he received an honorary doctorate from Brock in recognition of his distinguished achievements as a preeminent business and investment counsellor, and for his ongoing philanthropic support of multiple institutions and causes. 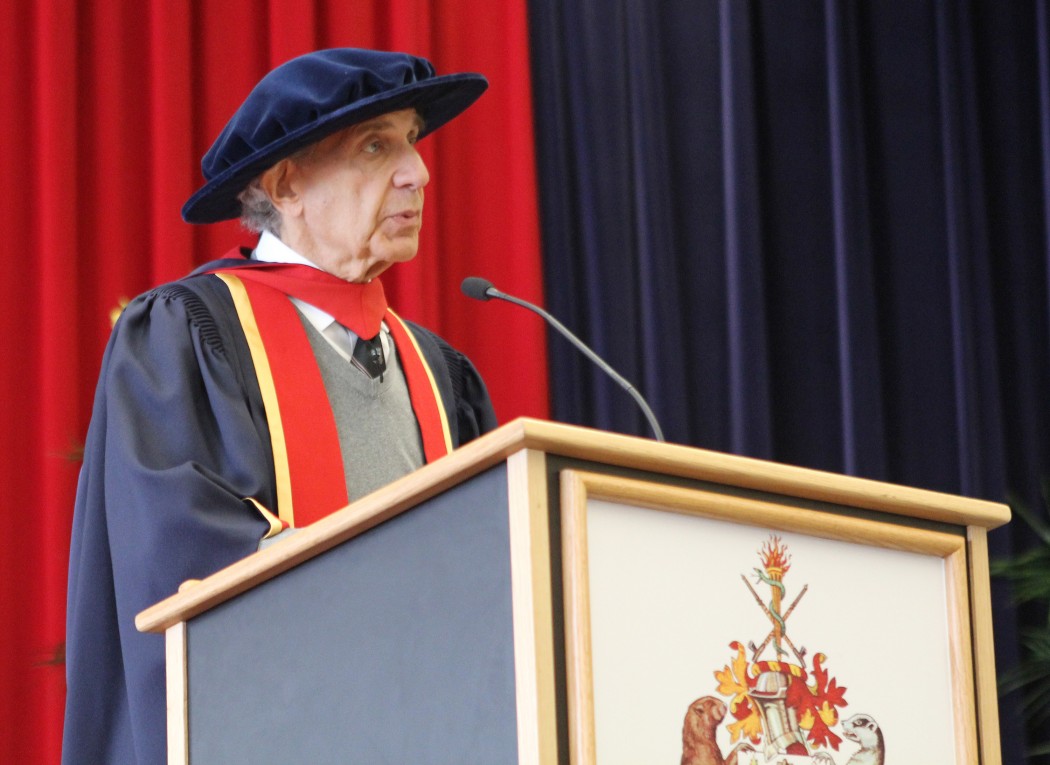 “Dr. Goodman’s legacy lives on through the students who attend the business school bearing his name and through the graduates who were moved by his words to create change in the world,” says Interim Brock University President Lynn Wells. “His generosity and drive to succeed will continue to be an inspiration to generations of Brock University students. He has touched so many lives and will be greatly missed.”

During a career that spanned more than 40 years, Goodman applied his geological training and business acumen to help build several successful mining companies — notably International Corona and Kinross Gold — and nurtured many other mineral producing companies through astute and timely investments.

In addition to being an outstanding member of the philanthropic community, Goodman was considered one of the leading architects of Canada’s investment management industry.

His impact as a securities analyst and portfolio manager helped shape Canada’s investment management industry. As founder and CEO of Dundee Corporation and Dundee Wealth, and as chairman of Goodman and Company, he shaped an impressive offering of financial services and investments.

He also founded the Goodman Institute of Investment Management at Concordia University in Montreal, where he previously served as an adjunct professor and a member of the Associates of the Chancellor, as well as the Goodman School of Mines at Laurentian.

In 2016, he was appointed to the Order of Canada — the country’s highest civilian honour.

His many achievements were a testament to his countless contributions, both in business and in the community, including at Brock, says Barry Wright, Interim Dean of the Goodman School of Business. 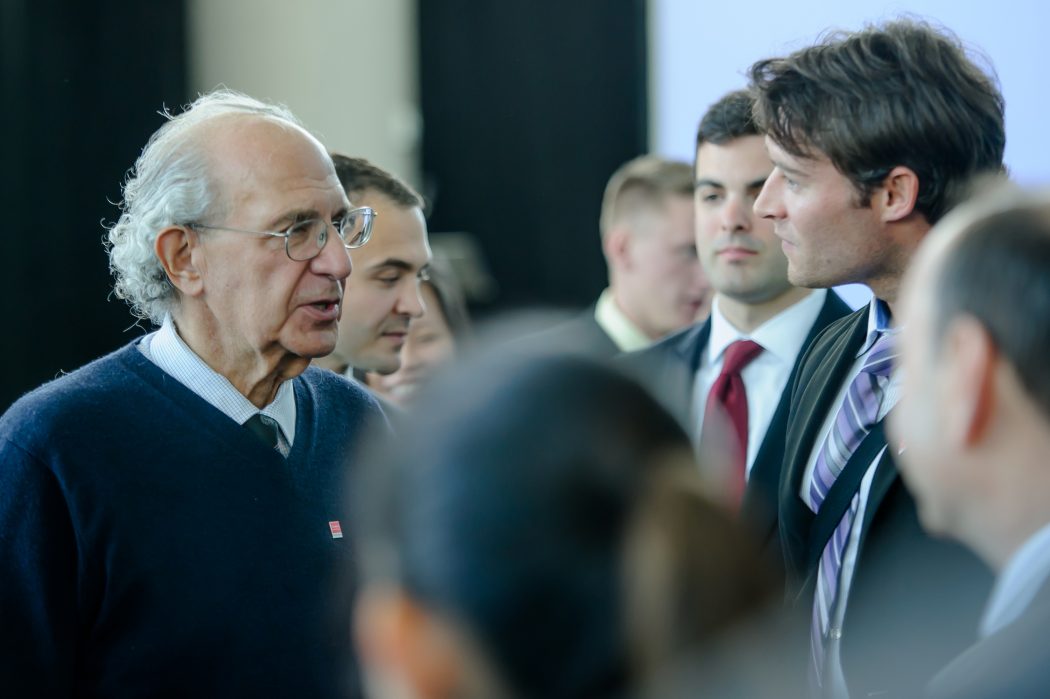 “I will forever remember Dr. Goodman’s strong spirit, his positive approach to life and his genuine interest in every student he met,” Wright says. “The Goodman School’s values of passion, perseverance and professionalism can be directly attributed to Dr. Goodman’s approach to both business and life. He will be missed.”

“Ned Goodman has brought personal warmth and wisdom to the graduation ceremonies for tens of thousands of graduates,” Lightstone said at the time. “He is a stalwart supporter and champion for the business school that bears the Goodman name, and he is never more happy and spirited at Brock than when engaging students in dialogue and debate about business and economic trends.”

Goodman contributed widely to community-building as chairman emeritus of the Canadian Council of Christians and Jews, a governor of Junior Achievement of Canada, a vice-chair of the Heart and Stroke Foundation of Ontario and a member of the Toronto Society of Financial Analysts and the Canadian Institute of Mining and Metallurgy. He was a founding director of the Roasters Foundation, the Goodman Family Foundation and the Dynamic Fund Foundation.

In 2012, he was inducted into the Canadian Mining Hall of Fame and was awarded the T. Patrick Boyle Founder’s Award, given by the Fraser Institute to a distinguished individual who has achieved lasting and recognized accomplishments in the promotion of freedom and free markets, entrepreneurship and philanthropic support for private sector, non-profit enterprises.

A funeral service will be held for Goodman at Benjamin’s Park Memorial Chapel, 2401 Steeles Ave. W. in North York, on Tuesday, Aug. 9 at 3 p.m.

Brock University will lower its flags to half-mast on Tuesday, Aug. 9 in Goodman’s honour.

Goodman is survived by his wife of nearly 62 years, Anita Goodman, his four sons, 16 grandchildren and two great-grandchildren.