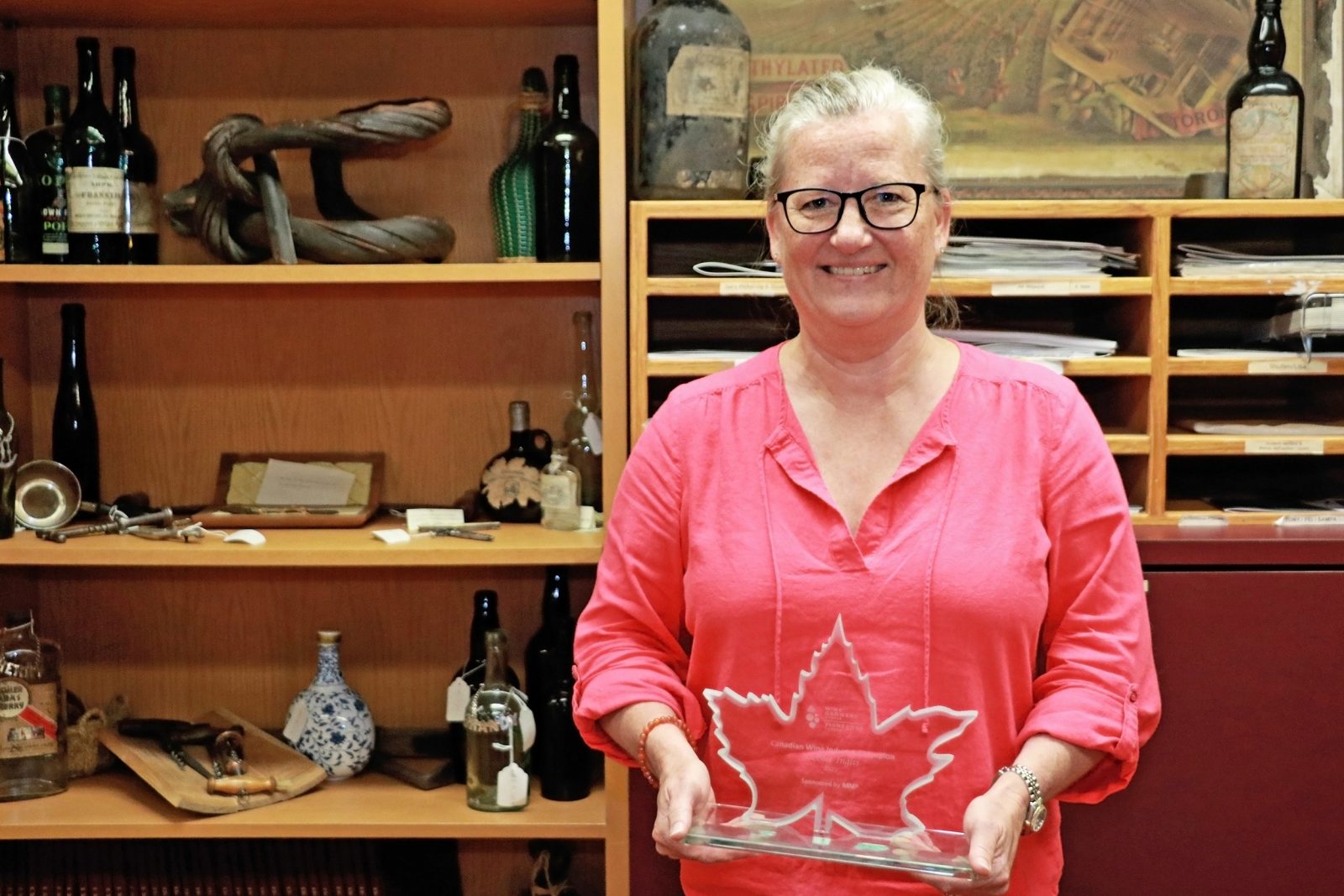 Debbie Inglis has been involved in the grape and wine industry for virtually her entire life.

From her childhood days at her family’s Niagara vineyard to her time at the helm as Director of Brock University’s Cool Climate Oenology and Viticulture Institute (CCOVI), she has remained steadfast in her commitment to growing the Canadian grape and wine industry.

The award is presented to an individual who has provided exemplary support for the Canadian wine industry through media, research, policy and regulation, education, advocacy or other means, significantly contributing to the overall strength and long-term viability of the industry. It also recognizes the extensive community of Canadian wine champions who are passionate about Canadian wine and industry prosperity beyond those employed directly in the industry.

One factor central to Inglis’ vital contributions to the advancement of viticulture and oenology in Canada is her ability to create connections. Whether it is across the local wine community, between universities nationwide, with government agencies and public stakeholders or — at the core — between researchers and wine industry partners, Inglis is a gifted team builder, said Allan Schmidt, CCOVI Executive Committee industry member and President of Vineland Estates Winery.

Schmidt, who nominated Inglis for the honour, hailed her as one of Canada’s most noted oenology researchers and research leaders.

He called it “striking” for someone with so much conventional scientific success in publication and grant-winning to be so active and committed to the popularization and public uptake of science.

“Dr. Inglis is an academic leader with respect to structuring research to make it responsive to industry and community interests,” he said. “At the same time, she has shown a profound commitment to the principle that the implications of research should be intelligible and should make a difference to the Canadian grape and wine industry partners.”

Inglis’ involvement in the industry dates back to 1970, when her father, Stan Murdza, and his wife Doreen bought their first vineyard in Niagara. Her family was one of a handful of grape growers that were early adopters of vinifera vines in Canada and began planting Chardonnay, Riesling and Pinot noir in the 1970s.

Now known as Montague Vineyard of Inniskillin, the land was used as an experimental vineyard at the time as her family learned how to manage varieties, which were at that point, new to the region.

“I look now at how far our industry has come over the past 40 to 50 years, across all of Canada from those early days,” said Inglis. “We continue to identify the best varieties that grow in each region, vinifera and hybrids alike, to produce incredible wines, each with a unique regional style and flare.”

From the agricultural challenges and needs of grape growers to the science of wine tasting,  effects of climate change and advancements in technology to assess consumer preferences and marketing techniques, Inglis has consistently demonstrated her commitment to knowledge transfer rooted in an approach that makes it useful and accessible to those who can benefit from it.

She said she is deeply honoured and moved to be this year’s recipient of the Wine Industry Champion Award and called it a highlight of her professional career.

“There is so much to champion and be proud of,” she said. “Our industry is full of innovators, entrepreneurs and passionate people. We have a remarkable story and I never tire of speaking of it, adding to it and being part of it.”

The Canadian Wine Industry Awards are presented annually by Wine Growers Canada (WGC) and recognize individuals, organizations and businesses that have gone above and beyond to support and enhance the wine industry in Canada, while celebrating the industry’s success, leadership and outstanding commitment.

“WGC is proud to honour Debbie for her exceptional contribution by focusing on the research priorities of the Canadian grape and wine industry,” said WGC President and CEO Dan Paszkowski. “Through hard scientific work and leadership, ranging from yeast to Icewine, and being named Director of CCOVI to being crowned Grape King, Debbie is breaking down barriers and is an internationally recognized advocate for the Canadian wine industry.”