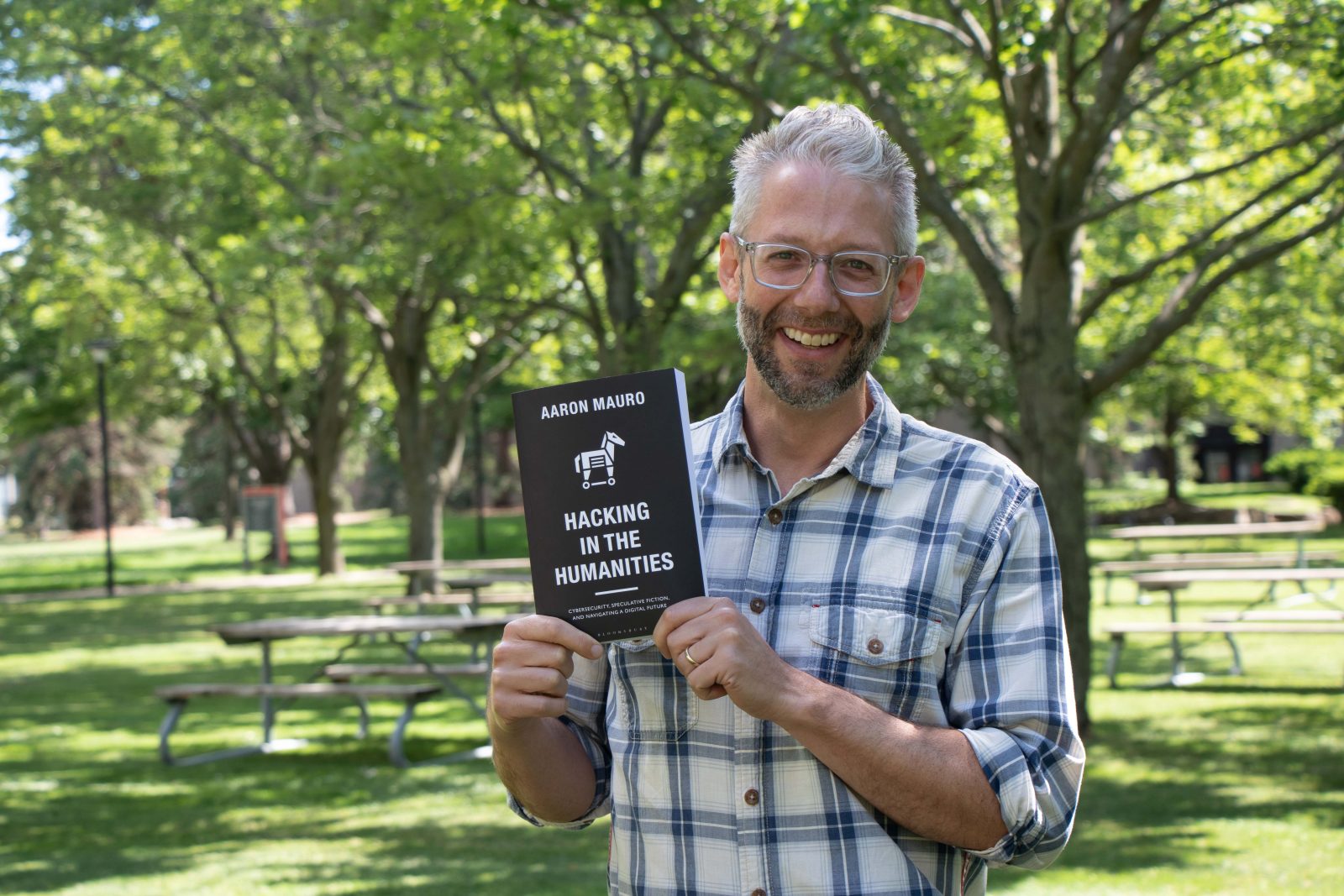 Aaron Mauro, Assistant Professor with Brock University’s Centre for Digital Humanities, advocates for increased digital literacy to better understand how governments and corporations use technology to shape our lives in his new book, Hacking the Humanities: Cybersecurity, Speculative Fiction, and Navigating a Digital Future.

Aaron Mauro’s new book uses that fiction to encourage people to think about how technology is shaping our lives.

“Cyberpunk literature is a useful, imaginative space to think about the current challenges we face with technology,” says Mauro, Assistant Professor with Brock University’s Centre for Digital Humanities. “A lot of the problems we face with surveillance and the hyper-financialization of human experience have all been described in the literature from the ’80s until now.”

His book, Hacking in the Humanities: Cybersecurity, Speculative Fiction, and Navigating a Digital Future, explores issues including digital literacy, cryptography, culture jamming, bio hacking, user authentication and digital identity, and considers how fiction can help us think about and respond to everyday events.

“There is a contribution that can be made from the humanities to the cybersecurity industry and security practices in general by connecting what it is to be a digital citizen and to be literate in technology as well as to be imaginative about the ways technology can shape our experience,” says Mauro.

“The humanities are really well positioned to help educate digital citizens to be able to navigate these kinds of questions in a time of a crisis and in a time when we’re working to interpret events happening globally.”

While arguing for increased digital literacy, Mauro’s book also examines online activism that challenges hacker stereotypes. One such example is the Parler Tricks Hack around the Jan. 6, 2021 events in the U.S.

Parler was the social media tool used to plan and co-ordinate the attacks on the U.S. Capitol building. Before the site could be shut down, hackers exploited a security vulnerability to download and archive 33 terabytes of data. The data, including users’ posts and GPS co-ordinates, was cited multiple times in former U.S. President Donald Trump’s second impeachment hearing.

“The result of the hack was a whole host of citizen-made tools to identify attackers on the Capitol,” says Mauro. “A still-anonymous hacker writing a few hundred lines of Python script was able to shape the course of history and create a situation in which a U.S. president has been impeached twice.”

This kind of hacking is very different from the stereotype of the hacker seen in popular media. The image of the hacker from CSI or ’90s hacker movies is detrimental to training a citizenry that can monitor and engage with power structures existing online, says Mauro.

“The Parler Tricks Hack is real-world engagement in politics,” he says. “This is the kind of digital literacy we need to be able to participate meaningfully in democracy in the 20th century.”

Digital citizens need to understand how technology impacts different groups in different ways and how large corporations disseminate technology globally. Humanities provides the tools and insights that can be used to oppose a culture of surveillance, disinformation, misinformation and coercion, Mauro says.

“We need to have these conversations publicly so we can determine the social norms and etiquette that we’re willing to accept,” he says. “Cyberpunk should not be a road map; it should be a warning.”