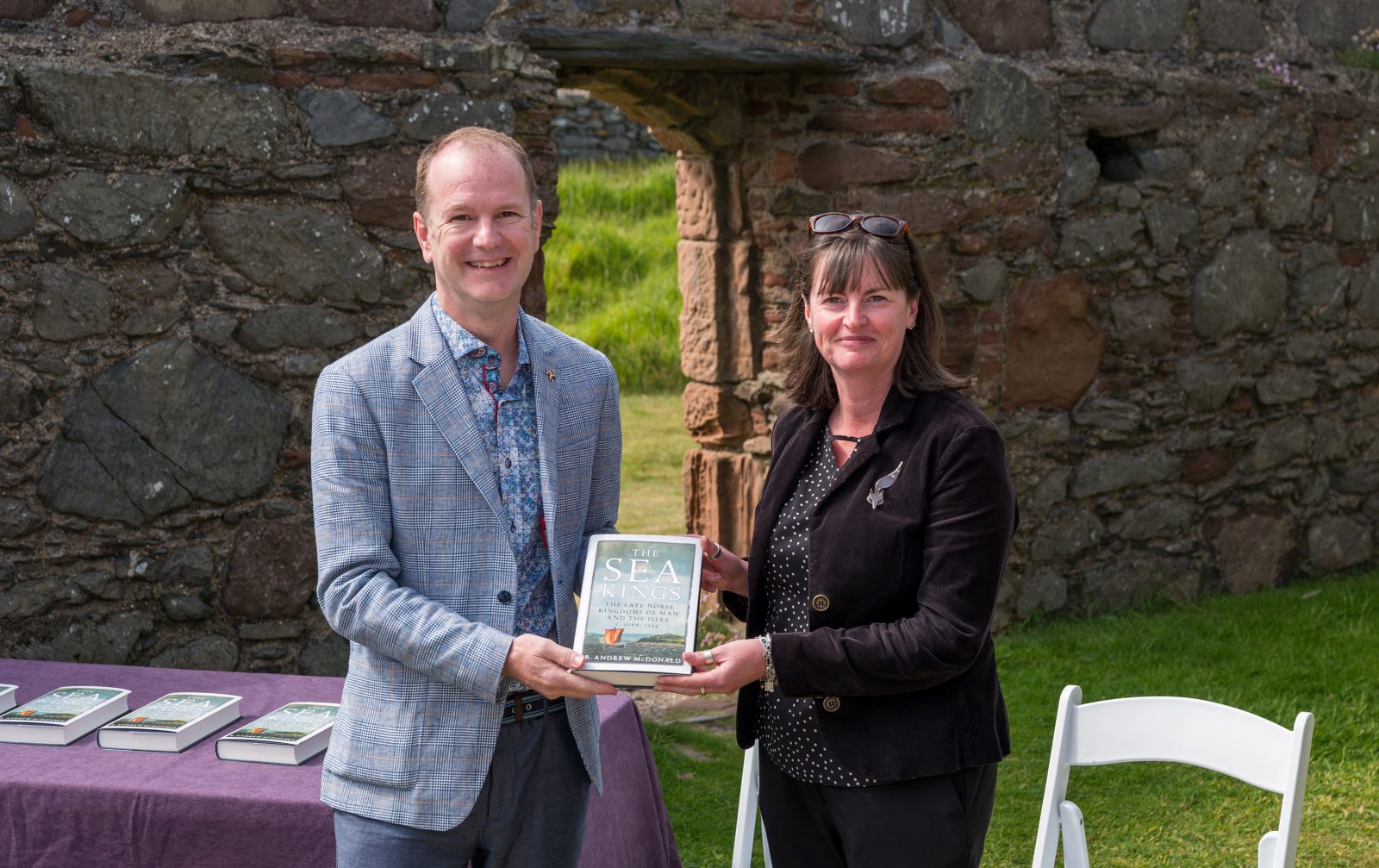 Professor Andrew McDonald is the recipient of this year’s Faculty of Humanities Award for Excellence in Research and Creative Activity. He is pictured at the launch of his book The Sea Kings: The Late Norse Kingdoms of Man and the Isles c. 1066-1275 with Allison Fox, Curator, Archaeology, of Manx National Heritage in 2019. (Photo courtesy of Manx National Heritage)

It was a conversation around the family dinner table that gave Andrew McDonald the idea to share his research through video.

The Professor with Brock’s Department of History and Centre for Medieval and Renaissance Studies said his daughter was using many TED lessons — videos from a non-profit organization devoted to spreading ideas — in her high school classes.

“We spent a lot of time over suppers during the pandemic talking about what she had been watching,” says McDonald, the recipient of this year’s Faculty of Humanities Award for Excellence in Research and Creative Activity. “My family said one night, ‘Why don’t you do one on the Sea Kings?’”

With COVID curtailing research travel and access to libraries, archives and documents, McDonald was looking for new outlets for his work. His TED-Ed pitch was accepted, and he spent the rest of 2020 working with TED to develop the short video The Rise and Fall of the Kingdom of Man. The video was published in 2021 and currently has more than 945,000 views.

“Compressing 20 years’ worth of research and a 500-page monograph into a script of 800 words and four-and-a-half minutes was an amazing challenge,” says McDonald. “It was a really fun and interesting thing for me to do and it forced me to think hard about my work. It’s reached a far wider audience than anything I could write or publish.”

TED-Ed is the youth and education arm of TED that supports learning through producing original animated videos and supporting interactive lesson plans. TED-Ed animations and lessons are video collaborations between subject experts, educators and creative professionals.

In addition to a prolific publishing schedule, McDonald maintains a close working relationship with Manx National Heritage, the government organization responsible for heritage in the Isle of Man. He has done many public lectures, seminars and events in the Isle of Man, including the launch of The Sea Kings.

Later this year, Manx National Heritage will be publishing A Visitor’s Guide to the Medieval Kingdoms of Man and the Isles, a guidebook and introduction to Manx history written by McDonald.

McDonald’s publications include collaborations with retired Brock English Professor Angus Sommerville. The two are currently working on the fourth edition of The Viking Age Reader and a translation and commentary of The Chronicles of the Kings of Man and Isles.

“It’s a huge honour to be the recipient of this award and I’m very grateful,” McDonald says of the research excellence honour. “I think it means more coming right now after two years of pandemic and all the challenges we have faced in terms of curtailing traditional research.”

Andrew McDonald and Angus Somerville  previously spoke to Foreword, Brock University’s Faculty of Humanities podcast, about their research in 2020.