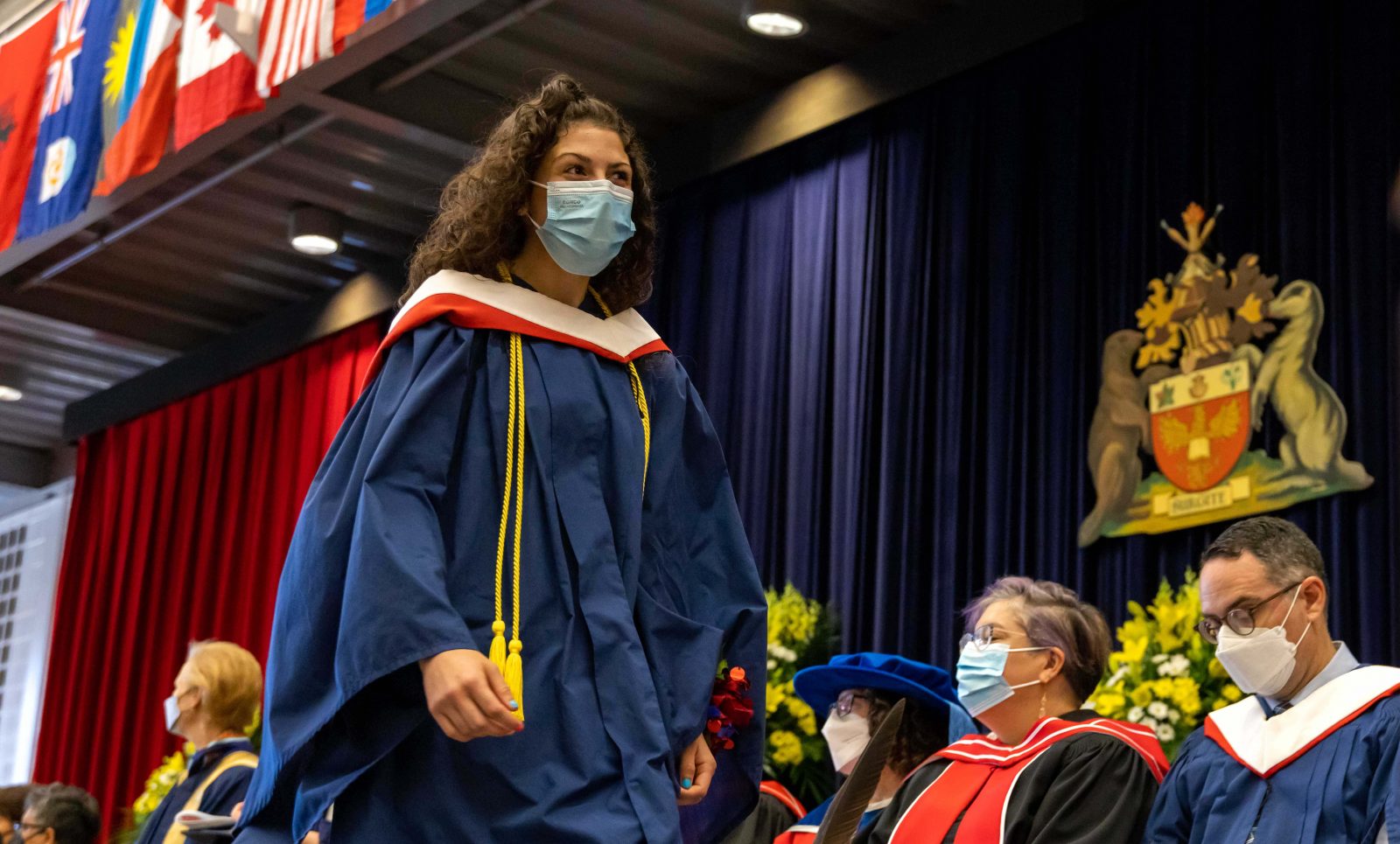 Spring Convocation, the first held in-person at the University in more than two years, continues daily until Friday, June 17, with more than 3,500 graduands set to cross the stage in Ian Beddis Gymnasium.

On Tuesday, June 14, Samantha Romano, a highly decorated wrestler, was among Brock’s latest graduates, receiving her Psychology degree from the Faculty of Social Sciences.

Romano has played a key role as a member of the Brock women’s wrestling team, extending their provincial and national winning streaks since joining in 2017.

Her most unforgettable moment as a Badger, however, was the result of receiving a different kind of hardware while standing on the winner’s podium.

In her final season as a Badger, Romano captured a gold medal in front of a hometown crowd when Brock hosted the 2022 Ontario University Athletics (OUA) Wrestling Championships in Bob Davis Gymnasium at the beginning of April.

Moments after receiving her gold medal, and posing for photos alongside her fellow medal winners, Romano’s boyfriend, Anthony Romero, approached the podium, got down on one knee and proposed as the gym exploded in cheers.

“At the moment he got down on his knee, I was very confused and thought he was just teasing me. I thought, ‘this isn’t the time to be making a joke,’” Romano said. “Since I was young, I always dreamed of being proposed to on the podium after winning a big tournament. I’ve never told Anthony that. I always wanted him to pick a moment he felt was right. He read my mind.”

During her time at Brock, Romano captured multiple provincial and national medals while also being named the Ontario University Athletics (OUA) Rookie of the Year in 2018 and making the Canadian team for the 2021 U23 World Championships.

“Sam is a leader amongst our women at Brock. She accomplished a great deal as a Badger while helping us win numerous national titles,” said Brock wrestling coach Marty Calder. “She represented our program and the school with pride and dignity. She will be difficult to replace on our roster.”

Romano started wrestling at the age of eight at her elementary school, Meadowcrest Public School, in Brooklin, a community in Whitby.

Initially assuming the sport was for boys, her interest was piqued when the school’s morning announcements called for anyone interested in joining the wrestling team to pick up a permission form.

“I remember a teacher telling us not to judge it until we tried the sport,” said Romano. “Wrestling surpassed my expectations. I liked the idea of being tough and doing something that not many other girls did. A year later, I was recruited to a local youth wrestling club, Team Impact, and everything took off for me from there.”

At Brock, Romano was surrounded by motivated and determined athletes. She trained alongside Olympians and inspiring wrestlers, including Jessica MacDonald (BA ’08, BEd ’08), a three-time world medallist, and World and Pan Am champion.

Romano said it was surreal when she arrived at Brock and started training alongside her role model. As a young wrestler, Romano looked up to MacDonald, who embodies everything she admired about women competing in the sport.

Romano credits MacDonald for getting her through one of her toughest times as a wrestler.

MacDonald had to receive reconstructive shoulder surgery a few months before Romano underwent her own in 2019. Despite her operation, MacDonald still won her weight class during the 2020 Olympic Wrestling Trials in Niagara Falls to claim her spot on the Canadian national team.

“Jessie is the definition of toughness,” Romano said. “Her performance and determination were a motivator for me, coming off a shoulder surgery myself and stepping back on the mats for the university championship season. If Jessie could do it, why couldn’t I? I am so grateful to have her as a role model.”

Following her graduation, Romano plans to maintain a busy schedule of working, volunteering, and wrestling while working towards applying to graduate school in November.

“My time at Brock came and went far too quickly. From the second I got to Niagara, I felt so welcomed, both on the mats and in the classroom,” she said. “The coaches and professors are invested in their student-athletes success. I’ve made lifelong friendships at this University over the past five years. Choosing Brock was one of the best decisions I’ve ever made.”