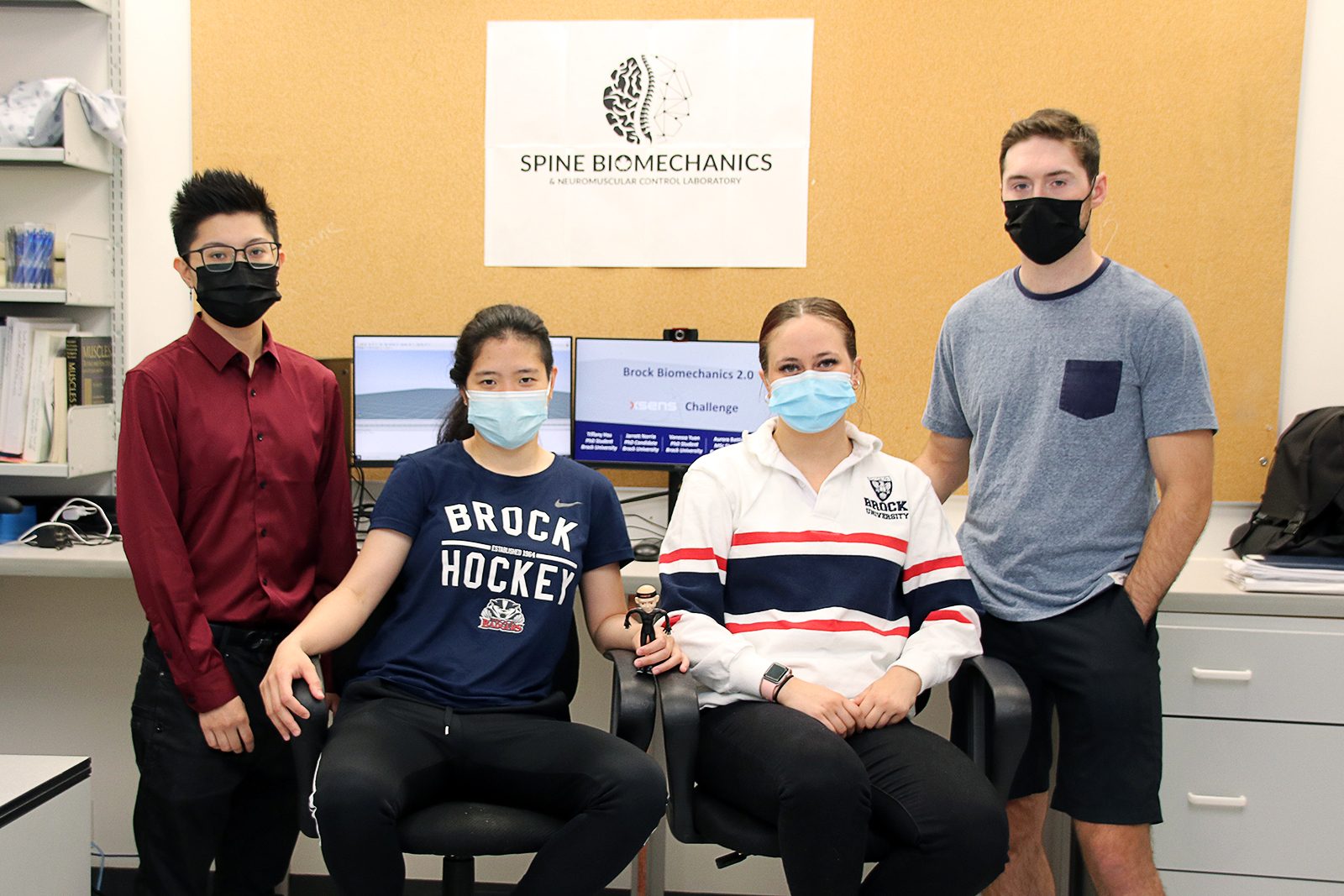 A team of Brock University Kinesiology graduate students have placed second in an international biomechanics challenge.

Hosted by 3D motion capture equipment provider Xsens, the competition asked participants to analyze data and create identification methods to assess whether medication given to patients with Parkinson’s disease was effective in reducing common symptoms, such as tremors, imbalance and freezing of gait.

The data used in the competition was collected using Xsens’ 3D motion capture equipment. Patients wore a full-body suit with sensors that collected data as they went about their daily lives.

“We typically collect data in a controlled environment like a lab, so one of the challenges we face is not being able to see where someone is moving,” said Jarrett Norrie, one of four challenge team members and a PhD candidate in Brock’s Spine Biomechanics and Neuromuscular Control Laboratory. “Xsens allows data collection without any cameras and alleviates some of the restrictions associated with traditional lab-based methods.”

Tiffany Hsu, a PhD student in Applied Health Sciences, manipulated the data to remove undesired traits so the team could focus solely on body movement. She used a statistical data reduction method called principal component analysis to assess variations in patient movement patterns when they are on and off medication.

Norrie then trained a classification algorithm to identify where in the body the tremors were taking place based on Hsu’s findings for a deep-level analysis.

“We wanted to know whether it was a left- or right-hand tremor, in both hands or somewhere else in the body,” he said. “We trained an artificial neural network — which is a machine learning prediction algorithm — to recognize and predict when and where tremors were occurring based on the wearable sensor data.”

Master of Science students Aurora Battis (BSc ’20) and Vanessa Yuan worked together to calculate margin of stability, which is a measure of how stable a person is during dynamic balance, such as walking, or static balance when standing.

“We were able to identify the number of incidences of instability between on- and off-medication states and detect freezing of gait episodes,” said Battis.

“During gait, we normally see that a person intentionally wants to initiate walking by ‘putting themselves off balance’ as they want to move forward by ‘falling’ onto each new step,” said Yuan. “With freezing of gait, they have the intention, but they are not able to fully propel themselves forward to initiate a step.”

After completing their analyses, students prepared a report and presentation that included animations illustrating variation of gait, tremors and stability.

Brock’s team was chosen as one of eight finalists from hundreds of applicants and were invited to provide a research talk.

In recognition of placing second, the students received a full-body 3D motion capture suit and a free six-month software licence to help conduct their research.

They also came away from the competition with new experiences applying academic knowledge to a novel and practical situation, which is useful for their future research and career paths.

Yuan, for example, researches occupational footwear and hopes to change the policies and procedures around safety boots.

“Margin of stability came up in my MSc thesis defense, so it was interesting to expand my knowledge of this measure through the competition,” she said. “Safety boots are standardized, but a lot of their regulations are based on robotic testing and do not necessarily factor human neuro motor control.”

The team is proud of their accomplishment and feels their academic background helped with the competition.

“A main advantage of our discipline is the technology and analysis techniques available to us,” said Norrie. “Biomechanics is a multi-faceted discipline crossing kinesiology, engineering, statistical and data science techniques, but in spine biomechanics, we’re coming up with more robust ways to monitor human motor behaviour.”

The team also feels they offered unique analyses by taking a different approach than other groups.

Hsu thinks the team placed well because their prediction model was strong and practical.

“We were the only group that did a prediction and analysis based on full-body movements and with full-body data, whereas a lot of the other groups did single joint analysis,” she said. “Our prediction can also be ‘live’ in the field, meaning we can do the prediction as the data is being collected in real-time, which could be beneficial for medical practitioners in clinical settings.”