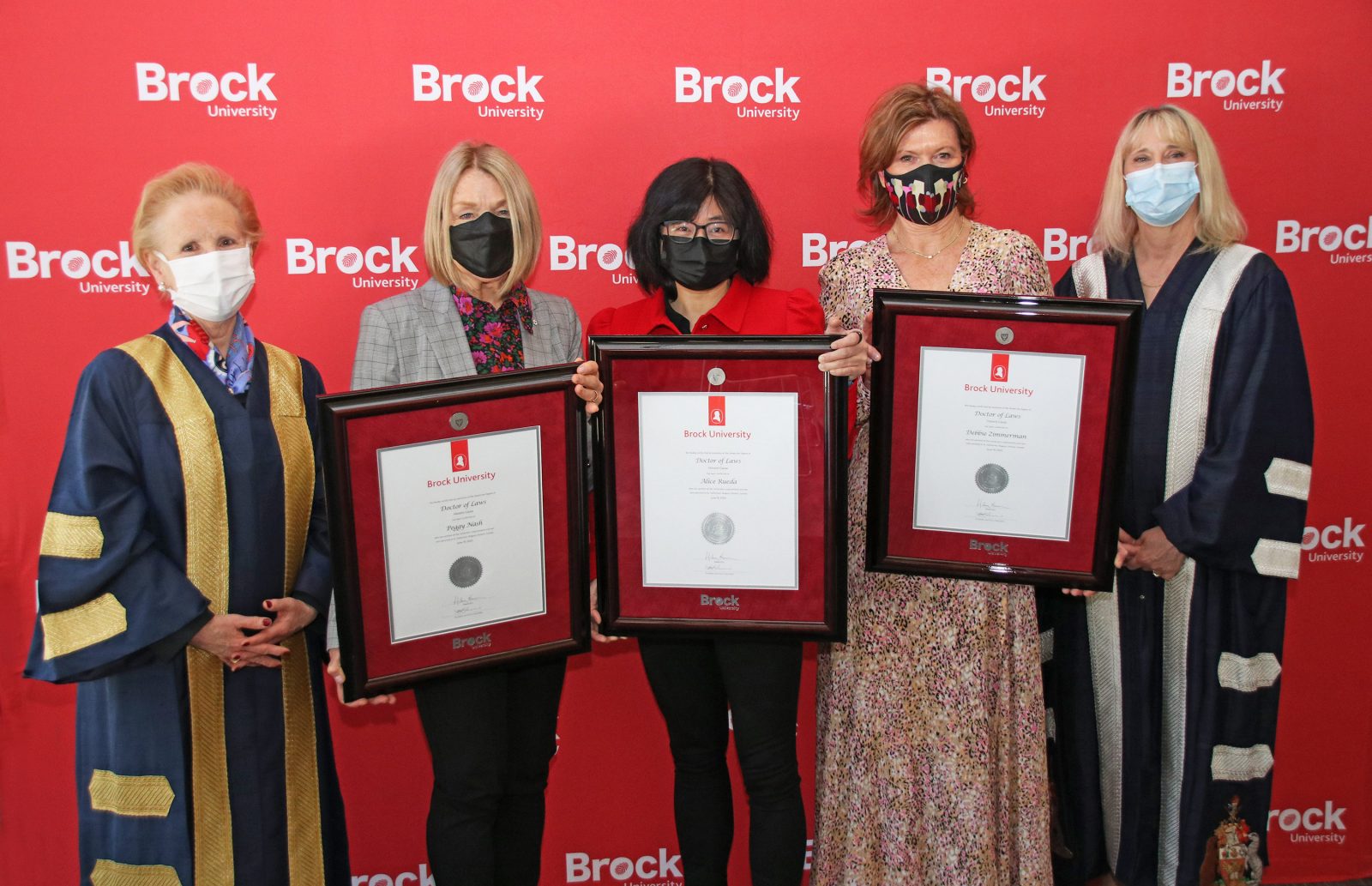 Peggy Nash, Alice Rueda and Debbie Zimmerman were awarded honorary degrees from the University at 2020 Spring Convocation, but because of the COVID-19 pandemic, there were no traditional in-person ceremonies.

Wanting to properly pay tribute, Interim President Lynn Wells and Chancellor Hilary Pearson hosted Nash, Rueda, Zimmerman and their guests for an event at Pond Inlet Friday, where they were formally presented their honorary Doctors of Laws.

“As Chancellor, I’m fortunate to have the chance to meet many extraordinary people, young, and not-so-young, who are taking on some of our biggest challenges as a society,” Pearson said in her remarks. “Many of them are solving problems with a greater mission in mind. They want to contribute their talents to create a healthier, more just and equitable society. Among these people, our guests of honour today stand out.”

Wells said she was thrilled to be able to recognize the three outstanding individuals.

“It has been a long time coming, but we are thrilled to finally be able to recognize, in person, our 2020 honorary degree recipients,” she said. “All have demonstrated exceptional leadership, public service and outstanding achievement in their chosen fields.”

Nash is a former NDP Member of Parliament and long-time advocate for labour, human rights, gender equality and democratic engagement. Prior to her first election in 2006, she was a senior negotiator and top advisor for Canada’s largest private-sector union, the Canadian Auto Workers.

“As someone who spent their life advocating for working people, being recognized by Brock, which has a Labour Studies department, is especially meaningful,” Nash said. “It shows Brock as a University recognizes the value of the contributions of working people.

“On a personal level, as someone from a family where we don’t come from academia, receiving this recognition is such an incredible honour and privilege.”

Rueda worked in the high-tech industry for more than a decade and was responsible for developing the first commercial fixed broadband wireless access system. She is an active member of the machine learning and artificial intelligence communities in Ontario and beyond.

“For me as an engineer, the hope is to contribute to society, so this was a very pleasant surprise,” she said. “Being an engineer, especially a female engineer, isn’t easy; there are still a lot of challenges. Getting an honorary degree like this is really appreciated.”

For more than 30 years, Zimmerman has been a political, business and community leader in Niagara and Ontario, recognized for her commitments to children, mental health, the environment, agriculture and responsible government. Zimmerman served as the first and only female chair of Niagara’s regional government and she is now the CEO of the Grape Growers of Ontario.

Zimmerman said she felt honoured to be “recognized by a university of this calibre.”

“Today with Dr. Pearson and Dr. Wells here, it was phenomenal to see these women who are such achievers in their lives, I feel honoured just to be part of that,” she said. “To the students I would say we’re here, but it’s our job to pass it on to them to take up the torch.”

The Right Honourable Paul Martin was awarded his degree at the virtual Spring 2020 ceremony and delivered the Convocation address. Martin served as Canada’s Prime Minister from 2003 to 2006 and in 2008 founded the Martin Family Initiative, a charitable organization committed to improving education, health and the overall well-being of Indigenous children and youth in Canada.

Gary Kobinger was also bestowed the honorary degree at the Spring 2020 Convocation ceremony. The former Canadian Scientist of the Year is recognized internationally for his development of an Ebola virus treatment.

Lieutenant-General, the Honorable Roméo Dallaire, is a celebrated international advocate for human rights, who was awarded the honorary degree and gave the address at the 2020 Fall Convocation ceremony. A respected author, government and United Nations advisor, and former Canadian senator, he is also founder of the Dallaire Institute for Children, Peace and Security.