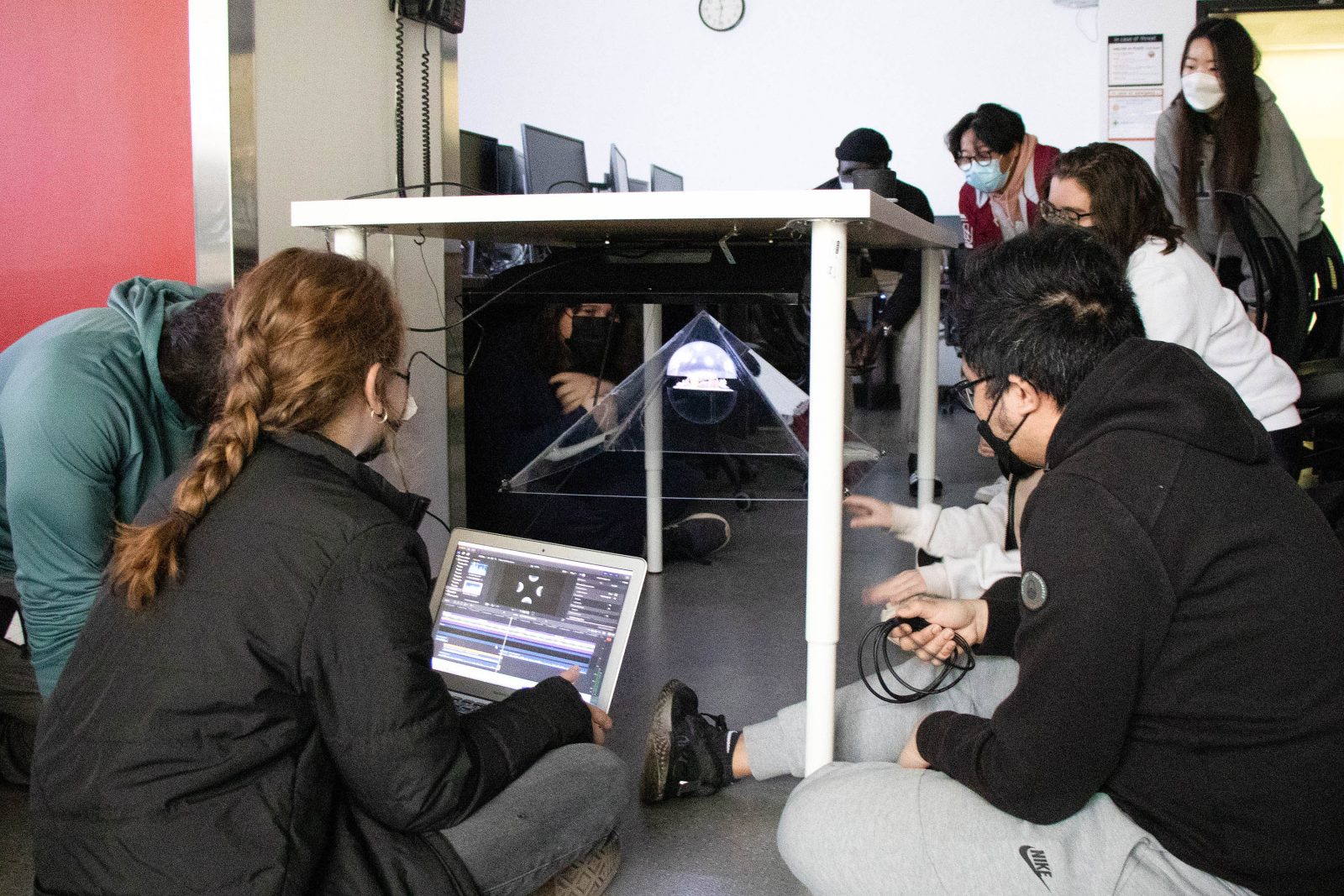 Interactive Arts and Science students make final adjustments to their hologram project, an interactive installation that is available to the Brock community in the Digital Scholarship Lab until April 26.

An endangered blue-footed booby appears suspended in mid-air, accompanied by a soundtrack and narration. The wave of a hand over a contactless sensor sees the bird disappear and brings another species into view.

It sounds like a scene from a science fiction movie, instead of a sight available in Brock’s Digital Scholarship Lab.

“We wanted to do something educational and bring awareness to the fact that we are not the only beings who share this planet,” says Tany Dourev, a student in IASC 3F02 — Interactive Media Practices, Prototyping and Production. “Installations have a lot of power to educate people, as long as you’re willing to listen and understand what is being taught.”

Students in the course explore design concepts and best practices while creating an interactive project. To tackle their assignment, the class divided into two groups, with half developing a game and the other half undertaking the hologram.

“A hologram projector sounds like science fiction, but our students are able to make all this a reality,” says Associate Professor Aaron Mauro, the course’s instructor. “Our students are building an interactive digital media object, which includes digital displays, embedded computing, open-source software and hardware, as well as additive manufacturing.”

The project, which involves building both physical and digital user interfaces, was proposed, designed and created by the students.

Building the hologram drew on many different skills, including using math and physics to build the prism and set up the projector, coding, art and sound design, 3D printing, and woodworking to create the physical hologram.

The group split up in teams to tackle the ambitious project, which expanded beyond the hologram itself to a website and print posters.

The biggest challenge was pulling all the diverse pieces together, Dourev says.

“We decided we didn’t want to make a hologram for the sake of making a hologram, but we wanted to create a real installation that people could interact with,” she says. “There are so many components and so much going on that it really has grown in a very good way.”

The students have grown as well, Dourev says, as they have spent the year developing prototypes and troubleshooting unanticipated problems to bring the hologram to life.

“I’m so proud that people took this idea and turned it into something real,” Dourev says. “Everyone embraced this project and made it their own.”

Although the class is coming to an end, the project will live on. Students have installed the completed hologram in the Brock University Library’s Digital Scholarship Lab. It will be on view there until the end of the exam period on Tuesday, April 26.