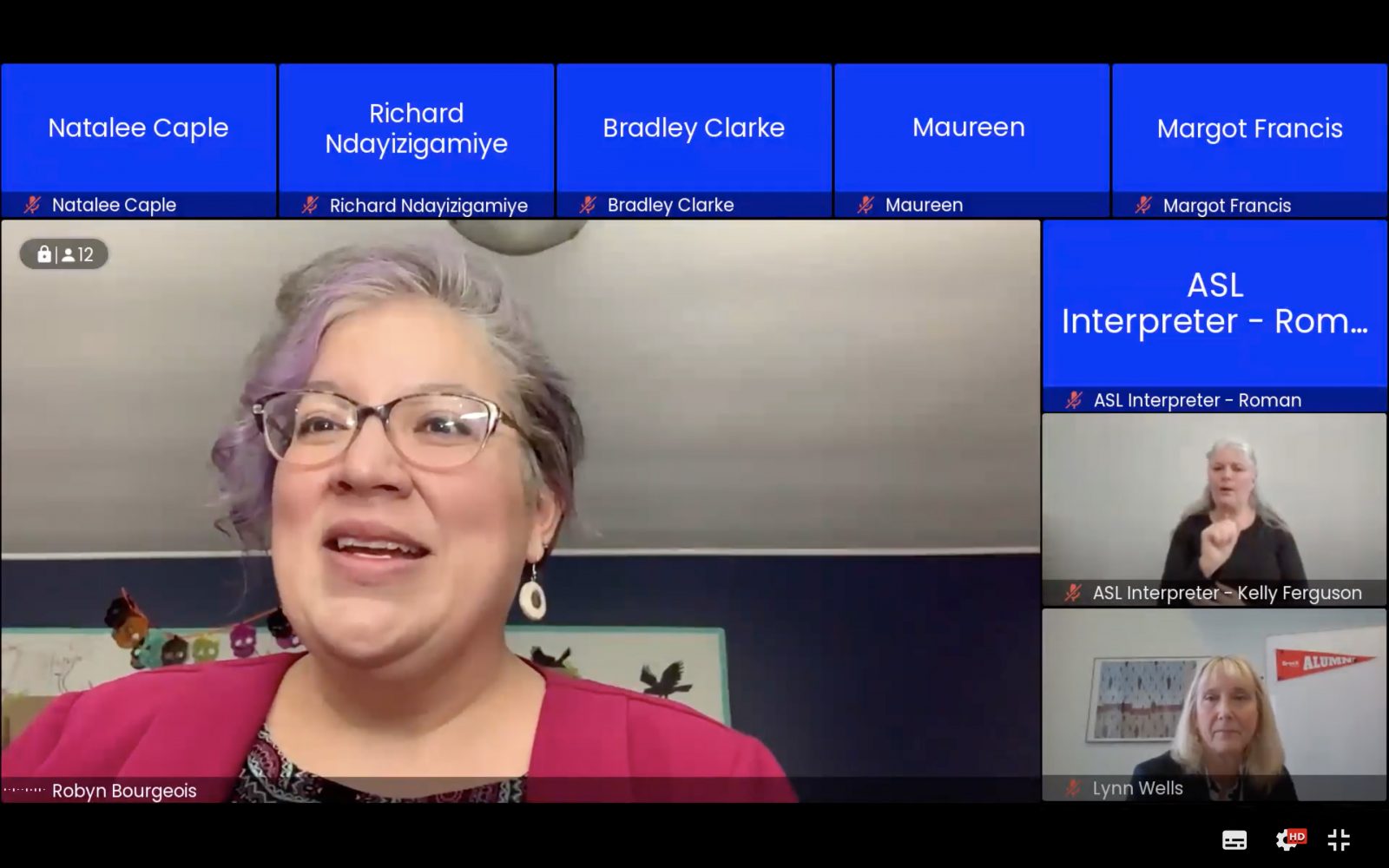 Brock University’s latest Town Hall aimed to shine light on progress that’s been made in the area of equity, diversity and inclusion while also recognizing there is more work to be done.

Wells said although Brock has made significant strides to achieve its goals, considerable challenges remain.

“I am pleased that we will be engaged in this conversation today and that we will continue our learning,” she said. “Equity, diversity and inclusion is a priority for our entire community and each of us must do our part.”

Professor Maureen Connolly, of the Anti-Ableism and Mental Health working group, spoke about the group’s efforts throughout the academic year, which included presenting workshops on universal design for learning and anti-ableism; completing process analysis of captioning, job evaluation, online proctoring and student forms; and recognizing efforts through internal accessibility awards.

“This is not an indictment. This is a call for awareness and action,” Connolly said. “We do have institutional ableism, and our starting point is to own that and to take actions to address it. There’s real awareness and willingness to do that.”

While progress has been made, Bourgeois stressed the need for further work to be done, raising awareness of a key finding of the 2021 Campus Climate Survey that found 36 per cent of Indigenous students had seriously considered leaving the University.

“A fundamental part of this problem … is that Indigenous students, staff and faculty continue to experience colonialism and anti-Indigenous racism at Brock,” she said. “It’s essential that non-Indigenous members of the Brock community, and especially our white colleagues, take a stand against such violence and work actively to decolonize and support Indigenous Peoples.”

As statistics show the majority of sexual assault victims are under the age of 30, students in university are also vulnerable, she said. Francis emphasized the need to focus on programming related to sexual violence prevention as students arrive to campus each fall.

She also highlighted some of the working group’s accomplishments, including working with a Black, Indigenous and People of Colour (BIPOC) and peer-led sexual violence prevention group; lobbying for funding for the REDress event to memorialize Indigenous women, girls, two-spirit and trans people impacted by colonial violence; and working with Human Rights and Equity and other stakeholders on offering more diverse and affordable counselling for survivors, a proposal for compulsory sexual violence education for students in residence and athletics, and a review process for the Sexual Assault and Harassment Policy.

Yates said there are concerns that all-gender washrooms are not commonly available on campus and that their locations have not been well known. To aid with this, a resource has been created that maps all-gender washrooms at Brock and additional signage is being posted. Work is also being done to identify spaces where gendered washrooms can be made all-gender.

Moving forward, the working group has identified opportunities for 2S&LGBTQ+ training for all departments on campus; revised language in institutional documents that supports a holistic expression of gender identities and sexual diversity; hiring a full-time gender and sexual diversity advocate; and including more sexually diverse authors into course content.

Professor Richard Ndayizigamiye, of the Anti-Racism working group, spoke about the need to address discriminatory policies in academia, including those focused on teaching curriculums and hiring and development practices.

He said Wells has confirmed her support for a cluster hire of 10 Black faculty members, the development of a strong employment equity policy to diversify Brock’s workforce, and the development of multi-layered promotion and retention plan of BIPOC faculty and staff.

Throughout the year, the Anti-Racism working group’s initiatives have included educational webinars on microaggressions, anti-Muslim hate and Islamophobia, and perspectives on Black mental health, and ongoing dialogue with Campus Security Services about the need for a more racially diverse security team.

The working group’s goals for next year include making the faculty and staff population more representative of the diverse student population it serves; hiring more racially diverse staff in Academic Advising and on-campus Counselling Services; and establishing an African Studies program.

Brock faculty, staff and students can become involved in PACHRED and its working groups by submitting a nomination for membership at brocku.ca/pachred

The Town Hall can be viewed in full below: