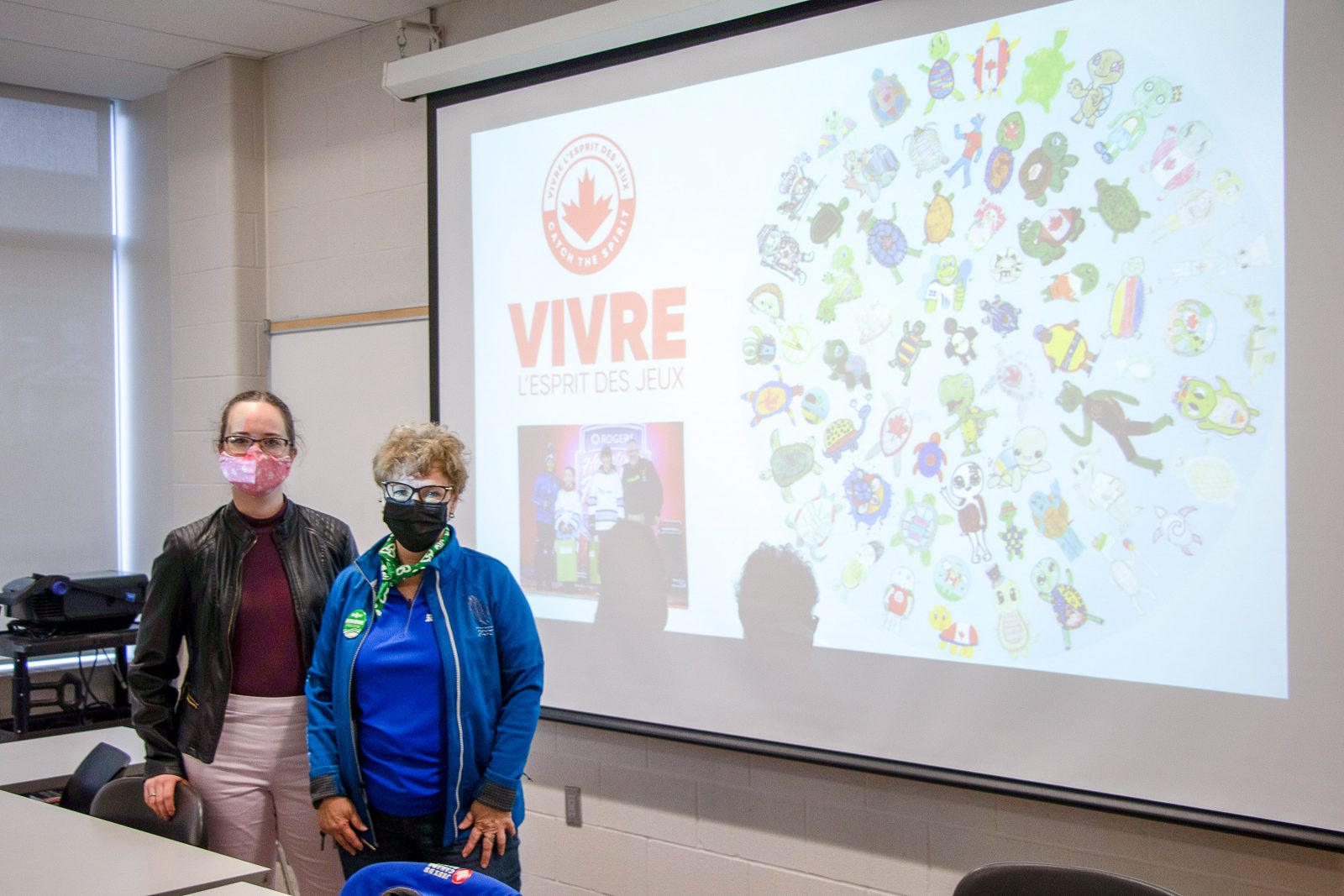 Fourth-year French student Brianna Nelson (left) has been interning this semester with Julie Johanis, Manager, Official Languages, Design and Marketing of Niagara 2022 Canada Summer Games. Nelson and Johanis recently spoke to Brock French students about the francophone work being done for the Games.

NOTE: This is the latest in a series of stories featuring faculty members who are integrating the Niagara 2022 Canada Games into the courses they teach at Brock University or the research they’re leading. For more information on Brock’s academic activities around the Games, visit brocku.ca/canada-games.

Brock’s French students have been preparing a warm bienvenue for this summer’s Canada Games attendees.

Fourth-year Concurrent Education student Brianna Nelson has been working with the Games’ Official Language Committee through the French internship course FREN 4P50. Under the guidance of Julie Johanis, Manager of Official Languages, Design and Marketing of the Niagara 2022 Canada Summer Games, Nelson has been using her communication skills to help the organization connect with Niagara’s francophone community.

“I have been working with the team to try and increase the number of bilingual volunteers we have for the Games, to ensure that everyone has the opportunity to speak in both official languages of Canada,” says Nelson.

Interacting with French speakers outside of the classroom has been an exciting opportunity for the London, Ont., native, who was surprised to learn how big and diverse Niagara’s francophone community is.

“For the most part, my French schooling has been with the standard French accent that comes from the Paris region,” says Nelson. “This year, working with the Games, I had a lot of exposure to different accents that I had never heard before. While it was difficult at the beginning to understand what everyone was saying, I would definitely say that my listening skills have gotten a lot better.”

The Canada Games has given students hands-on experience in their specialties and in professional settings, says Associate Professor Jean Ntakirutimana, who oversees the course.

“Canada Games 2022 is a good opportunity for our students to translate into practice some of the theories they acquire in the classroom,” says Ntakirutimana. “It is another way of giving back to the community, while showcasing the multiple young talents that abound in our institution.”

The Games has been a golden opportunity to incorporate experiential learning components in courses that are often seen as too theoretical, says Ntakirutimana, who has incorporated the three-week event into his FREN 4V21 Documentation and Terminology course as well.

In the course, students have been learning special vocabulary that is used when talking about Canada Games infrastructure, organization, sports equipment, athletes, coaches and other professionals. Students have been preparing to participate as volunteers at the Games by learning how to translate official documents, act as bilingual guides and broadcast bilingual announcements.

“Any teaching gets an added value when theory gets to be applied to reality and is more interesting when the reality is unfolding locally and close to home — especially when all this happens in your front yard on the University campus,” says Ntakirutimana. “It is a logical complement to the existing translation courses within the French Studies program, particularly in its newly-approved Certificate in Business French and Translation.”

While the Games are only a few months away, Nelson is also excited to put her new skills to use as she pursues a career in teaching.

“I am very thankful for the experience that working with the 2022 Canada Games has given me,” she says. “It has opened my eyes to a whole world of opportunities that I didn’t know existed.”