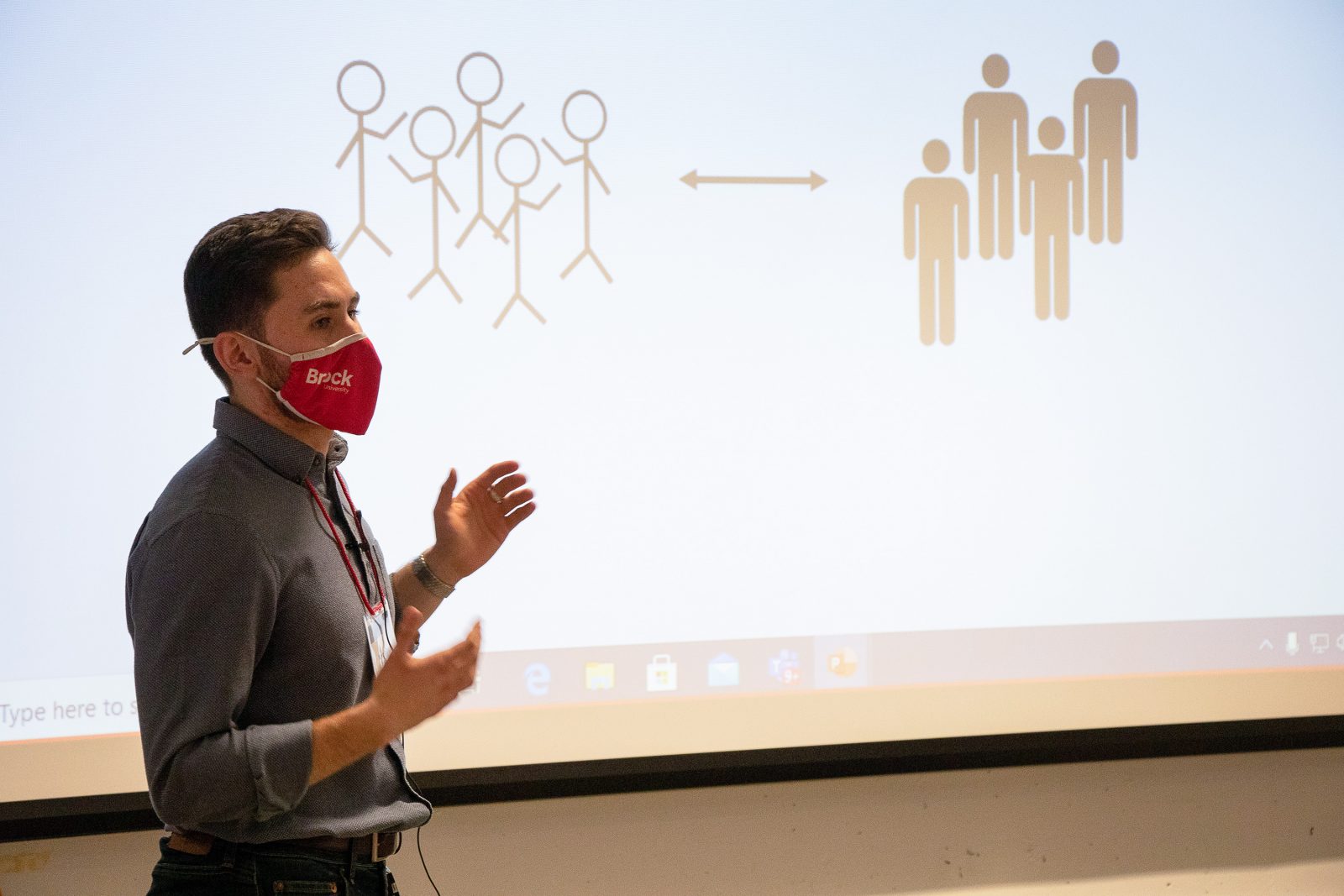 Keegan Dalal, a master’s student in Brock’s Sport Management program, presents his research at the Two Days of Canada: Canada at Play conference. The conference drew participants from around the world due to its hybrid format.

Participants from around the world recently tuned in to learn about “Canada at Play,” the theme of the annual Two Days of Canada conference hosted by Brock’s Centre for Canadian Studies.

Held at the Marilyn I. Walker School of Fine and Performing Arts on March 25 and 26, the in-person event also offered each of its sessions simultaneously online. The hybrid format drew participants from as far afield as Slovakia, Slovenia, Serbia and India as well as New Brunswick, Nova Scotia, Waterloo and Toronto.

“There was a lot of enthusiasm for the hybrid format,” said Dan Malleck, Director of the Centre for Canadian Studies and a Professor with the Faculty of Applied Health Sciences, who noted that half the participants chose to engage virtually.

“It looked like a small event, but it had a lot of planning behind it,” he said. “It was a huge effort by a lot of people, including IT support staff.”

The sport theme built on momentum around the upcoming Niagara 2022 Canada Summer Games while engaging with current scholarship on sport and fostering discussion of the role of sport in Canadian culture and identity.

“We had great discussions about diversity in sport,” Malleck said. “The point was to complicate the myth of Canadian sport and I think we were successful.”

Conference panels explored issues of diversity in sports, power dynamics, and inclusion and exclusion. The theme brought together scholars from a wide range of disciplines in Humanities, Social Sciences and Applied Health Sciences.

The event featured a screening of Keepers of the Game, a 2016 documentary on women’s lacrosse, at the Film House in the FirstOntario Performing Arts Centre. The screening was followed by a moderated panel discussion.

“Having three young Indigenous women lacrosse players talking about their experiences was a highlight,” Malleck said.

Courtney Szto, Assistant Professor of Kinesiology and Health Studies at Queen’s University, gave the conference’s keynote address, speaking on “Playing Through Pain: Racism, Sport, and Canadian Mythologies of Multiculturalism.” Her talk explored what it is like to be a racialized participant in Canada’s hockey scene and how sport can create anti-racist and anti-colonial spaces.

“We did our best to make it a great event for participants because we knew it was going to be a lot of people’s first conference in two years, and for some students, their first conference ever,” Malleck said. “It was a great way to build on some of the momentum around the Canada Games and also on the important scholarship being done around sport.”

The conference was organized by the Centre for Canadian Studies with support from the Faculty of Humanities, Faculty of Applied Health Sciences, Faculty of Graduate Studies, Humanities Research Institute, Social Justice Research Institute, Alumni Relations, Recruitment, Brock University Printing Services, and the Council for Research in the Social Sciences. The FirstOntario Performing Arts Centre and the Canadian Sport Film Festival assisted with the film screening.