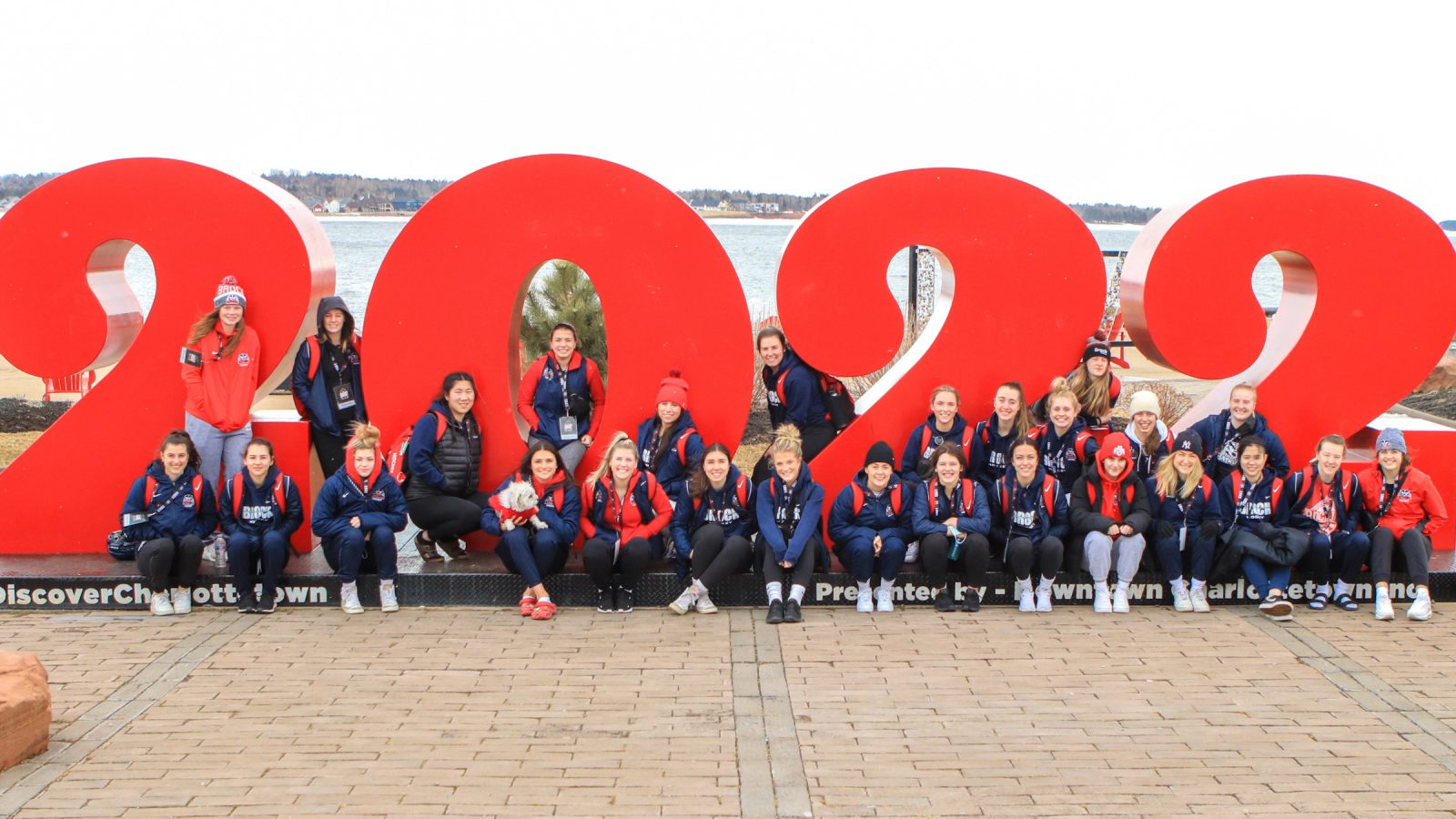 The Brock women’s hockey team poses by a 2022 sign while at the U SPORTS Women’s Hockey Championships in Charlottetown, PEI on Tuesday, March 22.

It’s a good year to be a Brock Badger.

Brock University student-athletes have emerged from the COVID-19 pandemic with an unprecedented surge of success on the field, court and ice since having the 2020-21 season cancelled, putting together the best sport season in school history.

The Brock women’s volleyball and women’s hockey teams each captured their first Ontario University Athletics (OUA) championship titles on Saturday, March 19 and are competing in the  U SPORTS National Championships beginning this week.

The women’s volleyball team will open its second trip to the championships in the quarter-final versus the No. 7 Mount Royal Cougars on Friday, March 25 at 3 p.m. (all times EST).

The women’s hockey team enters the championships for the first time in program history and will face off against the No. 5 Saskatchewan Huskies on Friday, March 25 at 2 p.m. Saskatchewan lost to the UBC Thunderbirds in the Canada West championship game.

Meanwhile, the Brock track and field and swimming teams each qualified one student-athlete for their national championships. Hurdler Colton Spencer of the men’s track team will represent Brock in Saint John, NB and swimmer Anthonie Korstanje is set to make a splash for the Badgers in Laval, QC.

Brock Interim President Lynn Wells said she has been following along with the various teams’ progress and is excited to see what happens in the coming days.

“Athletics and recreation are an important part of the student experience, whether that be as a student-athlete or as a casual fan,” said Wells. “We’re so incredibly proud of how all of our varsity student-athletes and teams have done this year and how they continue to represent Brock University so well. Go Badgers!”

On Wednesday, March 23, three more Brock teams have a chance to secure a place in their respective U SPORTS championships.

The Brock men’s and women’s basketball teams are hosting a playoff doubleheader as each is playing OUA semifinal games at Bob Davis Gymnasium.

In Toronto, the Brock men’s hockey team faces off against the Rams in the OUA semifinal at Mattamy Athletic Centre at 6 p.m. Brock is organizing a student fan bus to send to the game.

Several championship scenarios could play out on Wednesday evening.

If the women’s basketball team wins, it will host the OUA Women’s Basketball Championship, the Critelli Cup, at Bob Davis Gymnasium on Saturday, March 26.

For men’s hockey, a victory over the Rams means Brock will host the provincial championship, the Queen’s Cup, on Saturday, March 26 at Seymour-Hannah Arena. If they lose, the Badgers host the bronze-medal game where the winner will earn a berth to the U SPORTS Men’s Hockey Championships in Wolfville, Nova Scotia.

The path for men’s basketball to reach their provincials, the Wilson Cup on Saturday, is a little more complicated with four teams in the running:

The two teams who make the semifinal will qualify for the U SPORTS national championships in Edmonton, while a wild card spot is also up for grabs.

Further, Brock’s success has been recognized on the national stage. A total of seven Brock teams earned spots among the national U SPORTS Top 10 Weekly rankings this season.

The accolades come on the heels of Brock’s fall sports teams as the Brock men’s lacrosse team captured its first Baggataway Cup in 12 years and 19th title in school history while the Brock men’s rowing team won nine medals to claim its first OUA title in four years.

“Our Brock Badgers student-athletes continue to raise the bar and show the type of success that dedication and hard work can lead to,” said Brock Sports Director Melissa Krist. “We strive to demonstrate that a culture of family, inclusivity, diversity, commitment and resilience are ingredients to build not only successful athletic programs but most importantly, achieve the human development of well-rounded people for our future.”