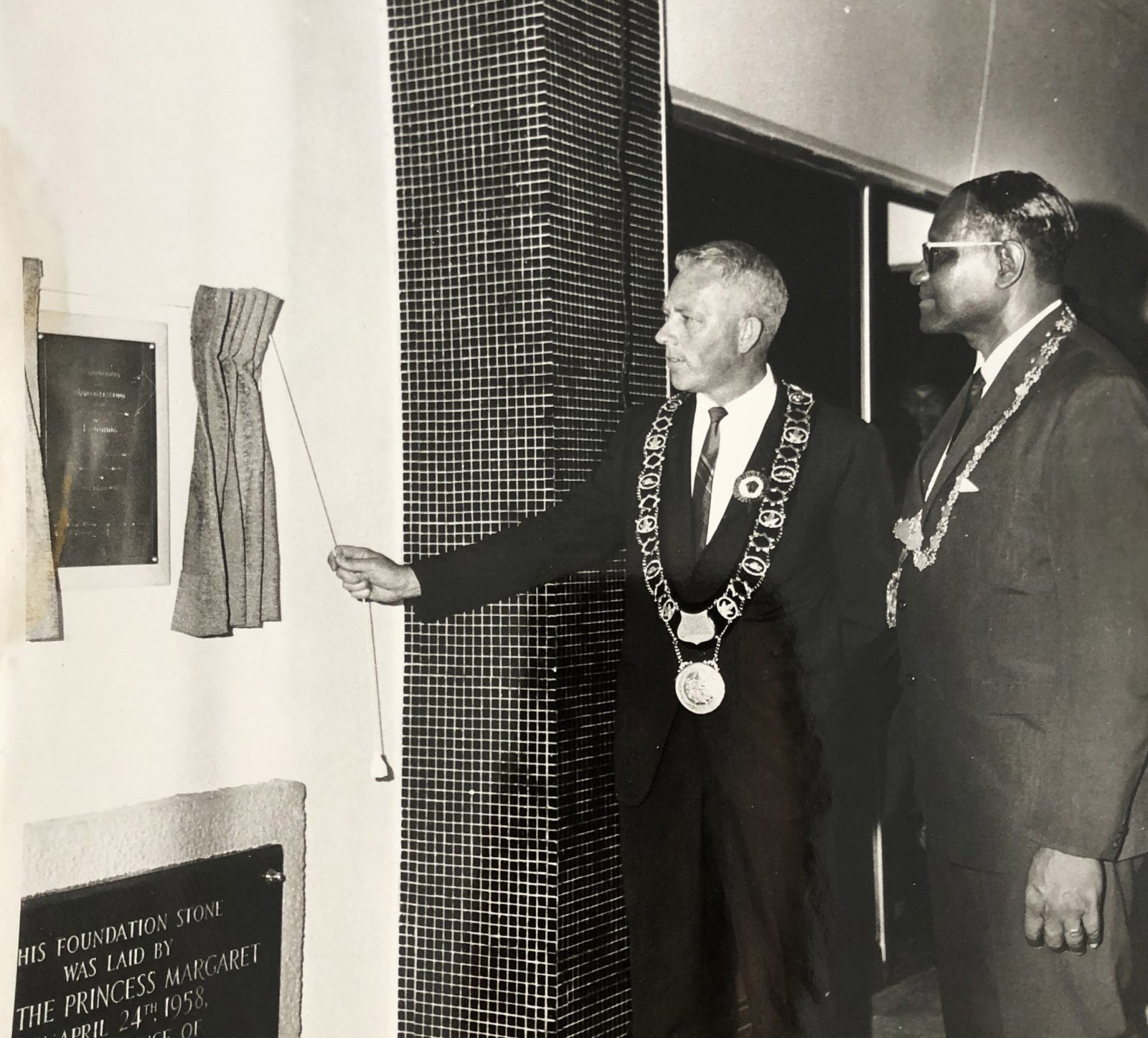 Former St. Catharines Mayor Mackenzie A. Chown and Port of Spain Mayor J. Hamilton-Holder unveil a commemorative plaque for the twinning of their respective cities on the wall at Port of Spain's City Hall on Sept. 30, 1968.

Although the connection between Brock University and Trinidad and Tobago was established decades ago, it continues to help students further their education today.

In 1968, Port of Spain — the capital city of the Caribbean nation — was officially recognized as the twin city of St. Catharines, with both municipalities sharing many similarities.

Brock University has since worked alongside the St. Catharines and Regional Niagara Twinning Association and the Port of Spain Twinning Association to support and enhance students’ learning experiences by awarding annual full-tuition scholarships for select students from Trinidad.

Applications are now being accepted from international students for the Caribbean International Scholarship, as well as other awards for which details can be found through Brock’s website.

Over the years, the St. Catharines and Regional Niagara Twinning Association has also contributed by supporting a bursary fund at Brock that benefits students from Trinidad and Tobago.

“The City of St. Catharines is proud of our long-standing partnership with Port of Spain, which has allowed us to learn and celebrate our cultures, history and identities. I think this relationship has made both of our communities stronger,” St. Catharines Mayor Walter Sendzik said. “The connection between Brock and the Twinning Association has been an important part of that — enabling students to chase their dreams through post-secondary education.”

The origin of twinning started in 1965 when Philip Atteck, a Trinidadian, visited St. Catharines while on a promotional tour for Air Canada.

During his visit, he met and established connections with Larry Heywood, former manager of 610 AM radio, and Bill Burgoyne, then owner of CKTB radio and the St. Catharines Standard newspaper.

As a result of Philip’s newfound connections, he was invited to a luncheon with prominent members of the community, which enabled him to speak about Trinidad and Tobago with city councillors, the media, radio stations, police and fire departments, Chamber of Commerce representatives, several service clubs and many local businesses.

“The evening was a success. The result was a motorcade around St. Catharines to show Phil the city,“ said Helen Atteck, Philip’s wife.

The tour of the city brought the stark similarities between St. Catharines and Port of Spain to Philip’s attention. At the time, the port cities each had a population of 120,000 citizens, were surrounded by agriculture, had active chapters from the same service clubs, radio stations that operated on the same frequency and were home to a local university.

“During that drive, the idea for joining St. Catharines and Port of Spain as Twin Cities was formed,” Helen said, adding the ‘twinning’ became official about three years later. “At that time, sister-city relationships were being promoted by the United Nations as a means of creating friendships and understanding between diverse peoples in the world.”

Each September, the St. Catharines and Regional Niagara Twinning Association invites all current Brock students from Trinidad and Tobago to a luncheon, giving students the opportunity to socialize as school begins and welcoming them as part of the University community.

Past scholarship recipient Anna Hudlin (BBA ’18) says the experience has had a lasting impact on her life.

“My affiliation to Trinidad and the award allowed me to gain a community of ‘aunties and uncles’ from the St. Catharines and Regional Niagara Twinning Association who supported me during my transition to life in Canada and Brock. They are still an important part of my life today,” she said. “They created a friendly space for all students from Trinidad to connect by hosting a luncheon each fall. I’ve made amazing friends through this networking opportunity.”