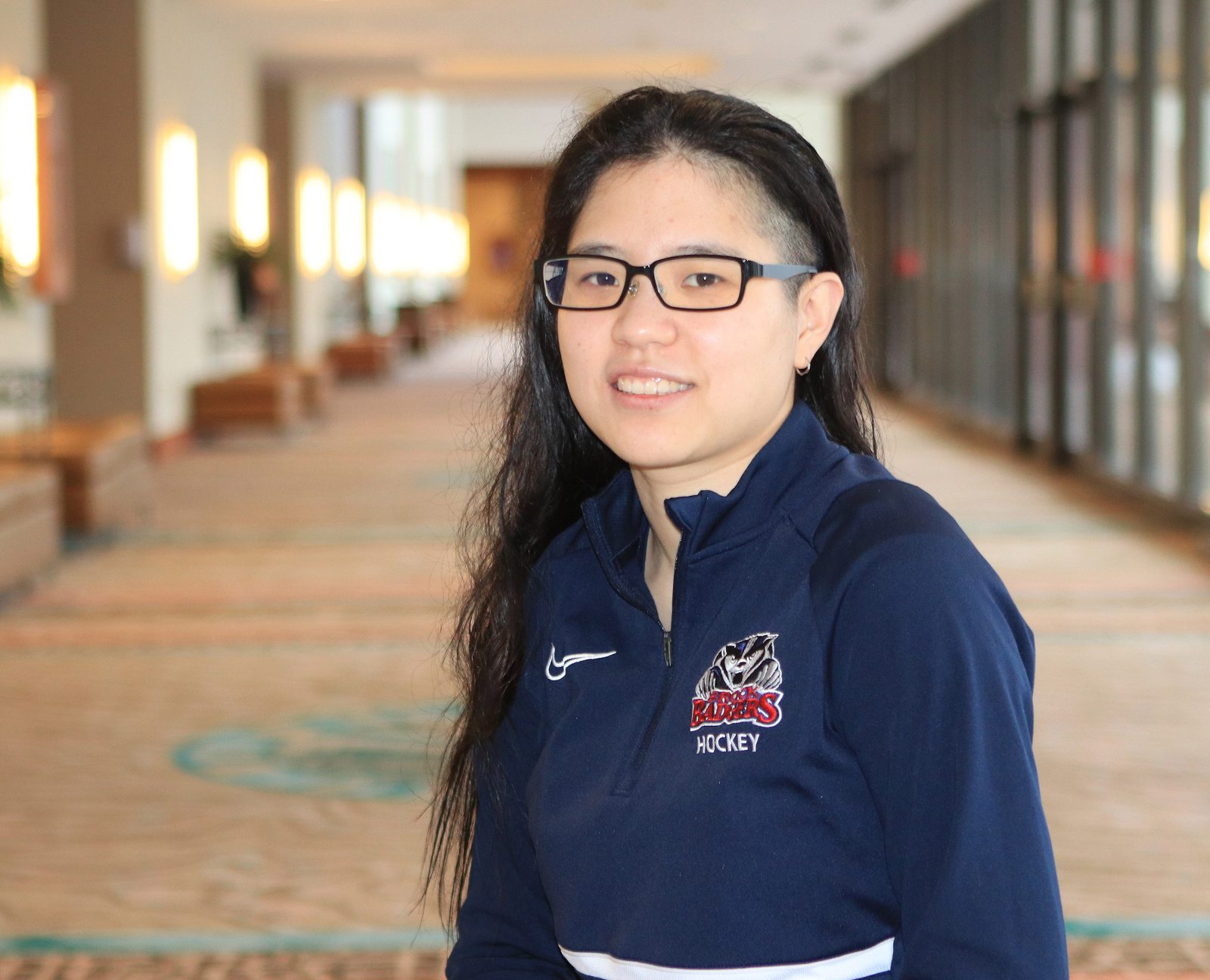 Brock Badgers goaltender Tiffany Hsu is back in Charlottetown 11 years after visiting from Taiwan for a hockey showcase event.

In the long and storied career of Brock Badgers women’s hockey head coach Margot Page, she can never remember having a player on the roster who was balancing playing hockey with the academic challenge of working toward a PhD.

But then again, goaltender Tiffany Hsu is no typical player.

This week, Hsu and her Brock Badgers teammates are in Prince Edward Island to compete in the U SPORTS Women’s Hockey Championships against the other seven strongest teams in the country. Brock, which opens competition Friday afternoon against Saskatchewan, comes into the tournament as the Ontario University Athletics (OUA) champions, partially thanks to the goaltending heroics of Hsu in the title game against Nipissing last weekend.

For Hsu, being back in Charlottetown is a full-circle moment in a remarkable career of both athletics and academics.

Eleven years ago, a 15-year-old Hsu arrived in Prince Edward Island from her native Taiwan for what was meant to be a weeklong hockey showcase.

She had just graduated from middle school and came to the scouting event on the recommendation of her hockey coach back home, a Canadian who saw her as a talented goalie with a big future ahead of her.

Eight private high schools recruited her, so she left her family and settled on Standstead College along the Canada/U.S. border in Standstead, Que.

“I came here around July and then made the decision to come to Canada for high school in September. So, in that two-month period, my life just completely changed,” said Hsu.

Academics have always been a priority for her. After graduating from Standstead, she was accepted to the Mechanical Engineering program at Rochester Institute of Technology, where she spent six years getting both an undergraduate and master’s degree. 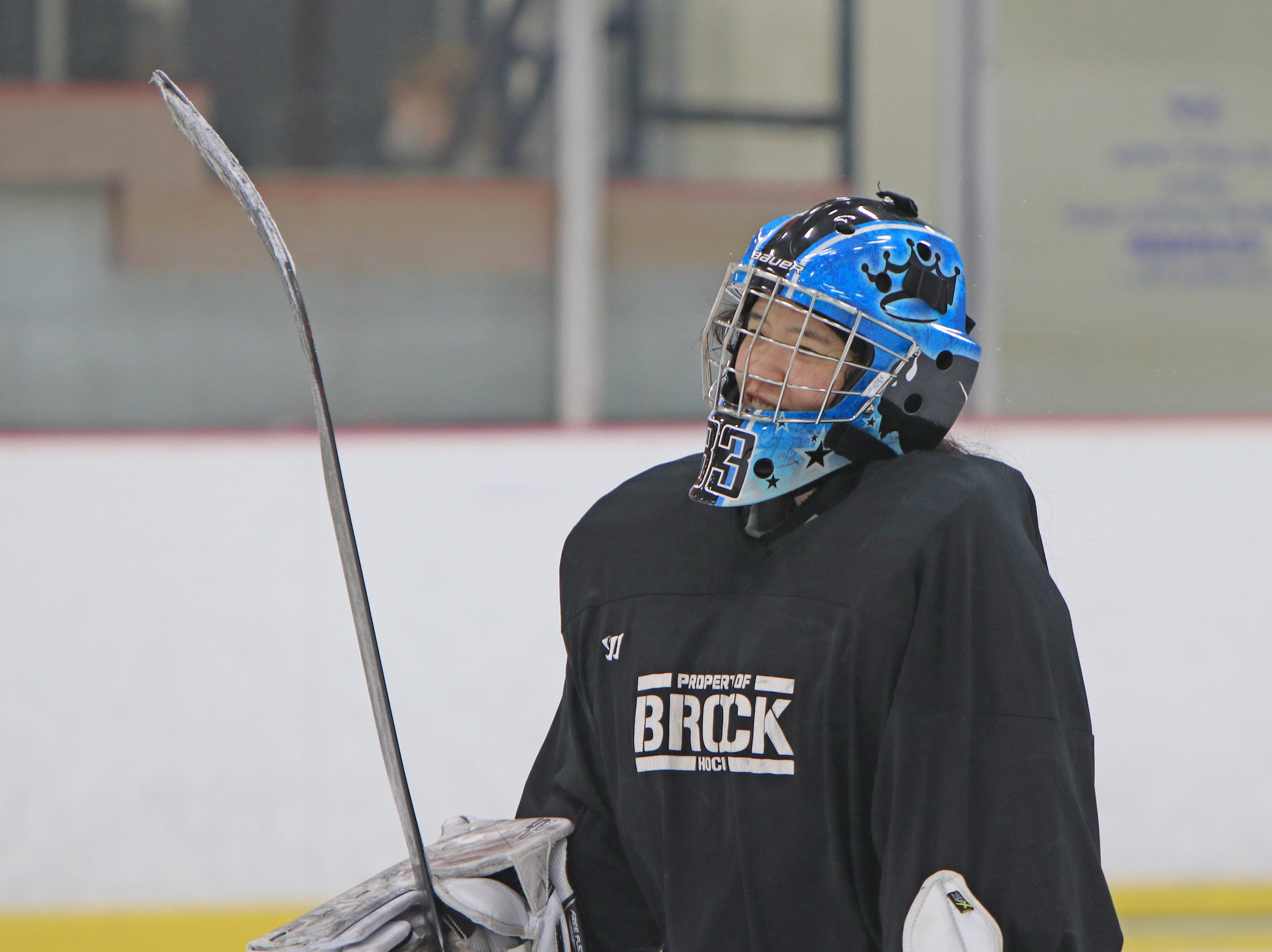 Brock Badgers goaltender Tiffany Hsu smiles at her teammates during a practice at UPEI’s Maclauchlan Arena in Charlottetown Wednesday, March 23.

Though she didn’t play for the RIT hockey team, Hsu joined the upstart Taiwan national women’s hockey team in 2014, and has been part of that squad ever since, competing at tournaments around the world.

Now 26, she is the oldest member of a national team that is made up of players as young as 16. But she continues to prove her worth, and will have less than 72 hours between arriving back home from the U SPORTS nationals and leaving for the IIHF Women’s World Championship Division II in Spain. Between her time at RIT and joining Brock this year, she also spent a year playing professionally for the Buffalo Beauts of what was formerly known as the National Women’s Hockey League.

Hsu is a master of time management. Much of her free time in Charlottetown is spent working on academic assignments rather than checking out the historic east coast city.

“Most of the stress is trying to figure out how it’s going to work with school because I’m missing a whole month,” she said. “Thankfully all of my professors and supervisors are super supportive of me playing hockey.”

Hsu’s supervisor in her PhD work researching how sport equipment impacts athletic performance is Professor of Kinesiology Kelly Lockwood, who calls her “an extremely dedicated student-athlete.”

“She has successfully aligned academic pursuits and athletic passions,” Lockwood said. “Academics and athletics support and work through each other — healthy body, healthy mind.”

Page said Hsu brings a high level of maturity to the Badgers.

“She brings a tonne of potential and you can see her growth this year,” Page said. “Her experience in life, too, is huge being from another country and always looking for places to play in order to get better.”

Far from feeling overwhelmed by the dual student-athlete role, Hsu considers herself fortunate.

“I just got really lucky that I got to merge the two things I love the most — academics and the sport I love — and am able to make a career out of it,” said Hsu, who hopes to land a career designing sports equipment or working in the athletic performance assessment space.

Playing at Brock while working on her PhD is a chance to both learn and have fun playing the game.

“In pro hockey, it’s your job and it’s for entertainment so there’s stress on top of it because you want to perform well to get the next contract,” she said. “The national team is a different kind of stress because you’re there representing your country.

“With university hockey, it’s a group of people you see every day and you have fun with. It’s a completely different environment,” said Hsu. “My plan is to stay with Brock as long as they’ll have me.”