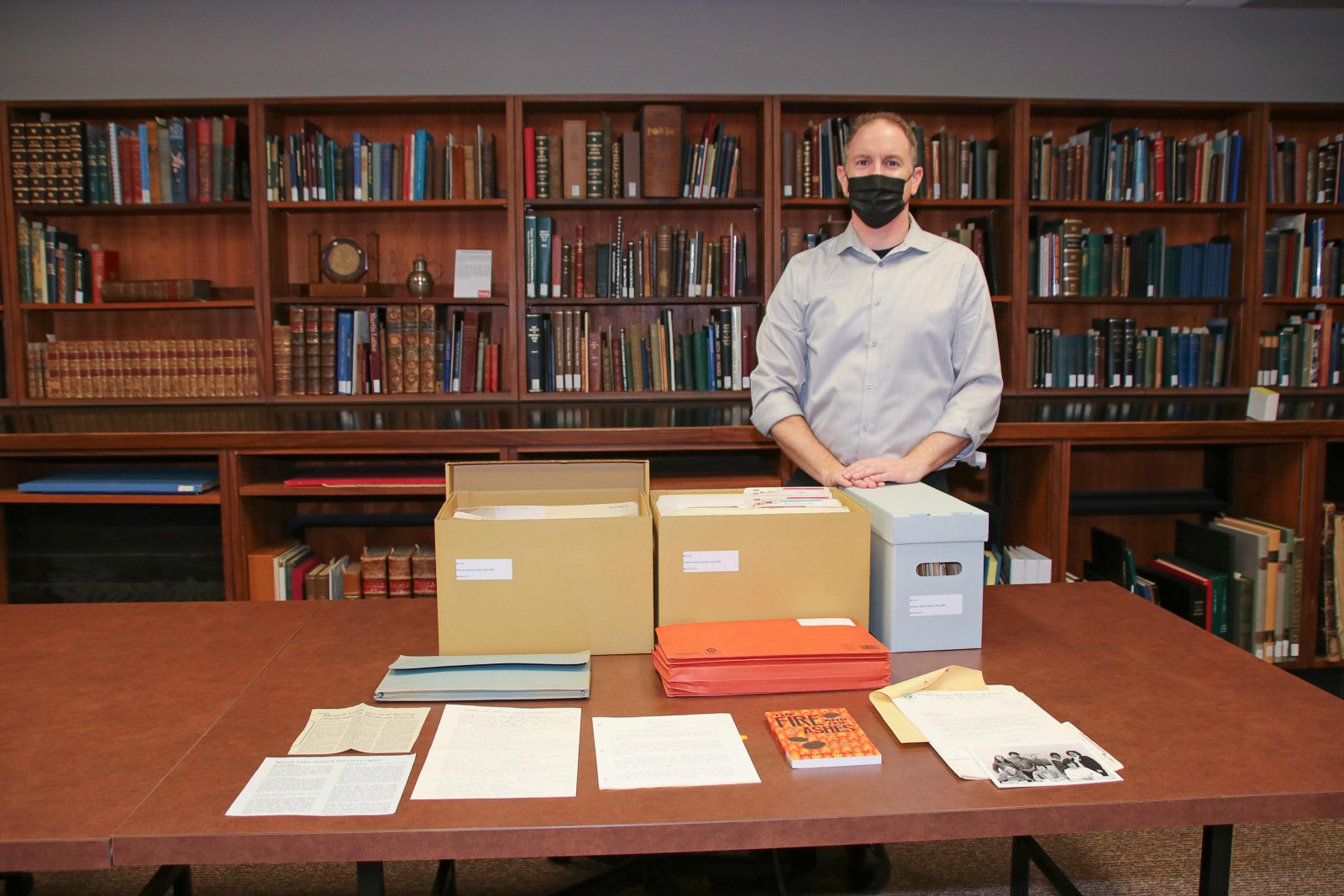 David Sharron, head of Brock’s Archives and Special Collections, with components of the Andrew Jackson fonds, which provides scholars with extensive documentation of the activities of the Canadian Labour Congress during Jackson’s 25-year tenure there.

Brock’s Archives and Special Collections is now home to the papers of Andrew Jackson, former Chief Economist and Director of Social and Economic Policy at the Canadian Labour Congress (CLC).

The 30 boxes that make up the Andrew Jackson fonds include material acquired and created by Jackson during his time with the CLC between 1989 and 2012, a period that saw the introduction of the Goods and Services Tax, the North American Free Trade Agreement and other significant changes to policy around pensions and unemployment insurance in Canada.

“When the Canadian Labour Congress moved offices a number of years ago, there was a real concern that many of its archival materials would be relegated to the literal landfill of history,” says Professor Larry Savage in Brock’s Department of Labour Studies. “In an effort to make sure labour history was preserved, I reached out to Andrew about the possibility of housing his papers and related materials at Brock.”

Jackson says he was delighted when Savage approached him with the suggestion.

“Public archives have limited resources to process collections, and labour documents and records are hard to place,” says Jackson. “Brock has a great Labour Studies program and the archives are an important resource for both faculty and students.”

Head of Archives and Special Collections David Sharron says he looks forward to welcoming scholars interested in the collection, which he describes as important for Niagara and beyond.

“The records have several ties to the Niagara community, as Andrew Jackson spent his formative teenage years living in St. Catharines where his father, John Jackson, was the first head of the Geography Department at Brock,” says Sharron. “The Canadian labour movement has a long history in the Niagara region, which is reflected here and in other parts of the Archives.”

Sharron notes the fonds also contains numerous records relating to Shirley Carr of Niagara Falls, who was the first woman to head the CLC from 1985 to 1992.

Other key issues documented in the collection include social and economic policy, the rights of marginalized groups and the Canadian Constitution.

“The role of the labour movement in politics and policy-making is generally underestimated, whether it’s lobbying or political action through party politics or through collective bargaining,” says Jackson. “For example, the labour movement was quite involved in the Charlottetown Accord — CLC staff were seconded to work in that campaign and Brian Mulroney was frequently in touch with Bob White, then the president of the CLC.”

Jackson says his recent book, The Fire and The Ashes: Rekindling Democratic Socialism, also part of the collection, may serve as a good point of entry to the fonds.

“In the book, I draw on some material that’s not readily available but will be found in those archives, such as chats around labour and economic policy-making or positions taken by the CLC,” Jackson says.

Savage agrees that the collection will be of great interest to scholars examining the labour movement’s role in Canadian public policy.

“The Andrew Jackson papers are a very valuable resource for students and researchers interested in questions of work and labour in Canada,” says Savage. “Many undergraduate essays and MA theses could be written using the primary documents contained in the collection.”