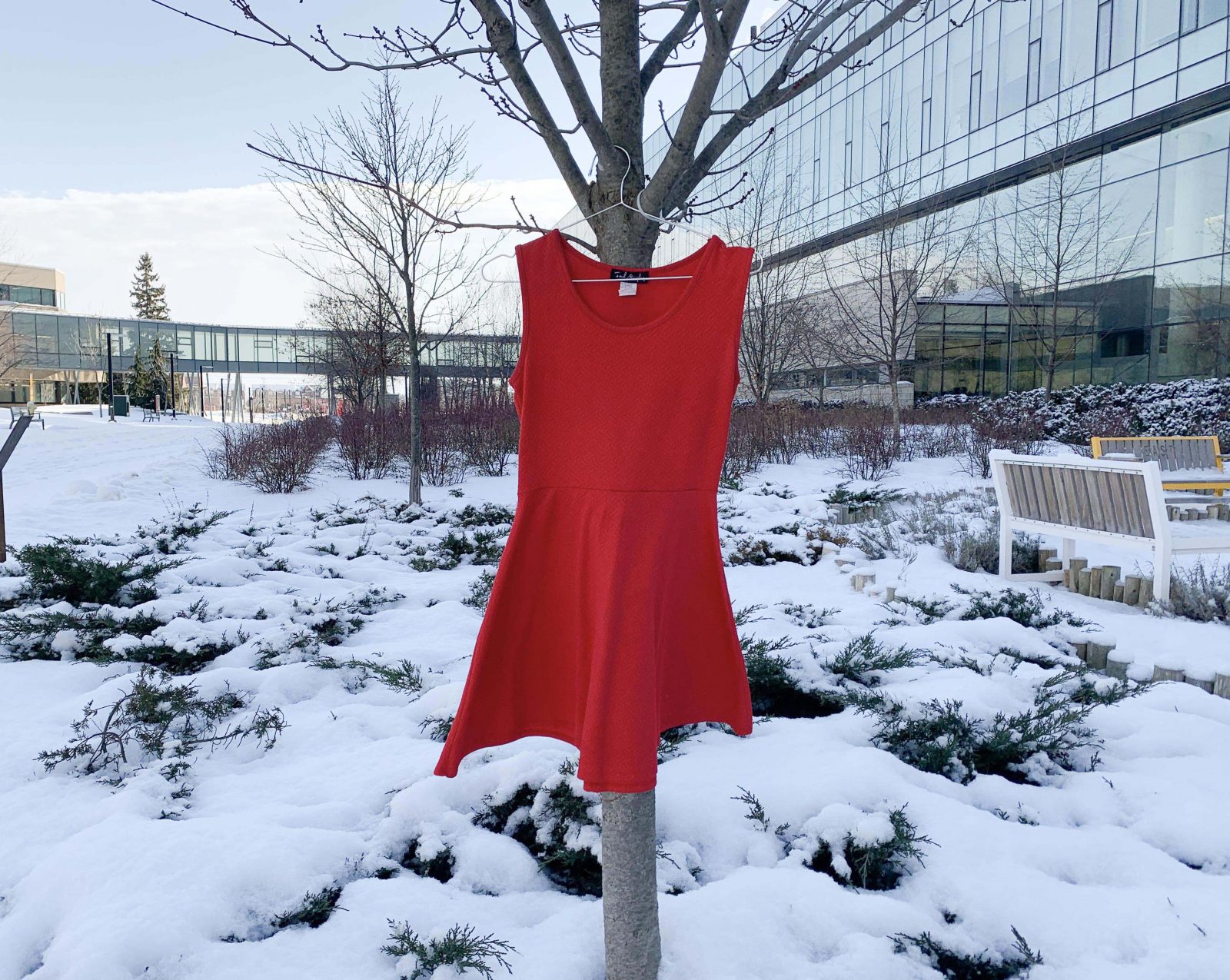 Red dresses will be displayed throughout the campuses of Brock University and Niagara College from Monday, Feb. 14 to Sunday, Feb. 20 to signify the loss of thousands of Indigenous women, girls, and two-spirit, lesbian, gay, trans, bisexual, queer, questioning, intersex and asexual people over the past 40 years to colonial violence.

Red dresses will be hung throughout the campuses of Brock University and Niagara College next week to remember missing and murdered Indigenous women, girls and two-spirit people.

The REDress Project, an annual initiative that sees red clothing displayed in public spaces, began as an art installation by Métis artist Jamie Black at the University of Winnipeg in 2011. It has since been replicated in communities across Canada, including at Brock University and Niagara College in recent years.

The empty red dresses are meant to signify the loss of thousands of Indigenous women, girls and two-spirit, lesbian, gay, trans, bisexual, queer, questioning, intersex and asexual (2SLGTBQQIA) people over the past 40 years to colonial violence.

Robyn Bourgeois, Brock’s Acting Vice-Provost, Indigenous Engagement, and a team of volunteers will hang the dresses throughout the University’s main campus on Sunday, Feb. 13, where they will remain on display for the next week.

A display of dresses from the Dramatic Arts wardrobe department at Brock’s Marilyn I. Walker School of Fine and Performing Arts (MIWSFPA) will also be set up at the downtown arts school as well as the FirstOntario Performing Arts Centre (PAC) on St. Paul St. The MIWSFPA is partnering with the PAC on the initiative, sending seven red dresses that will be used by PAC staff to create a display in the Performing Arts Centre’s first-floor windows.

Bourgeois said hanging the dresses on Brock’s main campus will be a very personal experience.

“As someone who narrowly survived this violence, it’s excruciating to see these dresses hanging on campus,” she said. “It’s a painful reminder of how many Indigenous women, girls and 2SLGBTQQIA people have been stolen from our communities. At the same time, I feel hope, because there was a time in the last 20 years when few people outside of Indigenous communities were aware of missing and murdered Indigenous women and girls.

“This annual event is the Brock community’s collective acknowledgment and commitment to addressing this violence. That’s significant.”

In addition to encouraging people to hang red dresses where they can, Bourgeois and Brock’s Aboriginal Student Services team are also inviting the community to a virtual event Monday, Feb. 14 at 6:30 p.m. on Microsoft Teams.

The panel discussion will include Bourgeois and Jennifer Moore Rattray, who served as Executive Director of the National Inquiry into Missing and Murdered Indigenous Women and Girls, which delivered a final report and 231 Calls for Justice to the Prime Minister and Premiers in June 2019.

There is no admission charge for the event, which requires advanced registration through Eventbrite, but donations will be accepted for Abbey House, a residence for Indigenous women who are experiencing crisis in their lives.

Bourgeois said the panel will highlight the ongoing nature of the REDress initiative.

“Indigenous women, girls and 2SLGBTQQIA people continue to disappear and be murdered across this country,” she said. “Until this ends, we need to continue to demand justice and fight for our lives. The more people who are aware of this violence, the more likely it is that meaningful social change will happen.”

Also in conjunction with REDress Day, Brock’s Schmon Tower will join Niagara Falls and be illuminated in red on the night of Monday, Feb. 14. Red dress earrings and keychains will also be available for sale in Brock’s Campus Store, with all proceeds going to Aboriginal Student Services.

“It’s only by shining a light and providing information that we can take steps to expose the truth of the violence,” she said. “That’s why we feel it’s so important to educate our students and staff about the violence perpetrated against Indigenous women, girls and 2SLGBTQQIA+ people, in the hope of eliminating it.

“As post-secondary providers in Niagara, we are proud to stand with our partners at Brock and take a lead role in informing our communities to end the violence, and work towards a more diverse and inclusive future for all.”

Bourgeois hopes that as non-Indigenous community members take in the displays and the virtual event, they will keep their Indigenous friends in mind and commit to working as allies going forward.

“First, realize that most Indigenous women and girls you know have likely experienced some form — and likely multiple forms — of violence,” she said. “Believe them, acknowledge their trauma and hold space for them.

“While Indigenous women and girls have been at the forefront of efforts to address this violence, we need non-Indigenous allies who will stand with us. We don’t need rescuing — we are strong and resilient. What we need are non-Indigenous folks willing to work with us to demand justice and end this violence.”

Further information about the REDress project and registration details for the Feb. 14 virtual panel are available on Brock’s REDress website.