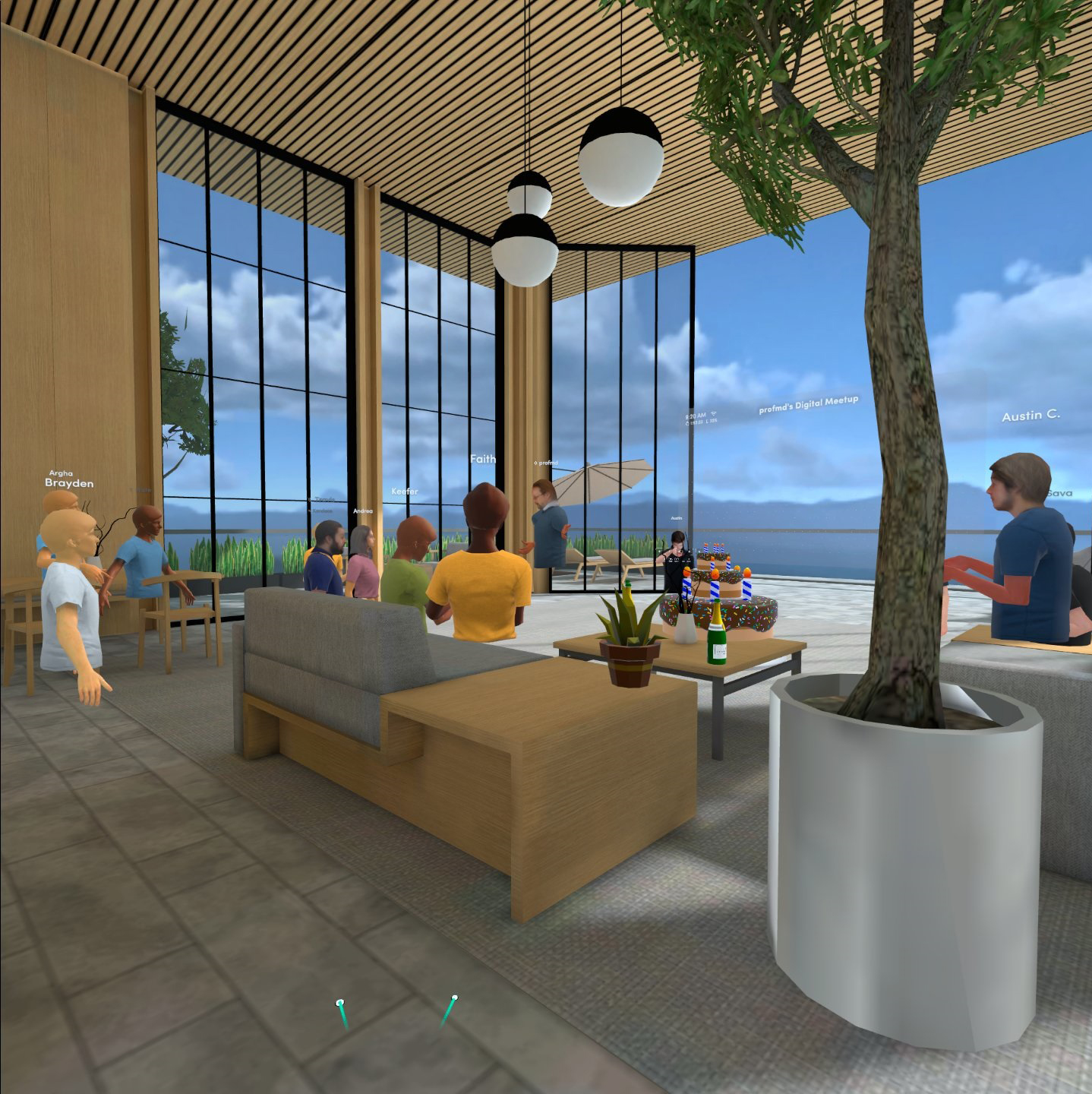 Brock University students in WRDS/IASC/GAME 3P15 Writing for New Media are attending their classes in a 3D classroom. The course, run for the first time in virtual reality by Martin Danahay, Professor with the Department of English Language and Literature, has students representing themselves with avatars in the virtual space.

Martin Danahay is taking his online teaching approach to a new level.

The Brock University Professor in the Department of English Language and Literature is hosting one of his Winter Term courses in a 3D classroom using virtual reality (VR) technology.

The class, WRDS/IASC/GAME 3P15 Writing for New Media, is part of Danahay’s ongoing work to introduce VR components into teaching.

In 2018, he received a Chancellor’s Chair for Teaching Excellence award, which provided him funding to virtually bring together five students for a class using Oculus Quest headsets.

That concept was further expanded when the Writing for New Media course began last month. All 20 students have headsets and class is conducted entirely in 3D spaces.

A Social Sciences and Humanities Research Council (SSHRC) Partnership Engage grant received by Danahay with collaborator Tim Dun, Associate Professor of Communication, Popular Culture and Film, allowed the headsets to be purchased and for local software company XpertVR to be hired as part of the project.

Danahay worked with XpertVR to create a realistic classroom and avatars. Students are able to speak and move around the 3D space using avatars as a ‘virtual body.’

“The students have really liked it,” Danahay says of the VR environment. “They preferred meeting in 3D to videoconferencing. They had a much stronger sense of connection to the people they were talking to, even though they were communicating through avatars.”

As the course got underway, students began to play around with their avatars, representing themselves as various objects, such as a stick of butter and characters from film, Danahay says.

“Students really liked the playful aspect of it, and it didn’t interfere with their interactions or learning,” he says.

XpertVR went on to develop three different virtual reality settings for the class, including the surface of Mars, a boardroom and a play space.

Third-year Interactive Arts and Science student Maddy Kwan is a research assistant for Danahay and is helping students with technical aspects of using VR during the course.

“It’s very interesting to see how far the technology has come,” she says. “This is a glimpse of what the future could look like and how virtual reality can be used in a practical setting.”

The ongoing work also includes a research component. Working with Dun, Danahay will have students complete surveys around their sense of engagement in the VR space.

“I usually run a conversation with students in a classroom, and the atmosphere of the classroom is very important to make students feel comfortable and express their ideas,” Danahay says. “3D is the future of a lot of interactions in virtual reality, so I’m interested in which factors help us create a sense of engagement and community for education.”