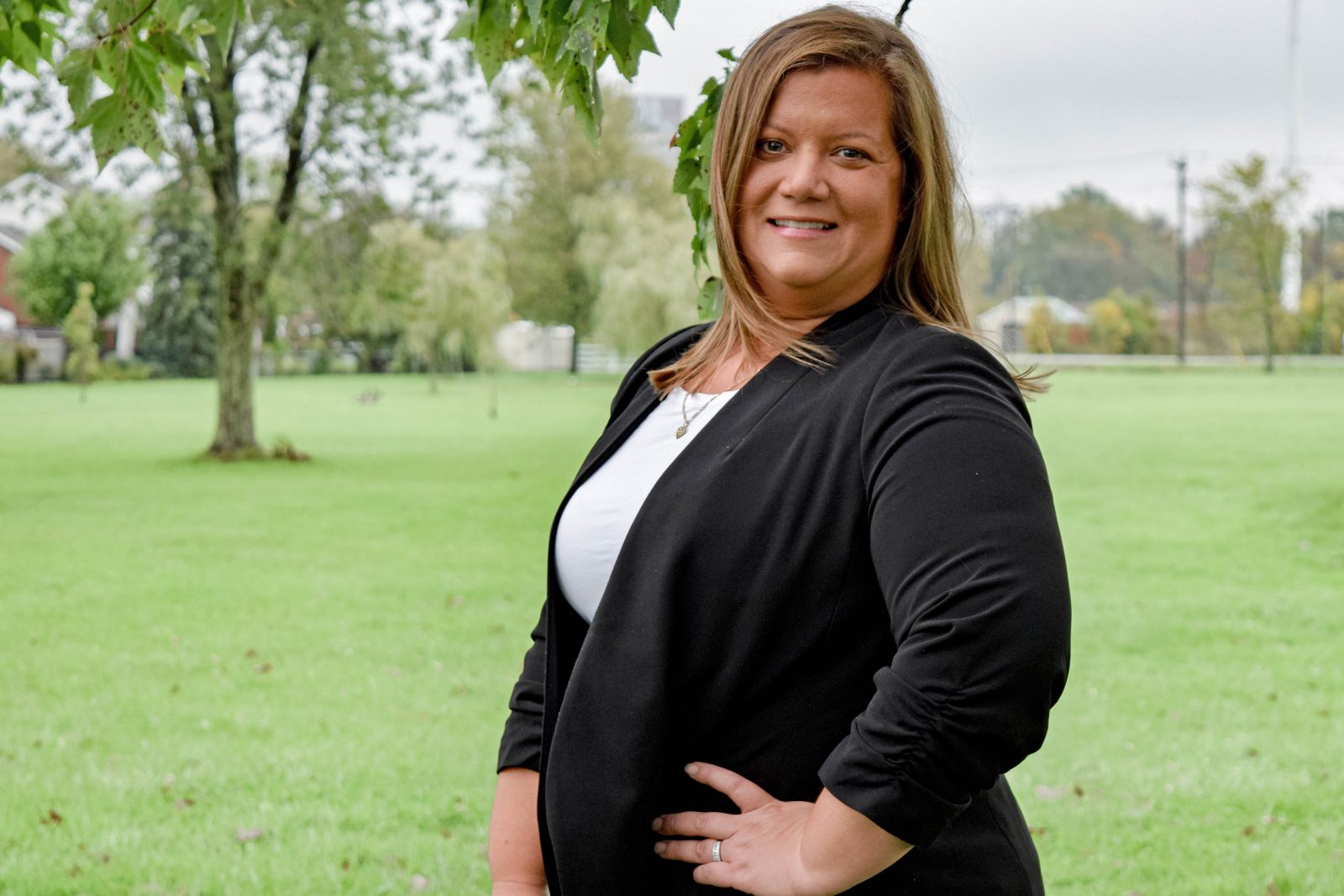 Amanda Smits is the 2021 recipient of the Faculty of Social Sciences Staff Student Experience Award. (Photo courtesy of Hannah Donofrio)

Amanda Smits (MEd ’17) has a knack for spotting potential links that could benefit students, researchers and community partners. And she isn’t afraid to speak up about them.

Her ability to connect the dots recently led to Smits, the Environmental Sustainability Research Centre (ESRC) Administrator, being announced as this year’s recipient of the Faculty of Social Sciences Staff Student Experience Award winner.

“Working with students is one of the highlights of my role here at Brock, and I can’t help but notice ways — almost daily — that I can help to create connections and experiences for them,” says Smits. “We are so fortunate to have several partnerships with community organizations where making these experiences come to life, even in the virtual world, is completely possible.”

Smits also previously received the Staff Community Engagement Award for the Faculty in 2019.

But she is quick to point out that she is part of a large community of staff members committed to creating the ultimate experience for Brock students.

“There are many other staff members within the Faculty and across Brock who are doing this same type of work each and every day to find ways to create amazing experiences for Brock students,” says Smits.

Smits worked closely with students for several years in Recreation Services before joining the ESRC in 2017.

“I’ve come to realize there are so many different ways to help make connections between students and faculty, whether through different research projects faculty may be working on or community partnerships they may be a part of,” says Smits. “It obviously does take extra time and effort, but in my experience, it’s always been worth it.”

She also credits the open ears and minds of faculty members in the ESRC, as well as their willingness to put in the extra work that developing rich student experiences requires, with the Centre’s success in this area.

Smits encourages other Brock staff members not to shy away from sharing their ideas with colleagues.

“I’m not scared to bring ideas forward — and not every one of them has worked out,” she says. “There have been ones that are flops, and that’s OK, too, because the results of the successes can have a lasting impact on students’ career trajectories.”

Smits knows when efforts are paying off because she hears from students, who often reach out to thank the team. She has also gotten great feedback on course evaluations, including a course she recently began teaching for undergraduate students in the Minor in Environmental Sustainability program.

“I started teaching an internship course last winter where we match students to a partnership or project we’re working on,” says Smits. “Really working closely with those students was a huge turning point for me because the feedback was amazing. Even afterward, they’d reach out with ideas for the future, so you can really tell it’s had an impact on what they want to do with what they’ve learned in the program.”

Sustainability has long been a personal passion for Smits, who completed her Master of Education in Administration and Leadership at Brock in 2017. As part of her degree, she took a course in Sustainability through the ESRC and went on to write her major research paper about sustainability policies in post-secondary institutions, with a focus on Brock’s Sustainability Policy.

By 2018, she was helping to lead the development of a full Environmental Sustainability Plan (ESP) for Brock, which grew out of the Brock University Project Charter, launched that same year. She continues to collaborate with colleagues in Facilities Management and several co-op students, for whom she has worked to secure Canada Summer Jobs funding and research assistantship opportunities.

“The ESP is a really great summary of what had been done to date in terms of Sustainability at Brock, and we already have it on our radar that it is going to need to be revisited sooner, rather than later,” says Smits. “In the last few years, our partnership team has been able to pull together a full Sustainability Tracking and Ratings System (STARS) Assessment in which Brock was given a Silver Ranking. We could not have undertaken any of these large-scale projects without the assistance of Brock students.”

The Project Charter partnership has been so successful that Smits and her colleagues in Facilities Management have been invited to present on their work at conferences, sometimes having to convince their audience that co-operation between the two very different units is possible in pursuit of a common and indisputably important goal.

“It’s a pet passion project of mine,” says Smits. “I think of universities as small cities that need to recognize the impact they’re having.”

Associate Professor Marilyne Jollineau, Graduate Program Director in the ESRC, says that while she submitted the award nomination, all of her ESRC colleagues were unanimous in their belief that Smits was deserving of the award.

“We believe Amanda should be recognized for her extraordinary contributions to graduate and undergraduate student experiences at Brock,” says Jollineau, who adds that Smits’s efforts to celebrate student achievements were actually too many to include in the nomination package. “Amanda is an exemplary staff member, and we are tremendously proud and grateful that she is being recognized with this award.”

Ingrid Makus, Dean of the Faculty of Social Sciences, says that Smits shows the type of initiative and creativity that can be truly transformative in an academic environment.

“The FOSS Staff Awards were created to recognize exceptional efforts from staff members in the Faculty, and Amanda has repeatedly demonstrated her commitment to graduate and undergraduate student experience in ESRC and beyond,” says Makus. “The award is a testament to her professionalism, resourcefulness, responsiveness, thoughtfulness, inclusiveness and positivity.”