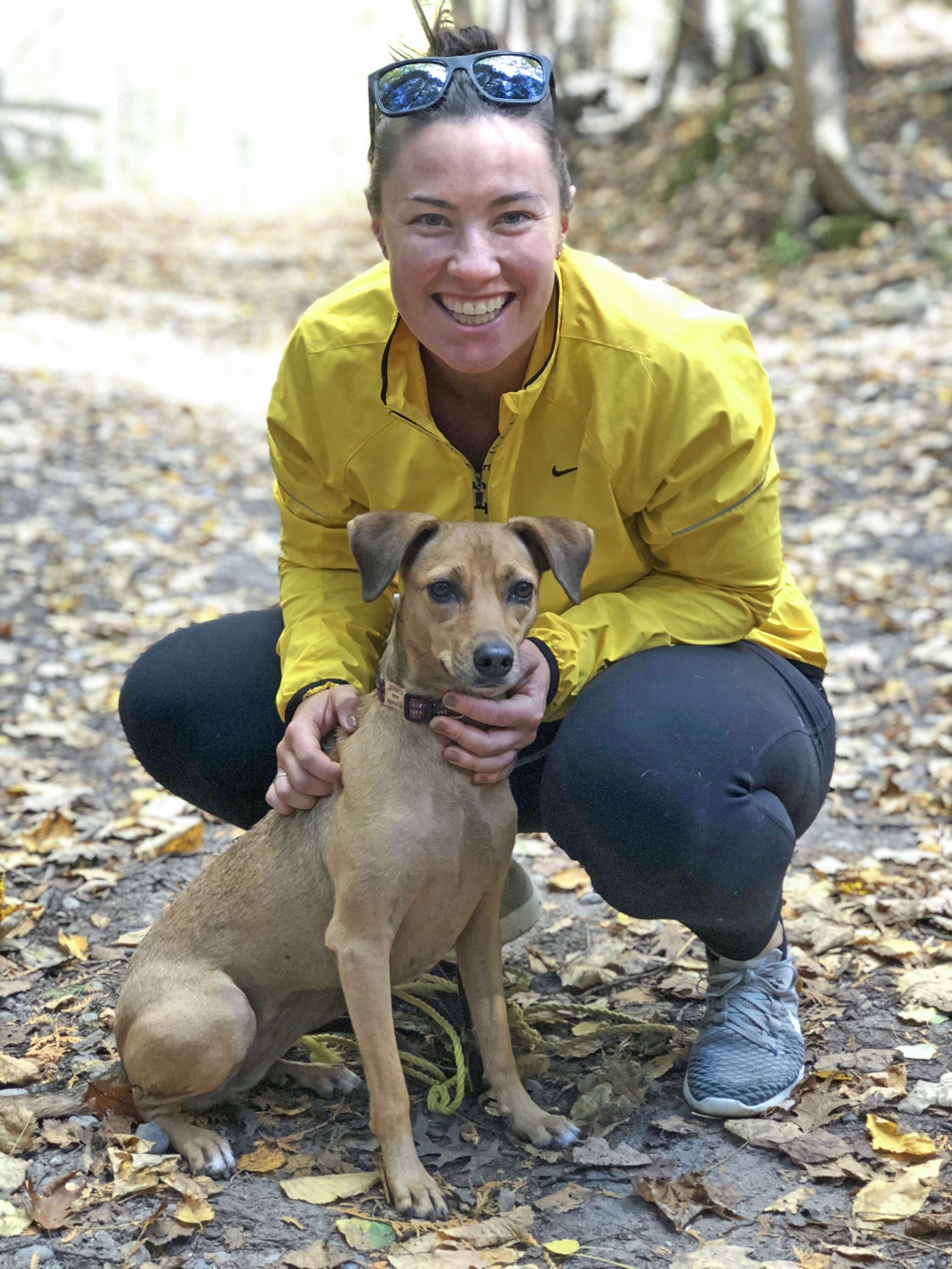 Corliss Bean, Brock University Assistant Professor of Recreation and Leisure Studies, and her rescue dog Jassie spend as much time as they can exploring outdoors.

Four simple words that struck Corliss Bean so deeply when she first heard them years ago that they still hold a permanent place in the back of her mind.

For Bean, the phrase is about providing opportunities and breaking barriers in the context of women’s sport, as female athletes cannot be what they cannot see.

The notion that seeing a strong female leader could inspire the next generation to reach those heights left an indelible mark on the Brock University Assistant Professor of Recreation and Leisure Studies. It has impacted the way she approaches her research, her work with various community groups and her interactions with students. 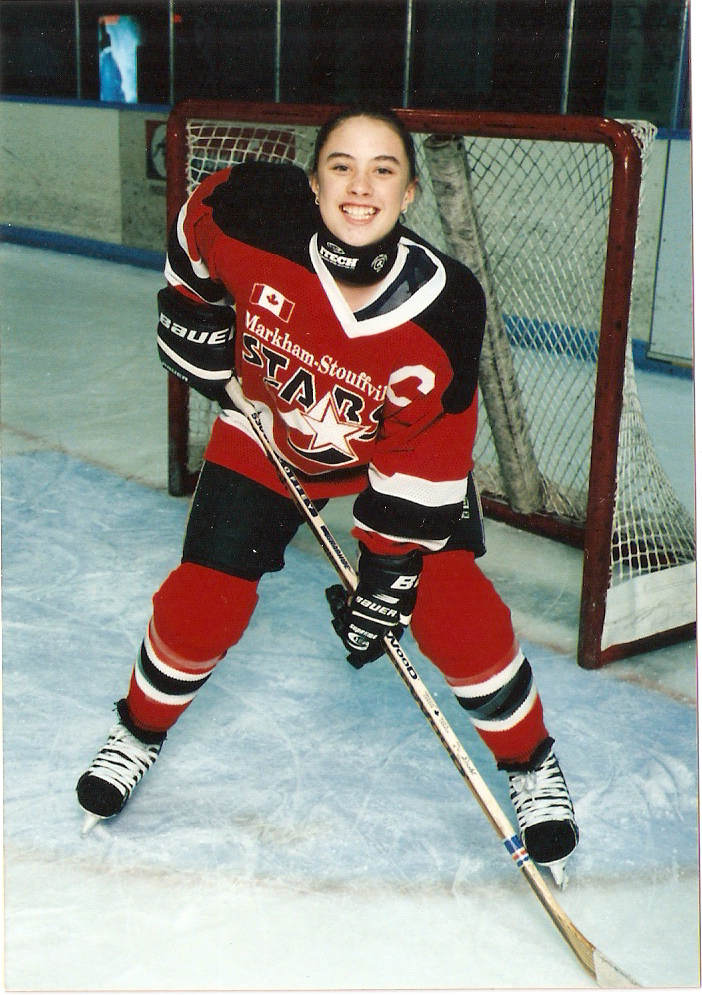 Corliss Bean, Brock University Assistant Professor of Recreation and Leisure Studies, grew up with a passion for hockey. She is seen here in her hockey gear at age 10.

The phrase has also recently taken on new meaning as Bean became a new mom.

“I love the fact that my son can see me — it’s not just about being a role model or mentor for other girls and women — I can show him that women, and specifically his mother, can be physically and mentally strong and independent,” she says. “That’s so important to me.”

Bean has never been one to abide by gender stereotypes.

The daughter of an avid hockey fan, she didn’t hesitate to strap on her skates and hit the rink at only age four. As her skills improved with time, she worked her way up from house league to the competitive ranks, where she remained until well into her university days.

It was an opportunity to play hockey at the varsity level that led her to the University of Ottawa.

“When I started there, I didn’t really know what I wanted to do as a career,” Bean recalls, “but I knew I liked sports, so I went into Human Kinetics.”

In her third year, she took a Community Recreation and Sport Programming course that changed everything.

“I just fell in love with the content, and I haven’t looked back since,” Bean says of the class that helped her chart the course towards her future.

Despite finding her niche in understanding youth sport as a context for personal and social development, Bean was unsure if she would remain in academia or take a more applied route given her community-engaged approach to research.

“I wanted to ensure whatever I ended up doing for a career made an impact in the community,” she says, adding she considered instead going to work directly with community agencies, such as the Boys and Girls Club.

But Bean, who joined Brock’s Faculty of Applied Health Sciences in July 2020, ultimately realized there was a way to combine her passions for research and community engagement, and to have a broader impact in areas that have played a big part in her life.

“I really love working with organizations from community to national levels to develop, implement and evaluate programs with the goal of teaching life skills,” she says. “I work with these organizations and their stakeholders to understand how they can intentionally structure their programming so that kids are developing both the physical and psychosocial benefits of sport and physical activity participation.”

While Bean’s time in hockey came with many life lessons and the development of crucial life skills, she feels she could have learned more had time and space been carved out by coaches to discuss those pivotal moments in an intentional way.

“A lot of what I do now is around coach and athlete education on how you can intentionally teach and learn life skills through sport,” she says.

Bean, the Co-Director of Brock’s Centre for Healthy Youth Development Through Sport, is working with Margot Page, the University’s women’s hockey coach, on a project called MVP Full Circle in partnership with the St. Catharines Female Hockey Association Jr. Badgers. Through the initiative, they’re conducting life skills workshops that touch on topics such as building confidence, accountability and self-compassion.

The project is fully staffed by women in hopes of inspiring the young female athletes to embrace the ‘see me, be me’ concept.

“We want them to see these strong female leaders — whether that be in a role of a coach, official or researcher — and see themselves in us,” Bean says. “I think it really helps to have these intermediary mentors who are close to the athletes in age — they’re within arm’s reach. We want them to think, ‘I can see myself being that person in five or 10 years.’” 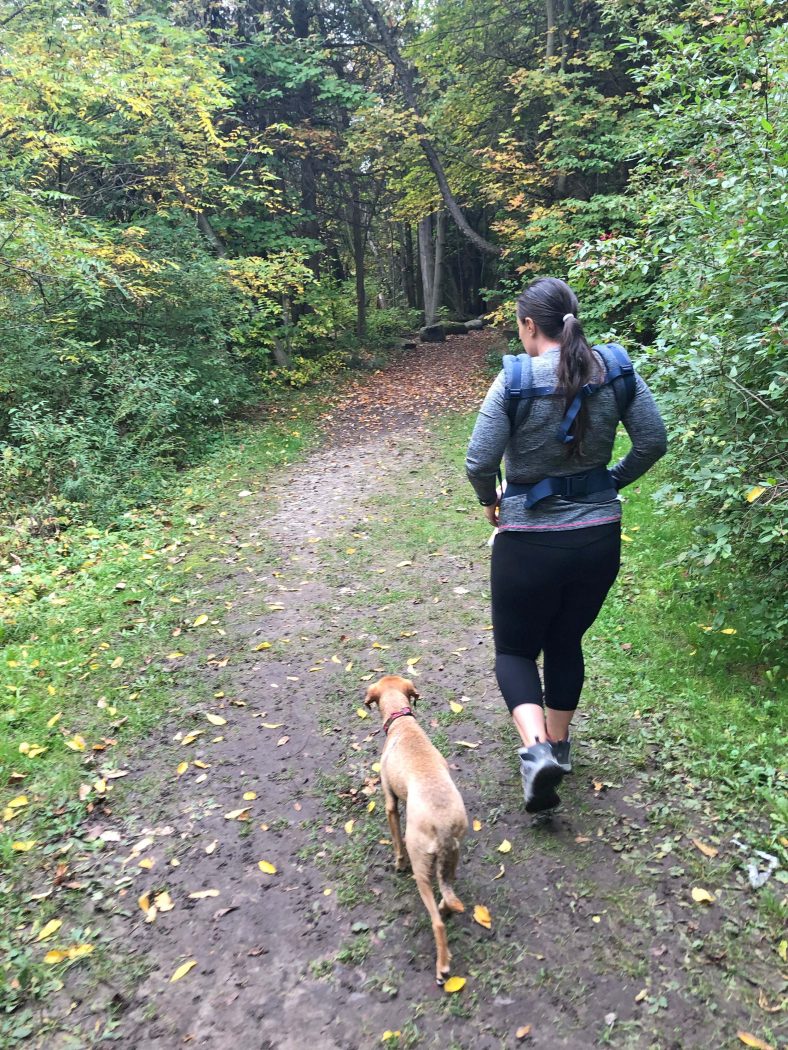 After recently welcoming her first child, Corliss Bean is working on a project that aims to understand postpartum physical activity experiences in new mothers.

And that concept is not exclusive to sports.

During her time in academia, Bean has experienced both people who have been ahead of her in their journeys that she’s looked up to and has been told that she herself has been that person for others who are just beginning to navigate their life path.

“The dynamic shows how impactful and important role models and mentors are both in academia and in sport,” she says.

Bean also has a personal connection to another initiative she currently has underway while on her parental leave.

“It’s interesting because I’m living and breathing this right now,” says Bean, who has made it a point of re-engaging in physical activity immediately following her son’s birth four months ago.

“I know how valuable activity is for my physical and mental health, so I figured while I’m living it, why not study it,” she says. “One of the perks of academia is being able to study what you’re interested in and passionate about.”

Bean’s research study is currently looking for new mothers within their first year postpartum to complete a survey and/or engage in an interview that explores their physical activity experiences during motherhood.

Through the project, Bean will work with SIRC to create an educational video featuring experts addressing many of the common questions new mothers have in relation to becoming or re-engaging in physical activity within the first year of motherhood.

“Knowledge translation is something I make essential within all of my research. I think it goes hand-in-hand with the community engagement aspect,” Bean says, adding organizations benefit from tangible evidence that can easily be integrated and shared within their organizations and associated channels.