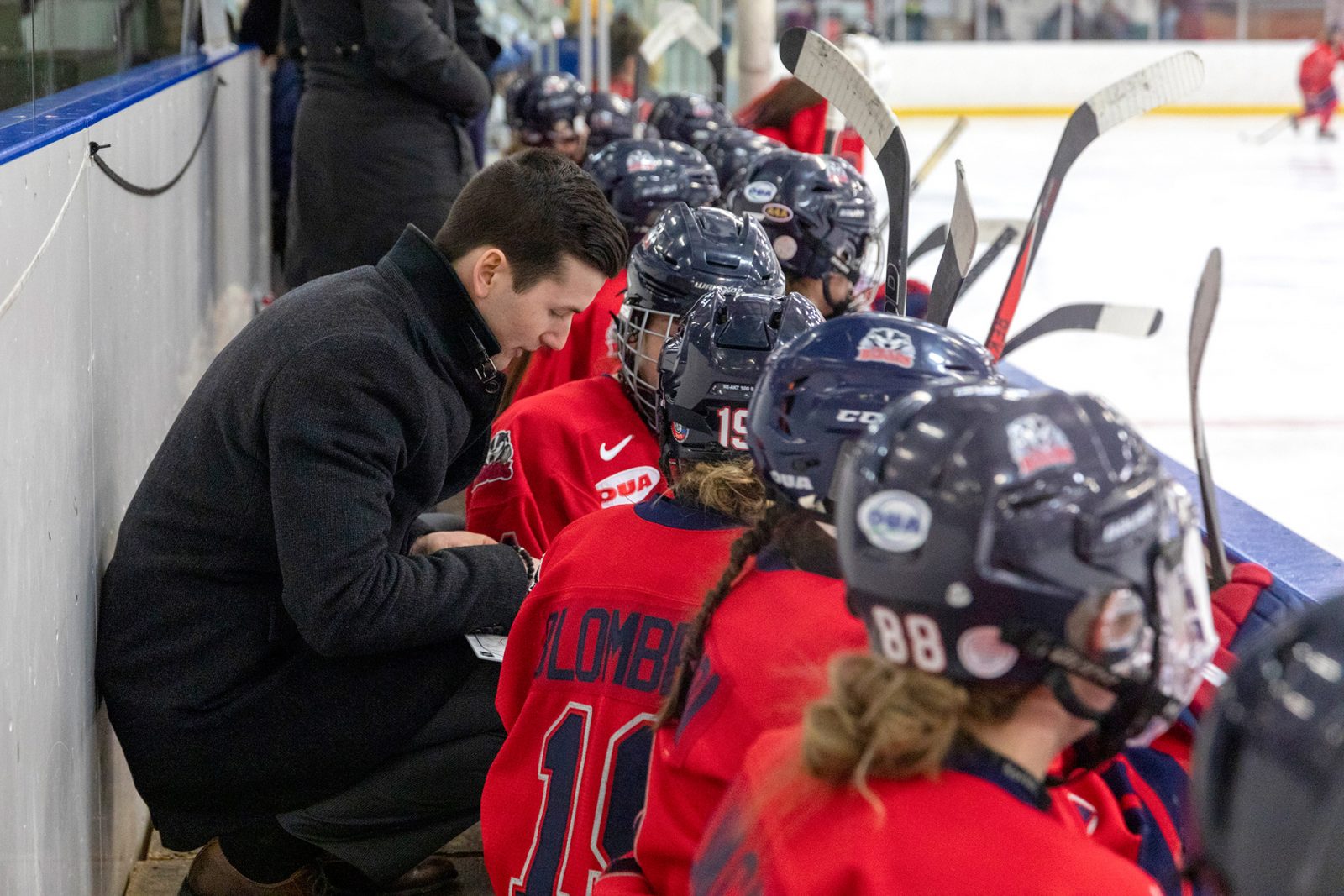 Assistant coach Josh Mallory of the Brock women’s hockey team has been hired by the Edmonton Oil Kings as their new Video Coach and Hockey Operations Co-ordinator.

A major junior hockey franchise in the Western Hockey League (WHL) has hired a Brock Sport Management grad who also served as an assistant coach with the Brock women’s hockey team.

While the new opportunity means a cross-country move for the Brock Sport Management alumnus and current master’s student, he plans to continue his studies with the University.

Mallory wore many hats during his three seasons with the Brock women’s hockey team, including director of analytics, general manager and assistant coach.

He focused on Brock’s player skill development and enjoyed poring over the team’s statistical analysis while designing their power play and coaching the forward group.

Mallory credited his time spent working with the Brock women’s hockey team with shaping who he is as a coach, and as a person, today.

“It was a truly integrated experience for my personal development,” he said. “Being able to gain valuable, real-world experience in coaching and hockey operations at a high level aided my growth as a coach exponentially.”

Badgers head coach Margot Page believes the Oil Kings will continue to be impressed with Mallory as he begins in his new role.

“What an outstanding hire by the Oil Kings. Josh has been such an integral part of our growth with the women’s hockey program at Brock,” Page said. “We will miss his passion, tireless work ethic and amazing analysis and insights into the game.”

Page’s coaching style and communication with players had a big influence on the way Mallory approaches the sport today.

“Margot is an incredible human being. She’s a caring and compassionate coach and an incredibly patient teacher,” Mallory said. “The list of things I’ve learned from her is honestly too long to summarize. She showed me what it looks like to be a forward-thinking, open-minded and caring leader.”

During his time with the Badgers, Mallory witnessed the hard work Page and staff put in to creating a welcoming environment to focus on learning and development.

“Margot always pushed me to be my absolute best and always did it out of her belief in my abilities. I can’t thank her enough for everything she’s done for me since I joined the program,” he said. “Margot allowed me to contribute my thoughts and philosophies on hockey to the Badgers program.”

A native of St. Thomas, Mallory is looking forward to his new role with the Oil Kings, who operate and play out of Rogers Place arena — also home to the NHL’s Edmonton Oilers.

He will manage analytics, pre-scout opponents and work directly with the coaching staff with video, including assisting the Hockey Operations Department with league administrative tasks.

“There’s a special opportunity with each player to influence real change in their performance when you focus on the element of player development,” Mallory said. “The process is different for each player, but that’s the beauty of it all as you work together to identify an area of development and put in the work. It’s a rewarding feeling seeing hours of work that a player puts in get rewarded.”