Much work to be done on live theatre’s road to recovery, says Brock prof 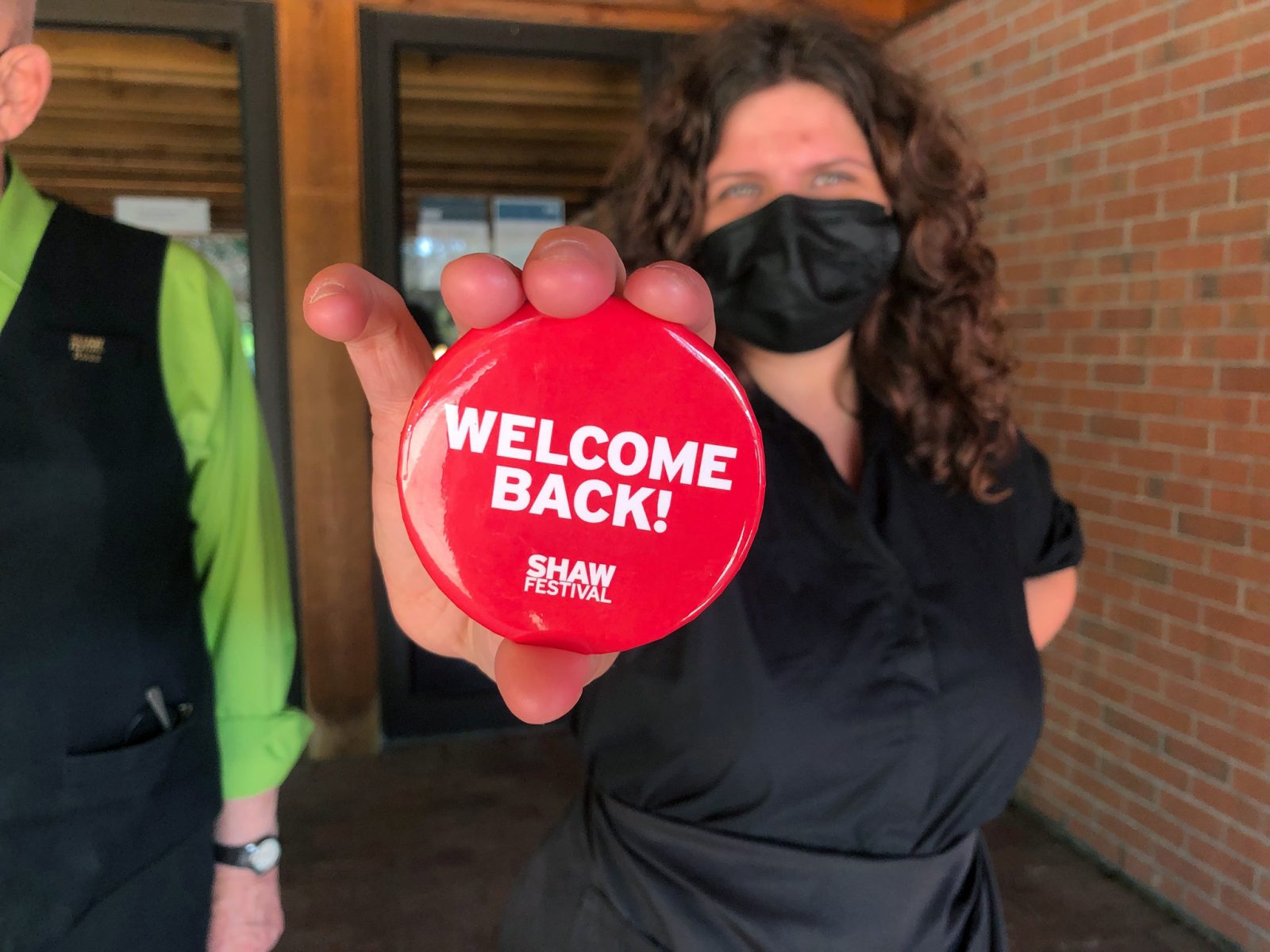 Brock Dramatic Arts graduate Amanda McDonnell (BA ’15), who is part of the front of house team at the Shaw Festival, welcomed audiences back this summer.

After 17 months, the live theatrical experience is slowly making its return — but not without challenges ahead, says Brock theatre expert Karen Fricker.

“Amidst the adversity that live performing arts have been faced with through the pandemic, a wonderful thing has happened this summer: the return of live theatrical performance, because it has been able to be outside,” says the Associate Professor and Undergraduate Program Officer in Dramatic Arts (DART), who is an expert in theatre criticism, theatre theory and contemporary theatre.

The Shaw and Stratford Festivals, two of Ontario’s most celebrated repertory companies, have been staging performances outdoors under canopies (tents with no walls) with mandatory masks for audiences in addition to capacity limits in accordance with provincial guidance. Both festivals are taking audience, artist and staff safety seriously, with COVID-19 protocols in place, says Fricker, who is also a theatre critic for the Toronto Star, writing about performances in the city as well as the Shaw and Stratford Festivals each summer.

Although these outdoor performances do not come close to hosting the usual number of spectators, Fricker says this is a “big step in the right direction.”

“Artists are being paid and creativity is happening,” she says, adding that while “innovative digital work has been heroic during the pandemic, experiencing live performances in a shared space is a joyous return.”

Brock’s Dramatic Arts Department engages with the Shaw Festival in numerous ways, including the annual DART/Shaw internship and course-based experiences with Shaw artists and arts workers. A number of DART students and graduates work at the festival in front of house, producing and administration, and creative capacities.

Seeing some of those familiar faces at Shaw this summer has been a particular highlight, Fricker says.

While outdoor performances are a step in the right direction, Fricker says there is still more work to do. There will be limited live, in-person programming in the performing arts sector this fall, mainly due to unclear guidance from the provincial government around reopening, she says.

In the early summer, the performing arts industry lobbied the government to address live performances in the official stages of reopening. Now that the performing arts have been included, companies have been able to plan. However, “you can’t just lift a theatre production off in a few weeks; you need a runway,” Fricker says.

Colleen Smith, Executive Director of the FirstOntario Performing Arts Centre (PAC) adjacent to Brock’s Marilyn I. Walker School of Fine and Performing Arts, says the team at the PAC has experienced these challenges first-hand.

“Never did any of us whose lives revolve around bringing together artists and audiences believe that we would witness the end of the age-old adage, ‘the show must go on,’” she says. “In fact, the show stopped for months at a time. It’s been an unbelievable period of disruption, heartache and loss of purpose for so many artists and arts workers.”

Smith says that “buoyed by our partners at the City of St. Catharines and Brock University, as well as the support from our Board of Directors, we have used the first half of 2021 to develop a three-year recovery strategy that will place the PAC firmly within our community as a centre for creative and artistic experiences and learning.”

The PAC is planning a gradual return, starting with the annual Celebration of Nations gathering, which will be in a hybrid format in September.

Among the local theatre organizations taking important steps to make innovative work and engage the public in Niagara safely is the young people’s theatre company Carousel Players, which is focusing on new play development in August and September.

“We are experimenting with a range of forms, including clown, puppetry and mask,” says Artistic Director and Brock graduate Monica Dufault (MA ’11). “We want to offer new pieces that are dynamic and theatrically alive when we meet our audiences again.”

The company will present an outdoor performance, The Giant Puppet Party, for Culture Days in October, a new digital play for ages 12 to 17 called Meet Chloe starting in November, and a school touring production of The Velveteen Rabbit for ages four to seven in March 2022.

DART graduate Deanna Jones (BA ’02), the Artistic Director of Suitcase in Point and In the Soil, says the limits of the last 17 months have been a “unique test on our arts organization and the arts community at large.”

“We knew this 13th edition of our annual In the Soil Arts Festival would be different, and we were determined to find inspired ways to get off of our screens and offer artists and audiences safe ways to connect — in person.”

During In the Soil, artists from Essential Collective Theatre will be set up on James and St. Paul Street interviewing community members about their pandemic experiences. Working on this initiative are DART graduates Jordine de Guzman (BA ’20), Kristina Ojaperv (BA ’19) and Ren Reid (BA ’20). The project will culminate in the Pandemic Stories Project, a new play to be read at St. Catharines’ Culture Days in early October.